The sudden death of Dr. Pius Adesanmi once again brings into the fore the age-old question: Why do good people die young? When good people die young, we feel devastated because we have lost something precious. Our hearts are ripped apart and left with a gaping hole. We wonder and we question why they were taken away from us. “He was such a good person, why would God kill him?” “She was so young, why would God call her home so soon? She never got a chance to live!” “He didn’t deserve to die.”

We are confused, angry, and bitter. We try to come up with different reasons why good people are taken away by death while wicked and evil people are spared. Some people believe God decides to take good people to save them from something bad. Others say may be God wanted another angel in heaven.

I don’t just get it! Why do good people die young? I have lost a number of friends who were the best people I know. I can also think of bad people who are living longer than expected. Where is the justice? Can anyone make sense of this upside down world? We feel robbed when good people die young. We feel we have been robbed by a robber. We see it as the greatest absurdity. We become hopeless and senseless. The pain and sorrow are burned into our memory for life.

Knowing the fragility and brevity of life, Adesanmi worked round the clock believing in Jackie Robinson’s philosophy that “a life is not important except in the impact it has on others. Adesanmi made an impact on us the way atomic bomb does: He imploded before he exploded! His mind was never at rest, and his pen is connected to his mind by the best conductive narrative magnet we’ve ever seen. He developed a reputation for ruthlessness with the enemies of our poor people – Nigeria’s ruling ragamuffins.

Thoughtful and tough, passionate and strategic, outgoing and introspective, Adesanmi was always worried and troubled about defenseless, forgotten, unemployed, downtrodden, excluded, impoverished, marginalized Nigerians. He was always willing to wade in where and whenever justice is on trial. He was a giver, not a taker. He served others to help them grow and thrive. He solved problems that could prevent others from reaching their potential. He saved causes that benefited mankind.

Looking at possible reasons why some good people die early, author Nayaswami Pranaba says “Sometimes an early death could be a blessing; a person may simply have worked out as much of their karma as they are able to do in their current lifetime, and that’s far as they’re going to go. One way of looking at karma is that an accident is a relatively quick way to move on.”

For author Amanda Linette Meder, “An early death for some souls also holds another possible reason – a reason related to the core of the human soul. The desire to make a difference. All humans have the desire to make a difference in people’s lives is far stronger than in others. For some souls, once they become well networked in their lives, have built friendships, relationships, held bonds with many people, live many places, they die. Suddenly.”

The three key stages of life for a proper and complete life cycle are: being young, being adult, and being old. But our best option is to live a quality life in the moment. A quality life includes struggle, happiness, wins, and losses. When someone good die young, we assumed wrongly that they died before their time and that we have unwritten promise of a long life. The truth is, “there is a time to be born, and a time to die.” As to when we are born and when we die, we don’t really have any say regarding our birth and death.

Pius Adesanmi was only 47 years old. It was said that he had confided in a friend that he would not live to be 50. It’s not unusual for rare breeds like him to predict their own death. They all saw it coming. President Abraham Lincoln recounted a dream he had to a friend, Ward Hill Lamon. He told Lamon he had heard mourners sobbing and saw a corpse lying on a raised platform in the East Room of the White House. He asked a nearby soldier who had died and was told, “The President – he was killed by an assassin.” Ten days after having the dream, he was shot dead by an assassin at the theater.

Bob Marley revealed details of his death to his friends. He told one of his friends that he would die in his 30s. Marley died at age 36. Dr. Martin Luther King Jr., said: “… I’ve seen the promised land! I may not get there with you, but I want you to know tonight that we as a people will get to the promised land. Dr. King was shot dead the second day.

But the question remains: Why do good people die young? Who are we to question God? As a Christian, I believe the Books of Job (14: 1-2) and Prophet Isaiah (45:7) adequately answered the question. Job (14:1-2) reminds us that “Man who is born of woman Is of few days and full of trouble. He comes forth like a flower and fades away; He flees like a shadow and does not continue.” Prophet Isaiah (45:7) perfectly sums it up: “I form light and create darkness, I create peace and I create calamity. I, the Lord, do all these things.”

But we should celebrate Adesanmi’s brief stay with us with a heart of gratitude that he was given to us in the first place. We are blessed to have a wonderful man in our lives. The world is privileged and is made a better place to have such a “heavenly guest come down to earth.” Though Adesanmi was on a short visit, he gave us his all. He left his foot prints. He lives on.

We were born to die. The lesson from it all is that we have to cherish everyday because we never know when it will be our last. We have to treasure those we love because they may not be here tomorrow. In the end, how we live is more important than how long we lived. Adesanmi lived a full and meaningful life. 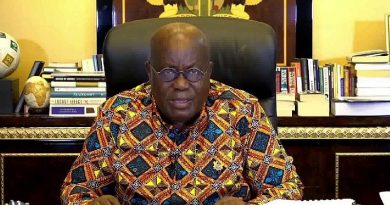