Former President Goodluck Jonathan leads an array of Peoples Democratic Party (PDP) leaders to have called Otunba Gbenga Daniel, former Governor of Ogun State, to convince him to rescind his decision to leave the party.

Daniel announced his exit from the PDP and from partisan politics on Saturday, saying he wanted take on “new challenges”, which include rejuvenating his charity-based organisation, the Gateway Front Foundation (GFF), and resuscitating the “non-partisan Political Leadership Academy (POLA)”, which was “established some years ago as a platform of political education to our citizens”.

However, notable PDP leaders, including Jonathan have been calling him to have a rethink.

Having earlier reported the real reason’s behind his exit, SaharaReporters understands that Daniel informed Atiku Abubakar, whom he served as Director-General of his presidential campaign orgnisation, as well as Jonathan, before publicly announcing his decision.

Atiku said it expressly that he couldn’t leave, while Jonathan encouraged him to “reconsider and consult widely” before taking a final position.

SaharaReporters confirmed that when Daniel made the decision public on Saturday, Jonathan called again to make a last-ditch attempt to change his mind, saying specifically that “PDP still needs his participation in the party”.

SaharaReporters has also been told PDP stakeholders, particularly from the North, have been rejecting Daniel’s resignation from the party.

“Calls across the country have been coming; the major stakeholders in PDP have been telling him not to leave, but he has been insisting he has not taken a position for now,” a source close to Jonathan told SaharaReporters on Tuesday.

“PDP stakeholders across the North, governors and former governors mainly from the North, they’ve all reached out to him.”

Also, a Lagos PDP source told SaharaReporters that Daniel’s exit will further deplete a party serious struggling to hold some influence in the South-West.

“If he leaves, the PDP in the South-West will be left without a leader,” he said.

“Fayose has been unable to hold the PDP in the South-West since leaving office as Governor of Ekiti State. Lagos PDP is boiling with issues. You can imagine a party chieftain, Segun Adewale, locking up the PDP secretariat and declaring himself the authentic Lagos PDP chairman in place Adegbola Dominic, who was attending a meeting in Ibadan. There have also been complaints of the siphoning of campaign funds in Lagos.

“So, PDP is in crisis in Lagos. In Ogun, it is non-existent. The only place it exists is Oyo State. Fayose is fighting in Ekiti with Abiodun Olujimi. So, PDP leaders feel they still need Daniel’s leadership to hold the South-West together.”

The PDP has not yet formally taken a stand on Daniel’s resignation; however, this could happen at an emergency meeting of its National Executive Committee (NEC) scheduled for Tuesday. 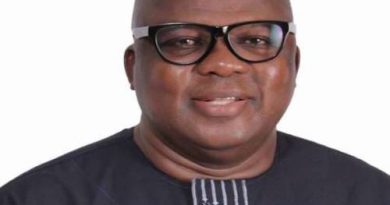 Jakande: Ilesa Grammar School, And The Immortality Of His Legend, By Shola Oshunkeye