The much-anticipated general elections in Nigeria had come and gone with controversies still trailing them. To the surprise of a few amongst us perhaps the presidential, legislative and gubernatorial polls produced violence, death, injuries and injustices. Generally local or national elections in Africa often represent sources of blood-letting, thuggery, electoral violence and manipulation of votes and voters. Nigeria is never an exception in this regard. Sometimes electoral seasons signalled a return to war-zones in the cities and villages as ‘prisoners’ are taken and booty carted away as it were.

In Nigeria it was the same old story of lack of complete independence of the electoral umpire (INEC), the deployment of incumbency factor to the advantage of those in power, vote-buying and ballot-box snatching etc. Since independence in 1960 there was no election held in Nigeria without much to talk about in terms of rigging, under-age voting, importation of foreigners (especially in the far-north) to vote and logistical failures.

Last February 23rd and March 9th respectively Nigerians went to the polls to decide who governed them at the federal and states’ levels. This year’s electoral edition gave birth to more controversies and surprises than the previous exercise four years ago. Then in 2015 the then President Goodluck Jonathan had played a statesman by gracefully acknowledging his humiliating defeat — calling the winner (now President Muhammadu Buhari) to offer his congratulatory best wishes. But whether he would have done otherwise is still left in the realm of conjecture.

But the presidential poll of this year featuring Buhari and the opposition PDP’s Atiku Abubakar as frontrunners generated more political heat, hits and misses. Atiku officially ‘lost’ and Buhari ‘won’ by a huge margin of over four million votes, or so we were made to believe. Atiku has doggedly refused to accept his fate denouncing militarisation of the process and manipulation of results by the ruling APC and the forces behind them.

The Wazirin Adamawa is currently locked in a potentially protracted litigation at the Election Petition Tribunal to reclaim the “stolen mandate”. The global community are watching and following events as they unfold with serious attention. It is agreed generally that it is within Atiku’s right to seek rdress in a court of competent jurisdiction rather than settling for self-help or violence.

The Nigerian democratic space has witnessed lately a whole lot of activities bordering on recriminations linked to the outcome of the polls. And the Nigerian factor has reared its ugly head in the process. Former Vice-President Atiku’s decision to challenge the re-election of the incumbent President would certainly enrich our democracy rather than threatening same. While the Election Petition Tribunal has commenced sitting they are yet to deliver the final binding verdict.

But expectations are high in many quarters that the Tribunal may not deliver justice to the Atiku camp given the Nigerian factor. Justice in Nigeria is not only corrupt but the powers that be often manipulate same for their selfish political interests. Besides, one can ‘buy’ justice with money and/or connections. If in any doubt then ask the former Rivers State Governor, Peter Odili, an expert in judicial merchandise!

So very little hope exists of the possibility of the Tribunal doing justice, doing the right thing by emulating the Kenyan Supreme Court. Last year in Nairobi, it would be recalled, the Supreme Court had delivered a monumental judgement annulling the controversial re-election of President Uhuru Kenyatta thereby vindicating the position of the opposition leader Raila Odinga who declared and proved that the presidential poll was systematically manipulated in favour of the incumbent Head of State.

The Kenyan presidential poll was re-done but surprisingly Odinga renounced his re-presentation or participation for cogent reasons he had elaborated. He had backed out of the poll because of the existence of a non-level playing field and the repeat of what he had denounced as a fraudulent process. Yet rumours had started flying around, upon the sudden withdrawal from the race, that Raila may have been blackmailed into submission!

Ever since President Buhari won re-election in a controversial fashion few weeks ago the nebulous Nigerian factor has come into play, to wit: politicians paying homage and congratulating him hypocritically, traditional rulers visiting Aso Rock to pledge their loyalty to the system, political groups, in their notoriety, struggling to outdo one another to register their adherence to Buharism. All of whom, without exception, had been urging Atiku Abubakar to forgo his legal challenge to the Buhari victory for ‘peace to reign’. Utter balderdash!

Pray, did the man they were visiting in Abuja on three consecutive occasions not reject his glaring defeat at successive presidential contests involving him and took matters to the court for redress? Did he not unconvincingly blame the PDP rigging machinery each time he was handed a resounding short end of the stick? Did he not go to the violent extreme of promising ominously that the baboons and monkeys would be soaked in blood in the event of the 2015 presidential election not going his way?

It is unfortunate that we have a semblance of democracy (no matter how ugly its face) but one without democrats! From every stretch of imagination President Buhari himself, with all due respect due him as the number one citizen, cannot be described as a democrat. As a former military tyrant Buhari has constantly manifested, in and out of power, anti-democratic tendencies and attitudes inimical to the advancement of the democratic dream. He always spoke glowingly about his military exploits even in a supposedly democratic setting! Besides, true democrats are never involved in coup-plotting yet Buhari was a proud coup plotter that once truncated democracy!

Since 1999 Nigeria could be described as a democracy struggling to find her feet. As the largest democracy in the sub-Saharan Africa challenges lie ahead as never before. Though imperfect from practically all indications the giant of Africa has miraculously weathered the democratic storm post-June 12, that day of infamy in 1993 when democracy triumphed but was criminally killed by the Babangidaised hubris. Today, though abused here and there, now and then, democracy has come to stay in our land.

Nigeria is hopelessly operating a poorly-rated mediocre democracy manned by poorly-rated mediocre ‘democrats’! Pseudo democracy and pseudo democrats! Rather than being remembered for quality services to the country they are rather remembered for the millions and billions of Dollars they looted from the state treasuries! Pity! From the man at the very top down to the political thugs and killers on the streets the hope for a better nation is already compromised in our reckoning.

If democracy aside meaning government of the people by the people and for the people could be associated with spreading freedom, pursuing justice and fostering national integration then we have collectively failed to live up to that expectation.

Penultimate Sunday I was terribly shocked to learn online of the tragic passing of the prolific writer, teacher and philosopher, Prof. Pius Adesanmi. He was among 157 people that perished in the Boeing’s 737 Max 8 Ethiopian Airlines flight that crashed fatally soon after take-off at the international airport in Addis Abeba, Ethiopia.

Few years ago while on a sabbatical in Paris, France, I had exchanged some emails with Pius. We never had the opportunity to meet one-on-one. He read my articles religiously and I read his as well. The ‘pious’ Pius had left us too soon too early for anyone to remember the meaning of the ultimate leveller.

It was indeed a sad loss to his friends and family, to us the critics who love our country and to the nation of our birth. We shall all miss you, Pius! 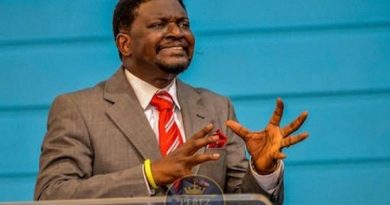 The world looks so special always when individuals keep on working hard to end a living from it. Not too