While I was rushing down to the hospital to see my 48 hour old daughter (my first child), I stumbled on the back page of the Nation Newspaper of Wednesday 13th March and I rushed to read Hardball’s short hits. Alas! Its the same perspective the APC propagandists have been building up on the revolt against Governor Ajimobi of Oyo state.

It is very easy to know when the APC attempts to launder images of the ever-corrupt characters that have been leading its flanks. They start with the petty and grow to the tu quo que. They then conclude by trying to remind us of the fake achievements that the politician must have done before. They never respect the fact that you cannot eat your cake and have it.

Hardball is a very sensitive column. Though always short. It takes on a tricky yet important treatise with satirical and pointal jibes. It started the core of its strategic lies by first comparing Ajimobi with Winston Churchill, that devil incarnate who used most of the wealth of Britain to fight the 2nd World War, and got kicked out by the British people having understood that war is anti-human and meant for the profit of a few over the people. The armament race and the economic power mongering of the capitalist warlords are the primal considerations, not public peace! So, the British were very right to kick the Tory ruler away.

What is the problem, as can be witnessed in Nigeria today and as is mentioned by Hardball in the case of Bill Clinton handing over to Bush, is the fact that the other side of the coin of the same anti-people ruler thrown away takes over most times. This is not complicated at all.

When Goodluck Jonathan was sent packing by Nigerians had no choice than to vote for Buhari who is practically no different. This is just as Atiku and Buhari are believers in the same system. Atiku is only more to the right than Buhari, who is equally a sharp implementer of anti-people and pro-poverty policies like deregulation and naira devaluation. So, that Seyi Makinde may not be a real alternative is the prerogative of the masses. Let no columnist cry more than the bereaved.

Hardball also posited that Oyo has been relatively peaceful under Ajimobi especially on the NURTW usual violence. This is grossly untrue. Ajimobi only settled off the fighters for the time being so as to have a free-going regime. Yet, under Ajimobi, there has been high powered killings one of which was of the Labour party legislator that was killed post-2015 elections. The same Oyo has also been under state violence so far. Schools have been neglected while Ajimobi even wanted to sell the secondary schools. This was massively rejected by probably the largest secondary students uprising in the country ever. Ajimobi also told LAUTECH students to go to hell as he was the CONSTITUTED AUTHORITY. He also failed to pay workers salaries for months while his state casualisation scheme- YES O.

Violence is in many forms and it marshalled the whole of Oyo under Ajimobi in several means. This is why he was rejected at all polls.

On climate change, Oyo under Ajimobi experience a reign of flood yearly. This is despite the a drop-in-the-ocean Mokola bridge his regime constructed. The state is still a very dirty zone, and Hardball should stroll into Ibadan today and see.

As to the issue of education, I have shown above with the students revolts in Oyo that Awolowo’s legacy was on the cross all through.

Agricultural progress still remain largely fallow and Hardball must apologize to Oyo farmers who are still grinding their teeth and sweating profusely with analog farming while mechanisation still remain akimbo.

Hardball and such other APC propagandists should be aware that history has two renditions. One is truthful and sincere, approved by actual events, while the other is being peddled around by dishonest writers who feel history is the object of manipulations. No matter how the piper is paid, he can never wipe the true memories that inspire the gamuts of posterity!

The Media Has Abandoned Its Duty To The Nigerian People, Says Falana 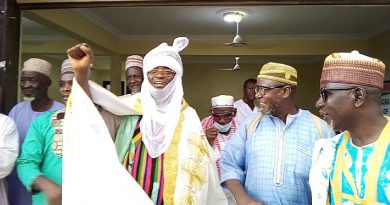 “Fox is terrible!”: Trump rages at network after poll shows him losing to Joe Biden by double digits

“What counts in life is not the mere fact that we have lived. It is what difference we have made