At Saharareporters.com, once you sign up to be a columnist, you inadvertently join a fraternity. I was one of the first members of the fraternity. Then, one day, Pius Adesanmi joined.

As a fraternity, we do not meet in the dead of the night on top of an Iroko tree inside an evil forest in New York City. But when we do meet each other, usually on the road while on an errand, we do say hello, share ground tobacco and famished smile of a people cooked in the same cast iron pot full of roots and leaves boiled in well water distilled with alum. We are cool like that.

In some cases, we do not even meet but we still break digital kola nut and rinse our mouth with e-ogogoro. Meeting in the future is one of those longings that we share, the hope that one day we shall meet at a joint where we will drink palm wine and pepper soup and eat isi-ewu and nkwobi with ewedu and amala mixed in one plate. It is best if such meeting happens where a western Foundation foots the bill. We do these things because we are sons and daughters of the soil.

Some of us who came from Nigeriaworld.com were the Christian Chukwu and the Segun Odegbami of the cyber contact sport. We did it when there was no reward. We did it when there was not a chance to take it to the next level, playing for a premiere league of the world. Pius was with us on Nigeriaworld messageboard. He was one of the quiet and proper ones who wrote with their real names. We were the ogbologbos who howled and yelled under pseudonyms that said everything about our souls.

I don’t remember the first time I spoke with Pius. The only record I have was contact on my Facebook. He had granted an interview to Premium Times. He sent me a link to the interview with a note that read, “I yabbed you in this interview.”

He yabbed me? At that point yabbing me was like pouring degreaser on me.

It was one of those interviews where Pius would go from the magniloquent to the magnificent and from the wahalated to the ogbologbolated.  When I read it, he was responding to the fun I had made of another interview he granted a newspaper. In the interview, he proclaimed that as a public intellectual his only job was to think for Nigeria and Africa. He yabbed me for either not getting it or for pretending not to get it.

So, I yabbed him some more about hanging out with the powerful in society without having the prerequisite big belly needed to navigate the world with ease. I told him it was the reason he won Penguin Prize for African Writing and thereafter the organizers shut down the prize. It was the kind of stretch that would make anyone scratch his head. But we joked like that.

For years, we interviewed Pius on SaharaTV. He was one of our very entertaining analysts. He considered every TV appearance a performance.  In hindsight, it was a performance not necessarily for our audience but more for history. Scrolling through my messages with him, I saw several times when producers who had difficulty reaching him would recruit me to call him. I often would send a message to him and he would usually reply with apologies. His typical apology was that he was about to catch a flight to somewhere or that he was on a flight from somewhere. At other times, it was that other TV networks were interviewing him. He would not say, more important TV network, but it would be implied.

Our relationship grew from there to a point where he would call me every now and then to check on what I thought about matters big and small. His interest was vast – from Linda Ikeji to Beethoven, from Davido to Jean-Jacques Rousseau, from ThingsFall Apartto This American Life Sef. He was that smart.

When he published the book, “Naija no dey carry last,” he called to ask me “how we go do am?” As in how we were going to get the book to the readers. We hatched a plan to have the book given out as a prize for a Dr. Damages competition based on the title of the book. It lasted for weeks.

Payo was pleased. Yes, at this point he had become a full professor and I had now graduated to the class of those who had earned the privilege to simply call him Payo.

At the onset of the Nigeria’s 2019 election season, he called me to solicit my opinion on happenings within the Nigerian political scene. At one point, he told me that he was part of a team working on draft documents for a prospective candidate. When the candidate developed cold-feet, he called me and said that he was considering another candidate that had joined the fray. To check out this candidate’s true commitment to the ideals of Nigeria’s restoration, he told me he had sent 20 questions for the candidate to answer. From the answer he would get back, he would tell me if this candidate was the real deal. He was that committed to finding solution to what has been called our peculiar mess.

Pius and I are Pisceans but he had something that I did not have – the gift of eloquence, of diplomacy, of seamlessly mingling with the high and the mighty. As Pisceans, we could adapt to any environment. But somehow, I am allergic to the company of these characters in high places that have tormented us for decades. I could not trust my mouth to behave well in their presence. Pius, on the other hand, had the tact and the patience to deal with them. Overtime, he became one of those who brought me news from that world of our deplorable leaders.

He would usually call late evenings when I was in the library. Once I saw his call, I kuku macarry my bag out of the library for the conversation would last till the closing time. He was ebullient.  He would go from one topic to another and one idea to another. Does he have ideas or what! When he talked to you, he would make you feel that you were the most important person in the world. Any interruption to his conversation with you, he would dismiss. “Imagine, na now I say make I talk to you, na so Ambassador so so so wants to return my call,” he would say with a sigh.

Somehow when it happened last year, I missed the news that he had a car accident in Nigeria. When he called me right from the airport while he was being evacuated, he chided me for not calling the moment it happened. As if I needed proof that it was a major accident, he sent me pictures of his injuries. Talking to him upon his return to Canada, I could tell that the accident had a deep impact on him. It validated the urgency of his life’s work.

I once called him for a phone interview. I was writing a story for an Italian magazine on satire in Africa. I had wanted just a quote from him on the role of political satire in African conversations. In between his travels, he finally gave me a quote. Well, it was not a quote. It was a long essay full of anecdotes.

Payo and I share a lot in common. I was born on 26th February while he was born on the 27th. Our parents were teachers. He believed that there was a way to reach our people through satire. I believe so too. Sometimes, his tweets from Ottawa, Canada, had the same sensibilities as my tweets from Queens, New York. When Pius was declared god of satire, I was happy to be counted as a servant in the vineyard.

Pius made sure that whether Africa is a country or not that Naija no dey carry last. We will honor his contribution to knowledge by keeping that tradition going. We will honor the joy, laughter and smile that he brought to us by continuing to find reasons to laugh in the face of tragedy that is often the African experience.

Although we never met physically in this life, I have faith that in the life to come Pius and I shall meet for organic isi-ewu and nkwobi as part of the distinguished members of the fraternity of polemicists, satirists and interpreters in search of the indigenous dialectics of the African maladies.

We will carry on, for Pius’ sake. Adieu, my friend.

Rudolf Okonkwo is the author of “This American Life Sef.” His latest work is, “The Secret Letters of President Donald J. Trump age 72 1/6.” 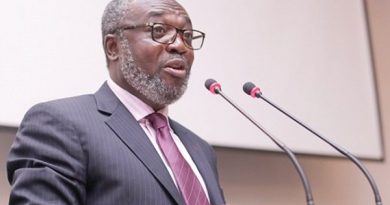 MTN has donated 3000 face masks to the staff of Kumasi South Hospital in the Ashanti regional capital. The donation