Early on Wednesday, February 27, 2019, by 4.40 am and four days after the presidential election held in Nigeria on Saturday, February 23, the Chairman of the ‘Independent’ National Electoral Commission (INEC), Prof Mahmood Yakubu, announced that Muhammadu Buhari of the All Progressives Congress (APC) has been reelected Nigeria’s president. What this means is that, if the legal challenge being undertaken by the presidential candidate of the Peoples Democratic Party (PDP), Atiku Abubakar, comes out unfruitful, the next four years will see Gen Buhari piloting the affairs this country.

President Buhari has already warned Nigerians to expect four years of excruciating hardship. He, reportedly, called it “tough times” which he said would be far worse than what Nigerians experienced in his first term, and I have no reason to doubt him. Obviously, he does not want to once again mesmerize us with tantalizing promises which would only end up advertising his inability to redeem them. He is telling us exactly what to expect so we can brace up for this really tough journey through the wilderness.

I must hasten to congratulate Prof Yakubu and his gaggle of blundering associates at INEC for the award they truly deserve for successfully elevating shoddiness to unimaginable heights and giving it a new, outlandish definition in the history elections in Nigeria. INEC had more than enough time to adequately prepare for the elections, yet about 2. 43 am on February 16, Mr. Yakubu crept out of his hole in Abuja, convoked a press conference, and proclaimed that the presidential and national assembly elections scheduled to hold later that day had been shifted to February 23.

Nobody does this kind of thing in a civilized society. You don’t just wake up one morning and disorganize the lives and programmes of people just because you were asked to organize elections – a job you could have declined if you knew you lacked the ability to even offer an average performance.

Because each time there are general elections in Nigeria, the country is on lockdown, people always plan their lives in advance to fit into that anomaly. Indeed, many had concluded plans to hold diverse events on February 23 like weddings, conferences and so many other things; quite a number of them had secured venues and other logistics and their guests from different parts of the world had even obtained leaves of absence from their various places of work and finished their travel arrangements, but with just one announcement under the cover of darkness, Mr. Yakubu scattered all their plans and transferred the confusion that had engulfed him and his INEC to many lives and organizations across Nigeria. He is lucky that he is operating in a place like Nigeria where people have little or no patience for legal processes, else, the legal actions that would have been instituted against him for the debilitating disorganization he recklessly threw into many lives would have effectively put him, his INEC and their institutionalized incompetence out of business to the relief of everybody.

Did it occur to Mr. Yakubu that by that infamous postponement, he laboured so hard to give fillip to the already growing impression that conducting a free and fair elections was not one of his major priorities? Why, for the sake of all that is good and decent, should it take a grown, educated man just a few hours to an event he started preparing for more than three years ago to suddenly realize he was not fully prepared to perform despite all assurances he had been throwing on the heads of Nigerians? What exactly happened at that moment to cause his sudden change of mind?

Yes, despite all the years Yakubu’s INEC had to prepare for the elections since his appointment on October 21, 2015 and the extra one week he awarded to himself at grave costs to many lives and organizations, the commission still did very little in its execution of the presidential and national assembly elections to demonstrate that it had appreciable grasp of the very strategic assignment it was saddled with. While little or no evidence was shown that INEC had overcome the old problems, it was seen sweating over new, startling ones. Officials and materials still arrived very late at many places after some prospective voters may have got frustrated and left the polling centres. Yakubu had insisted that on no account should anyone be allowed to vote unless the person was subjected to the card-reader identification process, but this was brazenly ignored by his workers with utmost impunity and probably used to facilitate irregularities, including underage voting. The rigging was so ridiculously and unintelligently done that in many cases, the number of votes cast far outnumbered the number of registered voters. And despite these, Yakubu accepted those results and brazenly announced them to the nation and the world.

Voters were targeted by thugs at some areas and prevented from casting their votes because of the assumption that they might vote for candidates of another political party. Even after some people had stood out all day under the sun to cast their votes, some hoodlums arrived, snatched the ballot boxes and either stuffed them with thumb-printed papers or destroyed them. What were Yakubu’s plans to ensure these did not happen?

Why would it take a whole four days to gather and announce election results which were variously announced at all the polling units where voting took place across the country on Saturday? Yakubu’s INEC seems to derive peculiar animation from opening itself to allegations of having the intention to pervert the process. And by so doing, the INEC chairman and his people significantly eroded the credibility of INEC as an impartial umpire and created huge doubts about the result he announced.

The only wonderful thing about Buhari’s “reelection” is that it immediately removed tension from the polity. People were not afraid any more to return to their normal lives. His usually rambunctious supporters had no reason again to take to the streets to vent their anger on anyone. There were however reports that some of them celebrating his victory in Abuja and a Lagos suburb went into some extremities that claimed a few lives. This also happened in 2015, although, the casualties then were more.

The country should have been celebrating the reelection of a president, but what has been largely reported is the coldness that has descended on many hearts. Why? Perhaps, people are wondering whether the security problems that had plagued the country, like the menace of the Fulani herdsmen, Boko Haram, and the bandits creating nightmares in Zamfara, Katsina and now, Sokoto, would degenerate further due to continued shoddy handling. What of the country’s economy which the Buhari government has shown clearly that it neither fully understands nor has the ability to navigate out of the woods? We now have a seriously fractured and polarized country because the old fault-lines have been unduly emphasized due to what seems the determination of the Buhari regime to elevate nepotism to a state policy. Will the president take sincere measures to unite and heal the country this time around or pursue a programme of vindictiveness against those who had vehemently rejected him at the polls as is widely believed? Will it also take him another six months to appoint a new, but still poorly performing cabinet or will he retain the old, blundering one that Nigerians have become tired of asking him to sack?

Well, despite the widespread mourning, a few people out there are celebrating – that should be expected. But one stark, haunting truth is that both the revelers and mourners probably live in this same country and would continue to shop in the same markets and share in the same prevailing hardship. They are all trapped together in this leaking ship stubbornly heading towards a huge, clearly identified iceberg despite an avalanche of warnings.

I have a word for those Nigerians who are genuinely worried about the fate of the country. They should cheer up. Four years is not forty years. Even the worst nightmare ends before you knew it. So, brace up, give your minds adequate preparation since you have already been warned by the captain of the ship himself that it is going to be a very rough sail. My people have this saying that a war whose commencement date had earlier been announced does not consume even the cripple.

Is it possible to entertain any hope with this thick, palpable bleakness enveloping the landscape? Well, yes! It is my hope that Buhari should at least have one sober, sincere friend who should be able to pause awhile from their ongoing bacchanals and get him to realize that this may, perhaps, be his last opportunity to decide his place in history. He can only seize or squander it.

*Ugochukwu Ejinkeonye is a Nigerian writer and journalist ([email protected])

When students are no longer safe in schools 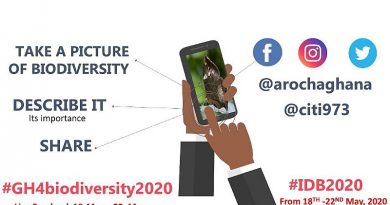 The Ashanti Regional Health Directorate is targeting to vaccinate 440,981 residents in five districts against Yellow Fever as it prepares