LAGOS, March 14 (Reuters) – The boy lay wide-eyed on a bed of outstretched arms. The men who carried him, and others looking on, cheered at the sight of the youngster who seconds earlier had been pulled from the rubble of a four-storey building that collapsed in Lagos, Nigeria.

Nine-year-old Ademola Ayanbola had been in a classroom on the top floor of the building when it collapsed on Wednesday.

One of around 100 pupils who attended the primary school in the Lagos Island district of Nigeria’s commercial capital, he emerged with his face caked in white dust from the rubble and a bloody graze on the side of his head.

“His eyes were open, so we knew he was alive. He wasn’t shouting or crying. He was so calm,” said Temilade Adelaja, the Reuters photographer who captured the moment.

“People were shouting ‘there’s a child’. There were people everywhere, and lots of shouting. Then they brought him out,” she said, describing the moments before his rescue.

The men who surrounded him were a mix of rescue workers, residents and what locals refer to as “area boys” – youths who roam parts of Lagos in gangs. They were outside the collapsed building for hours under the tropical sun: searching, talking and sometimes arguing.

The boy’s father, Francis Ayanbola, had feared he would never see his son alive again when he heard the building had collapsed. First, he went to the site, he said.

“When I got there everything was flat. I was just crying. I was expecting the death of my son,” he said.

Next, he said he visited two hospitals and saw six dead children.

“I couldn’t even look at their faces because I was feeling so bad,” he said of the four boys and two girls he saw, none of whom he recognised.

A friend eventually called Ayanbola to tell him his child was being treated at a hospital.

“When I finally held my son I was so excited, I was so happy. It wasn’t my son’s dead body that I would have to carry,” said Ayanbola, 32, who has two children and sells hair products for a living.

Ayanbola said his son had swelling on different parts of his head and around his eyes, but he had been able to talk.

“He told me that inside their class stones started falling down (from the ceiling). People were saying ‘God, what is happening?’,” he said, recounting his son’s description of the moments before the building collapsed.

Ayanbola said his son, who wants to be a doctor when he grows up, was already able to talk from his hospital bed about his beloved Barcelona soccer club and star player Lionel Messi. He said results of a head scan showed the child did not suffer internal bleeding. Nigerian hospitals do not divulge patient information so this could not be confirmed.

Ayanbola said he was grateful that his son was alive, but angry that others had lost their children.

Authorities have not yet been able to give a final death toll from the disaster. Numbers given on Wednesday ranged from one to eight dead and between 37 and around 50 recovered alive. But on Thursday a spokesman for the national emergency agency said some of those presumed dead had been revived and the figures were in flux. 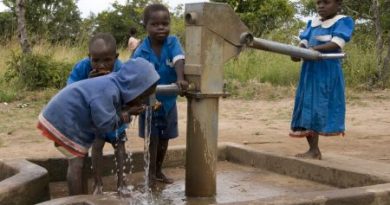