From World war to Civil war, to Trade war and to Climatic war; the effects of the free market economy have since been greatly felt and remains unending unless challenged, and for what we can tell, they have been disastrous.

Over the years, many of the imperialist nations have treated scientific warnings with levity. The concerns of the Annex 1 countries have been more of theoretical analysis than an efficient address to the lingering climatic crisis. In the recent decades, the effects have been very disastrous against humanity and nature, this has however caused a haste revisiting to the question of having a sustainable development and of course a sustainable climate; the damage incurred from natural disasters of the Storms surges, Tsunamis, flooding, diseases and other weather related problems, have mounted pressures on the world stakeholders and have driven a more aggressive discussion about addressing climate change.

The 2018 report of the Intergovernmental Panel on Climate Change (IPCC) has confirmed the average global warming to be at 1°C with an increasing rate of about 0.1°C per year. The global warming is moving by the current rate to an estimate of 1.5°C by the year 2030 and if not addressed, will reach 2°C by 2050 and towards the end of the century- say 2100. At this point, it would be capable of wrecking greatest and unquantifiable disasters that are better imagined than experienced.

Currently, any possible solution such as effecting the Green New Deal proposed to the U.S Congress by the democrats (notably chaired by Senators Alexandria O. Cortex and Ed Markey), is to limit the already unavoidable disaster to an anticipated level as pertaining to the 1.5°C of global warming to be reached by 2030 even in the application of the Green New Deal.

Hypocritically, this sensitive global matter begging for actions has since been reduced to mere debate in the U.S Senate and is even wearing out of discussion. We can tell the free market economic undertones behind this, because the Green New Deal aims at achieving net zero emissions, food, job and health security for all including better workers benefits, overhauling of the transport system, upgrading of household facilities to suit the green energy revolution, compensation for the masses, and safeguarding the future for the future generations. This, as public-oriented as it sounds, appears to challenge the profits of the private investors, not only that it overhauls their current mode of industrialized productions but also that it aims at breaching the gap between the rich and the poor.

Indeed, one cannot be surprised of the negligent gesture of the U.S imperialist President Trump who claimed that there is no climate change, or of the Chinese government that detests admitting to be responsible for climate crisis by their population and emissions from mechanized productions. The duo world powers claim the world benefits from their productions (emissions). But now, the whole world is at risk of looming environmental tragedies.

These gestures are aimed at protecting the profits of private and heavy carbon-dependent producers. Because despite the world powers&#39; hypocritical claims, Germany still possesses considerably clean streets and environments, but pollutes heavily in South Africa where it makes productions.

What is apparent however is that the effects of the climatic problems is greater even in these great power nations. The U.S for instance is threatened by flooding in its coastal regions such as Baltimore, Miami, Carolina and Florida. The &quot;Inside Climate News&quot; revealed that more than 20 days of high-tide flooding, due to rising sea level, occurred in Boston, Atlantic City, Texas etc between May 2017 and April 2018.

Summarily, further rise in global warming beyond 1.5°C is a call for drastic wildfires in our forests, rapid flooding, heat stress, great animal species extinctions in their hundreds of thousands, hunger and poverty particularly in Africa and other parts of the world by the reason of a temperature and drought that would no longer be sustainable for agricultural production.

The greatest contributions to global warming are however from the great power regions; the EU, U.S, Asia, Europe etc. Although African countries contribute less significantly to the global warming, but the devastating effects of climate change do not spare any geographical territory or boundary. It is why South Africa has been at greater risks, and why Lagos has experienced many floodings in recent years due to (1) Increasing anthropogenic activities and (2) The region&#39;s close proximity to the Atlantic ocean and of course, to the effects of rise in sea level.

Basically, the uncontrolled production in free market economy leads to uncontrolled emissions and neglect of climatic warnings. Having to combat this menace is a shift of the discussion to the socialists-advocated world planned economy regulated by the working majority of the world, without this, global challenge of climate change cannot necessarily be solved.

The U.S democrats if serious must mount radical pressures and intensively involve mass education and mobilization to effect the Green New Deal. The young/youth generations across the globe must follow suit for a mass mobilization for a world planned production as against the indiscriminate, excessive production and pollution being done by the world capitalists at the expense of endangered human sustenance and depletion of natural resources.

A 21st century public education must be funded across the globe to meet up with solving the global challenge.

(Gbenga Oloniniran is a graduating student of Geography, and writes from Obafemi Awolowo University,
Ile-Ife Nigeria.)

Alexandria O. Cortex and Ed Markey, February 2018. Recognizing the Duty of the Federal Government to
Create a Green New Deal. Resolution to the U.S Congress 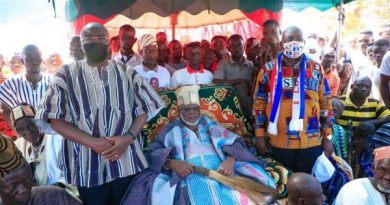