It’s a Saturday, the league games are on for the weekend, then there is a goal in England! Be sure there would be a corresponding loud noise going up in jubilation in faraway Nigeria where millions of fans are glued to their television sets in their homes, viewing centers (which are businesses  that operate to show soccer matches alone for a fee) or they are enjoying the game in local bars, hotels and pubs.

It might be named the English Premier League. But Nigeria has heavy stakes in it!

Nigerian Fans are known to take soccer games to extremes staking very large sums on gambles both online and offline, performing wild jubilations once a favoured team wins a coveted title such that there have been recorded deaths after league wins. There is a great deal of physical and financial commitment to the English Premier League in particular while other leagues across Europe get the views when the major teams are playing.

Severe personal rifts occurs too between fans of opposing clubs and even Nigerian celebrities supporting rival/derby clubs and in fact on some occasions degenerate into the exchange of insults.

What’s so Nigerian about the English Premier League?

Well, one needs to first acknowledge that a lot of Nigerians play in the English Premier league.  Nigeria has been one of the most represented countries in the English Premier League for many years and is presently listed as 14th most represented nation in the EPL on dailystar.co.uk. Notable players such as Jay-Jay Okocha, Joseph Yobo, Yakubu Aiyegbeni, Nwankwo Kanu, Celestine Babayaro and Obafemi Martins have reached a legend like status among their clubs’ fan base.

These men were and some are still the favourite soccer stars of the local Nigerian population with a lot of them usually scouted into European clubs following a tournament where they represented the country very well and were thus noticed. Thus, after good international performance the local players do not return to the local audience but rather relocate the audience’s interest in their new European clubs.

The English Premier League means a lot then for a Nigerian who wants to view his local soccer stars. He knows they are not down the street where the local team is playing and so he glues to the television and watches them.

With this craving comes a cost, he has to pay more for satellite subscription should he desire to access the channels where he can view his favorite foreign-based playing. Satellite television companies operative in Nigeria that manage to meet this demand for EPL with costly subscription plans have the news to tell in their wide profit margins. DSTV, the leading satellite provider in Nigeria maintains channels that are specially tailored towards delivering League games.

According to The World Poverty Clock, 86.9 million Nigerians live in poverty and Nigeria has the largest number of poor people in the world ahead of India. Out of this large populace, a lot of them love to watch soccer. They need a source of income asides this their passion. This is where Betting companies take their swoop on Nigerians. The most popular one of these bet sites in fact has their brand statement as Reward for Passion.

According to Ademola Adebajo the CEO of Stakerden, a leading betting company in Lagos, projects that daily stakes run into billions of Naira. “Currently, we believe daily bets have reached five billion naira ($25 million) cumulatively across all the betting companies. Punters in the country are currently seeing this as a source of daily bread and it is not uncommon to see people appropriating a certain amount for betting daily,”. In a research involving 20 active lovers of soccer and particularly the EPL, only 3 claim they have not placed a bet.

The betting companies require considerably little to establish at 10million naira yearly license but can bring an heavy risk when games run without much upsets and on an occasion a Betmaker Bet9ja had to pay 700million naira over a weekend.

Once the consideration of how much it means in gambling is considered. The next consideration is the number of people employed directly or indirectly in services that run related to the English Premier League. A lot of viewing centers employ operators, offline gambling companies employ several attendants and betslip issuers, bars and hotels where the sport is showed pay their staff from the money made during weekends when major games are played and people come around to view and of course also patronize their drinks and foods. All these are a population well above a million people who are employed directly or indirectly in services related to soccer and the EPL.

The EPL means much again to Nigeria because it is a source of relaxation. Nigerians of course like everyone else need to relief themselves of stress and the EPL is just a great avenue to get the stress off. It is a very strong unifying factor and does replace the recreation services that are unavailable in most housing areas in the country. It’s a social factor that brings people together.

Several Nigerian celebrities are known to support various soccer clubs. The present Presidential aspirant of the opposition party Peoples’ Democratic Party, Atiku Abubakar is a known fan of Arsenal FC for instance while various other clubs have their celebrity fan base in Nigeria.

Various radio and television stations record most viewership at their soccer commentary programmes more than at any other programme and this had done much advantage to broadcasting as radio advertising time that is sold when soccer commentaries are being run generally cost a lot more.

It is certain that somewhere in Nigeria presently, there is an heated argument or passionate talk ongoing somewhere amidst fans of the English soccer league. It means a lot to these fans nothwithstanding that the clubs are faraway and the players are not in sight. Arguments on who is better, which manager should go or stay, which tactics should have been used for which game, which player is better than the other and several other of this nature.

For Nigeria, the English Premier League is not just soccer. It is an adopted son. One we really love!

Koye-Ladele Mofehintoluwa is a student of Obafemi Awolowo University, Ile-Ife, Nigeria. He is a frequent opinion writer with several print and reputable media. He can be contacted on [email protected] or on Twitter @koye_tolu.

The role of traditional rulers – Sanusi the genius: A case study (2) 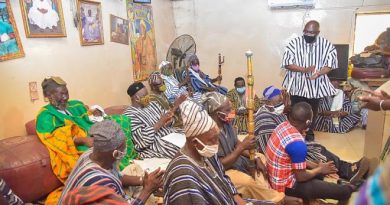