Jordyn Woods’s return to Instagram and her breakfast meeting with Kylie Jenner seems to mark some positive change after all the Tristan Thompson drama. She came back on Friday to celebrate International Women’s Day on her story, but she also celebrated something else very noticeable: a new haircut.

The formerly long-haired model now has a short bob that’s not dissimilar to the same one Mandy Moore showed off on her Instagram Friday. Without mentioning the new look, Woods wrote, “If you’re reading this…it means God has given you another day to wake up and be grateful & better than you were yesterday.”

The caption is very much a comment on where things have been in her life lately as she reportedly attempts to rebuild her relationship with Jenner.

“Their friendship is not 100 percent over,” a source told People Friday, of where things are with Woods and her former best friend. The source went on: “Although she doesn’t live at Kylie’s, Jordyn still has things there. She and Kylie aren’t socializing, but are in contact. They are texting each other.”

So far, neither her nor Jenner’s social media hold any photographic evidence of a renewed relationship, but that doesn’t mean that’s not coming.

Jenner’s family has reportedly decided to let her figure this one out for herself, per People. But, come on, we are talking about the Kardashians. They’re never far from a family conflict or a group chat.

For now, though, Woods remains fairly cryptic in her posts and her new-haircut selfies. 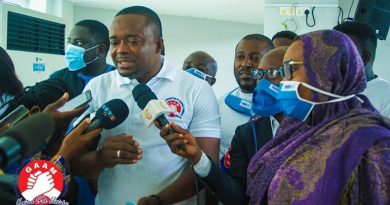 The battle lines have been drawn in Dome-Kwabenya constituency elections of the Greater Accra region between the incumbent Hon. Sarah