* Agrees to sell stake in Botswana venture for $300 mln

MTN, whose shares surged more than 7 percent on the announcement, is reviewing its operations in some markets and its investments in e-commerce platforms, as part of a plan to focus on high-growth markets in the Middle East and Africa.

As part of the review, the South African company has agreed to sell its minority stake in Botswana’s Mascom for $300 million. It sold its sole European unit in Cyprus last year.

MTN said its investments in tower companies and e-commerce platforms, such as African online retailer Jumia, were valued at 40 billion rand and would be sold as they were not long-term strategic assets.

“The group has committed to the portfolio review realising more than 15 billion rand over the next three years, excluding any proceeds from its 23 billion rand position in IHS,” the company said. IHS is a builder of cell phone towers.

Founded with government help after the end of apartheid in 1994, MTN has been one of South Africa’s biggest corporate success stories, but clashes with regulators have distracted management and crimped growth.

Chief Executive Rob Shuter, appointed in 2017 from Vodafone , has drawn up a growth plan that includes branching out to music streaming and mobile financial services.

In 2018, the company reported an 85 percent surge in headline EPS to 337 cents, underscoring the Shuter’s turnaround efforts from a devastating fine in Nigeria.

Headline EPS is the main profit measure in South Africa that strips out certain one-off items.

The bottom line is still not even half the level MTN reported in 2015, the year before it agreed to pay a $1.7 billion fine in Nigeria for missing a deadline to cut off unregistered SIM card users.

The fine was reduced from more than $5 billion after MTN made concessions, including a promise to list its Nigeria unit.

The flotation of MTN Nigeria, which accounts for a third of MTN’s revenues, is likely to take place by the end of June this year, the company said.

MTN has also faced run-ins with authorities in other countries, including Uganda, where four senior executives were deported in recent weeks on accusations of compromising national security. 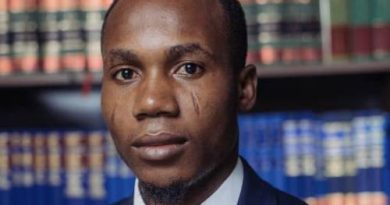 The Demonization Of African Culture: Why Should An African Explain His Identity On Home Soil? By Sunday Adebayo Esq.

Rotimi Ameachi might the candidate Buhari talked about the other time.

A Vice President succeeding an outgoing President in a democratic setting without "an act of God" is something we are yet to witness. ... See MoreSee Less

Be best protectors of our lands – Akufo-Addo to Ghanaians