* Majors have been selling cargoes via one-off tenders on the back of strong demand to secure the highest level.

* Chevron awarded its sell tender for a cargo of Cabinda loading April 7-8 to Unipec. Eni recently sold its Sangos via tender to Unipec as well.

* BP was offering a cargoes of Angolan Kissanje and Pazflor at dated Brent plus $1.30 a barrel, a trader said.

* Indonesia’s Pertamina closed a buy tender for early May crude, results were expected later this week.

* Offers for Bonny Light and Forcados for April loading were shown at dated Brent plus $2.50 a barrel and higher, traders said.

* Libya’s NOC lifted force majeure on the key El Sharara oilfield that had been in place since December and production was at 80,000 barrels per day as of Tuesday morning.

‘He’s Not My Cousin; He’s Not My Uncle’ — Amina Zakari Speaks On Relationship With Buhari

Another building collapses in Magodo, kills one 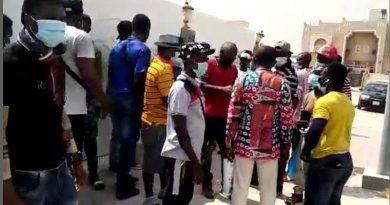 Vice President Dr Mahamudu Bawumia, on Wednesday reiterated government’s commitment to build a 100-bed capacity in the Binduri District of