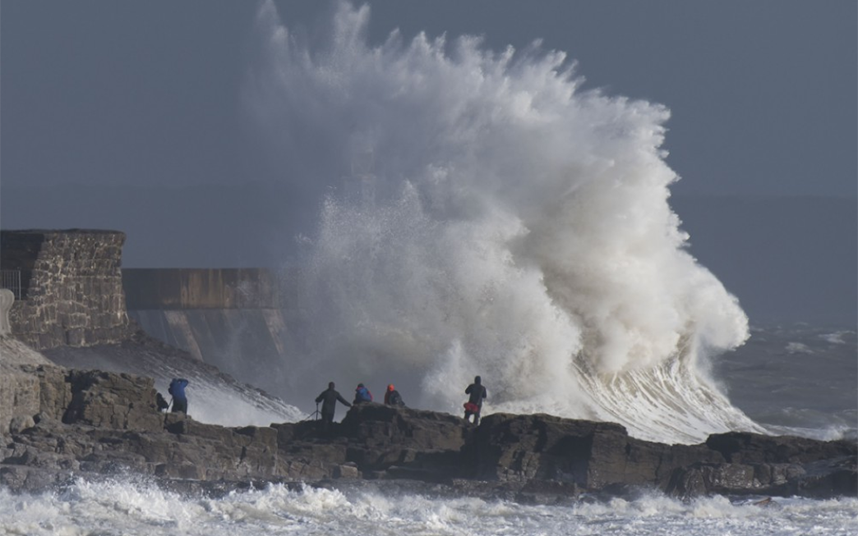 A yellow warning for wind was put in place until 6am on Monday as gusts of up to nearly 80mph whipped a large swathe of the country, with downed trees and debris causing power cuts and affecting travel.

The Met Office had also issued a yellow warning for snow until 2am as heavy falls hit high routes across the Pennines, stranding motorists on the A595 in Cumbria.

At Spadeadam, near the Northumbria border, 2.4 inches of snow was recorded on Sunday night, while Cumbria Police said hazardous conditions were being reported across the county and urged motorists not to travel unless necessary.

One motorist said there was “chaos” on the A595, tweeting: “Shocked at how bad it is! Major problems in Cumbria due to the snow! Very severe.”

High winds, which reached 76mph at Mumbles Head on Swansea Bay, caused disruption on the rail network across Wales and the Midlands.

Meanwhile, police forces across England and Wales reported gales had brought down trees and blown branches into roads, blocking some routes for motorists.

High winds caused the M4 to close in both directions between junctions 41 and 42, Traffic Wales said.

The stormy conditions were expected to have eased by rush hour on Monday morning, although some rain and gusty winds and some snow will continue.

More than a dozen flood alerts are in place across the south-west, as well as two flood warnings, ahead of a fresh band of rain.

Met Office forecaster Emma Smith said: “By six o’clock on Monday the centre of Storm Freya will be out over the North Sea.

“There will still be outbreaks of rain, sleet and snow just clipping the coast by Newcastle and southern Scotland.

“Thereafter into Monday there will be plenty of sunshine around, then we will get a band of showery rain moving in from the south-west.

“That’s going to be moving across Devon and Cornwall first and moving into Wales and Northern Ireland through the morning.

“By the afternoon it will be into the Midlands and towards London with some hail and thunder. Northern and eastern areas will stay sunniest and it will be quite blustery as well, with some gale-force gusts in the west.”

In Devon a gust of 55mph was measured in Chivenor, while 52mph was recorded on the Isle of Portland in Dorset.

Three men had to be rescued from the sea off Studland Bay, also in Dorset, after they got into difficulty in a dinghy.

The trio were left “cold and wet but uninjured” after they managed to clamber onto a yacht that was at anchor, according to the Maritime and Coastguard Agency.

Heavy rain has already hit Scotland on Sunday, with 34mm falling in Kinlochewe in the northwest Highlands.

In Shapp, Cumbria 22mm of rain was recorded and 18mm fell in Mona, which is on the island of Anglesey in Wales.

The A465 was closed on Sunday between Glynneath and Rhigos due to flooding, according to Traffic Wales.

A separate severe warning for snow, which ran until 2am on Monday, had been issued for parts of northern England and southern Scotland.

Meteorologist Greg Dewhurst said a “mixture of sleet and snow” was likely to fall on ground at an altitude of more than 200m.

A very big thank you to our father, the great Ray Royal for your help to our people in this difficult times.
Your kindness to Uromi and Esan land is legendary.
I am proud to say that I am a direct beneficiary of your kindness in the past given to me without any conditions.
God bless you today Sir and always.
Amen. ... See MoreSee Less

I benefited from him too, during my final year in AAU

CULTURE: Bless the land, and the land will bless you