There are only two people in Lagos- the poor and the rich.

We urge the Igbos not to be intimidated as they pay taxes like everyone. They should also not behave like Tinubu and return the hatred by directing it towards the Yoruba working people.

The homophobia that Tinubu is imposing in Lagos is aimed at two things. To continue to stick to state power, employing divide and rule. And also to keep stealing people’s land and wealth by openly sowing seeds of discord and keep us all divided. The same Tinubu, when they wanted to steal the Egun people’s lands at the riverine, they started the famous wicked rant -” Talo m’Egun wa!” Whereas, the Egun people are traditional Lagosians.

Sadly, the PDP is a bad example. Its Vice Presidential candidate, Peter Obi also deported some Igbos from Onitsha on the ground that they are not Anambrarians. We in AAC will remain non-ethnic nor nepotistic. We will stick with our class that is the majority; the millions of the working people of Nigeria in all the streets and estates.

We urge Lagosians not to be scared away from voting like the last time. We should unite behind the poverty and hardships that unite us all, not any ethnic nor nationality. The economy binds us all together. Let us come together come March 9 and vote Tinubu and his cronies out, and vote in Seun Ajireloja of the AAC and all our pro-people candidates contesting for the House of Assembly seats.

Lagos belong to Lagosians, not to Tinubu and his cronies.

A people united can never be defeated!

With ETFs, slow and steady wins the race 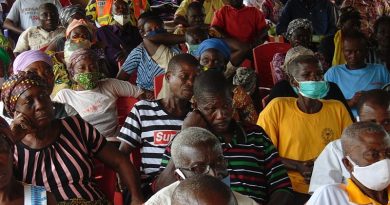 Gonjaland over the weekend marked the 10th anniversary of the reign of the Overlord of Gonja, Yagbonwura Tintumba Boressah in