March 3 (Reuters) – UFC light heavyweight champion Jon Jones cruised to an easy victory over Anthony Smith and Kamaru Usman became the first African-born champion as he defeated Tyrone Woodley for the welterweight title at the T-Mobile Arena in Las Vegas.

Smith lived up to his “Lionheart” nickname, surviving five gruelling five-minute rounds against one of the most dominant fighters of all time, but the judges gave the reigning champion a comprehensive victory at UFC 235.

The 31-year-old New Yorker controlled the fight from start to finish, using a dizzying array of kicks to control the distance and out-wrestling Smith against the fence.

The only risk to Jones came in the closing seconds of the fourth round when he landed an illegal left knee to the head of Smith, who had one hand on the ground.

The challenger would have been awarded a win by disqualification if he told the referee he was unable to continue, but he fought on before ultimately dropping the decision.

“I wanted to win it, I didn’t want to steal it,” Smith said in the cage.

Nigerian-born Kamaru Usman dominated the co-main event, backing Woodley up against the fence and ripping dozens of thunderous shots to the body, and then taking his opponent to the mat at will.

Known for his tactical acumen in the cage, Woodley never had the time or space to use it as Usman swarmed all over him from the opening bell.

Despite Usman’s dominance and a late fourth-round flurry that rocked Woodley badly, the fight was decided on the judges’ scorecards 50-44, 50-44 and 50-45 to crown the first African-born UFC champion.

The much-anticipated UFC debut of former Bellator and ONE FC welterweight champ Ben Askren ended in controversy when referee Herb Dean stopped the fight in the first round, judging Robbie Lawler to have lost consciousness in a bulldog choke.

Lawler, himself a former UFC welterweight champion, immediately protested but to no avail, allowing Askren to maintain his unbeaten MMA record. (Reporting by Philip O’Connor; Editing by Ian Ransom) 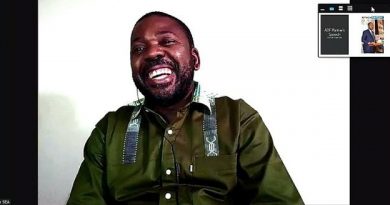