* For production by country, compliance, click on (Adds graphic)

The drop of 300,000 barrels per day (bpd) comes despite criticism from U.S. President Donald Trump, who on Monday tweeted a call for the group to ease its efforts to boost prices, saying they were “getting too high”.

On Jan. 1, the Organization of the Petroleum Exporting Countries and its allies began new production cuts to avert a glut that could soften prices. OPEC sources say the deal will go ahead despite Trump’s pressure.

“We are sticking to the plan,” one OPEC source said when asked about Trump’s tweet.

The 14 OPEC members pumped 30.68 million barrels per day (bpd) in February, the survey showed on Friday, the lowest OPEC total since 2015, according to Reuters surveys. January’s total of 30.98 million bpd was not revised.

Oil has risen to $66 a barrel after a dip below $50 in December, boosted by lower Saudi output, involuntary curbs in other OPEC countries and the prospect of lower supply from Venezuela after Trump imposed sanctions on its oil industry.

OPEC, Russia and other non-members — an alliance known as OPEC+ — agreed to reduce supply by 1.2 million bpd. OPEC’s share is 800,000 bpd, to be delivered by 11 members — all except Iran, Libya and Venezuela, which are exempt from cuts.

In February, the 11 OPEC members bound by the deal achieved 101 percent of pledged cuts, the survey found, up from 70 percent in January. Among exempt producers, Venezuelan supply fell, while Iran managed to boost exports despite also being subject to U.S. sanctions.

The biggest drop in supply came from Saudi Arabia, OPEC’s biggest oil producer, which pumped 130,000 bpd less than in January, the survey showed.

Saudi supply had hit a record 11 million bpd in November, after Trump demanded more be pumped to curb rising prices and make up for losses from Iran. OPEC and the kingdom changed course as prices slid on the prospect of oversupply in 2019.

The second-biggest drop occurred in Venezuela after the U.S. imposed sanctions on state oil firm PDVSA in January, slowing exports. Output in the country, once a top three OPEC producer, has already been in decline for years due to economic collapse.

The survey showed Kuwait and the United Arab Emirates also delivered larger cuts than required under the deal, while Iraq, a laggard on compliance in the last round of cuts, reduced supply with southern and northern exports edging lower.

Production in Libya was little changed as unrest kept the country’s biggest oilfield, El Sharara, offline for a month.

Iran managed a small boost in supply as some customers increased purchases due to waivers from U.S. sanctions, according to tanker data and industry sources.

Nigeria trimmed output but is exceeding its OPEC target due to the start-up of Total’s Egina field. Small African producers Gabon and Congo are also pumping more than agreed levels, the survey found.

Nigeria says the Egina field produces condensate, a type of light oil excluded from the OPEC cuts which only apply to crude.

The Reuters survey included the field based on Total’s listing of it as a crude producer.

The survey aims to track supply to the market and is based on shipping data provided by external sources, Refinitiv Eikon flows data and information provided by sources at oil companies, OPEC and consulting firms. 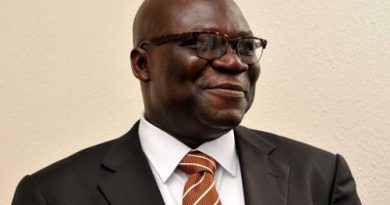 CAN suspends Adamawa Secretary over alleged mismanagement of N1.350m

In the coming days, interest will spring up, young men and women who are ready to align their political ideas with the new normal.

Many have nurtured the dream of LGA boss for a long period, they’ve waited patiently for a day government will return back to the party, I’m glad we’ve it and opportunity for new faces to show their strength.

I look forward working with these guys, they’re great people and I trust their ability to carry out leadership in a digital style.

I’ll support any of them if they deem it fit to run. ... See MoreSee Less

My Leader , i greet you sire

kevin is in apc now kevin okpehblo so remove him

With time we would love to see their CV

I agree with you brother, interesting time ahead.

As beautiful as this piece , you wrongly included some APC Members who diligently delivered their units to APC. So this post doesn't fly. Have you heard anything about anti party activities?

Engr Kelvin Okpebholo is out.

Great. I will personally prefer Thaddeus Irabor. He stood his ground in PDP against all odds. I don't know about the rest except the boss that surprised everyone few days to election 😁.

Thanks so much bros

What are criteria for these choice pls??

Uromi PDP has so many qualified sons and daughters... Let's keep our fingers crossed

Hon Chris,@Okosun Chris should b number one on that list,She represents d goodwill of ENE.

My brother, please replace my name and picture with this picture... Hon. Okosun Chris is a man I believed.. Abeg you grant my wish.

Engr Kelvin Okpebholo ur view in politics will take u to places.In due time I will lay emphasis on it.

@iyere Omonkhegbele I think Hon Joseph Ugege should be among this group of fearless party faithful. He is a dogged fighter and a committed and loyal PDP faithful. He would easily be an easy sell for the party if chosen

I respect your view , but l must let you know that majority has actually work hard for the party, when the times for such comes, the leaders of the party will surely know who will chair the local government, don’t forget some persons also came to the party with the governor, stability is what is actually needed first not just a wish or putting some persons at the front, every body that fight hard for this government deserve to be a chairman, one must lead. Time will tell for all this.

Some of the faces displayed here are not to be trusted when it comes to somthing like this? Some have been tested with little position before now and they messed up,Only waiting to seat upon anything called money that passes through their corridor. On this note the people opinion needs to be considered when the time comes.

IT'S SO DISAPPOINTING TO SEE AFTER A HARD WON VICTORY IN THIS ELECTION, AND DEFEATING THE FORCES OF OPPRESSION, WE'RE QUICK TO START PLANNING AND SCHEMING FOR POLITICAL ASPIRATIONS, IT'S GOOD BUT ONLY AT THE RIGHT TIME, LET'S SAVOUR THIS VICTORY AND TIME LEAD THE WAY FORWARD, I SUSPECT MOST OF YOUR SUPPORTS WHERE FOR PERSONAL GAINS, IF YOU BELIEVE IN A STRUGGLE IT'S NOT ABOUT YOU, BUT THE SURVIVAL OF YOUR BELIEVE, PLEASE LET'S STOP DANCING TO THE BEAT OF THE ENEMIES.

If you have 🤑 Blockchain wallet, Coin ph wallet, Zebpay wallet, Bitcoin wallet, Luno wallet, Coinbase wallet, or Local Bitcoin wallet. you can earn up to👉 $8,000 with your phone or computer. it free to join this group click on the link to start earn money here 👇👇👇🏽👇👇🏽👇🏻 t.me/joinchat/AAAAAEz_AMSczW_RlJpJqQ t.me/joinchat/AAAAAEz_AMSczW_RlJpJqQ 👆👆👆👆👆👆 If you don't have telegram go and download it from play store and start making money from binary options trading

Click on the link and Join for more information

You are mumu man

Una sure say nor be dead body dey reason here so

He will have Obaseki to contend with. #Obaseki2023

Thunder from Libya consume you and your family

This man dick is dead

Festus Farob, I hail oo.. I was told the election results are not out! Please confirm

What does this add to us

Y will he b distracted...when he has ruined IZE IYAMU politically with dat last minute video That gets everyone shouting EDO NOR BE LAGOS...🤣 RUBBISH

Festus, you're a great individual yourself. Don't countenance the jeers. It's a prelude to victory. You fought cleanly for APC just like Success Oyeonoye did for PDP. Conviction is its own reward. Kudos to you. It's not over until it's over.

DISTRACTION! BY DISTRACTORS! Being Ojietebhonlen of Uromi would have helped Tinubu better than being jagaban of Borgu. What is the meaning of jagaban?

Congratulations to the wife alone. Tinubu must hear word from Edo people

Edo has destroyed him, ondo is his perry

The teacher and his pupil

Osho is not even a student yet, he is still a pupil

AfCFTA must be backed by adequate policie — Lawan

Central banking beyond the normal

Man United have tough decisions ahead as reserves fail to impress