In the end, we will remember not the word of our enemies, but the silence of our friends.

Firstly, I would like to congratulate Buhari on his way back to Aso Rock Villa. It is such a worthy thing to talk about. Nevertheless, the hiccups and the abnormalities that followed the elections must as well be considered.

Whether or not we like it, the three ‘Kardashians’ (Kano, Katsina, Kaduna) gave Buhari another four years to rule this country. These three ‘Kardashians’ have been the base where people cast their votes the most. Aside the North, the total votes cast in other regions show the level of apathy in these regions.

Many were complaining of disenfranchisement, intimidation and other related issues that marred the just concluded general elections. Even as at that, one would wonder for instance, in Lagos State, five million people collected PVCs, while those who voted were not up to one million. How does one explain such apathy among people who want good governance? What a 21st century joke! What a fatuous sardony!

The moment I saw this political apathy that characterised both the easterners and those in the south, I began to wonder if they knew the implications of what they had done to themselves. This I-don’t-care attitude is, and has always been the problem of an average Yoruba man and an Igbo man. It is not about Buhari anymore. It is about the difference between those in the north and other regions.

An average northerner prefers to suffer and at the same time show his loyalty to his or her fellow Northerner. What more could that be other than the true definition of patriotism. That is missing in other regions. Upon their state of living and other terrible things they’ve witnessed in the past, they still went out to vote en masse for their choice of candidates. But the reason why those in other regions could not go out en masse to vote after they had collected their PVCs still remains a thing of concern to me. Yet, these are people who claim to have solutions to the problems bedevilling the Nigerian state. But to make things happen, they are always invisible, forgetting the fact that no one can run away from his or her shadows. Even before the commencement of the elections, our hope of having a good leader had been tied around two northerners.

It is only in this part of the world you see a sane person claiming not to ever have anything to do with politics, be it local or international. One would wonder if he or she is affected by the state policies or not? People in this category are those who can barely afford three-square meals a day. So where does the hope lie if I may ask?

In the south, we always see ourselves as the most intelligent set of people in Nigeria. We believe we have remedies to the malady of this country. We believe we can change things by ranting online through the use of big grammars. The easterners as well believe they are the reason why this country is still in existence. They want to secede but can’t face their leaders who have been the bane of their progress all this while. We abuse the northerners for everything we claim to have, but they keep ruling us. I must say with all honesty and modesty that I am happy that Buhari won the just concluded general election. The reason is because we will learn our lessons. Next time, we will vote based on merit, and not Baba So’pe.

Both Atiku and Buhari were never an option for me. But we keep allowing this set of analogue thinking dudes (as we called them) to continue presiding over the affairs of this country. The lack of truthfulness, unwholesomeness, impiousness, dubiousness, and other ungodly acts that have characterised both the Igbo and the Yoruba, is the main reason these people will continue to rule us till thy kingdom come. If we are to go back to history as it would interest my readers that the northerners have ruled this country for over 30 years, to what extent did that enhance the welfare of the ‘Aminukanosalakawas’, not to talk of the Ndigbo as well as the Oduduwa? When Obasanjo was the President of the Federal Republic of Nigeria, to what extent did that enhance the welfare of the hoi polloi in the Oduduwa Republic? So what are we talking about?

The truth of the matter is that Nigeria can never work as a nation. Nigeria never existed in the first place. The amalgamation of 1914 was nothing but a pure scam. The independence we got in 1960 was nothing but a pure scam. Those in the state houses of power know most of these things; many wrong things at the right time; many right things at the wrong time. This is why there is need for restructuring, or we go our separate ways. Otherwise, Nigeria can, and will never work as a nation. My fellow Nigerians, that’s the bitter truth.

I am not being vulgar as some of my readers would think, as I am also in the system but this should be seen as didactic as possible. It is a call to sober reflection. Time to wake up is now! 50 years after independence, wetin we gain? All na story! Let’s make Nigeria great by taking the necessary decisions, not the palliative ones we’ve been taking.

Egbeolowo Ridwan Olaitan, a writer, political scientist, and a student of Rosicrucian Mysticism, sent this through [email protected] 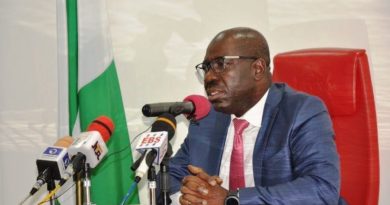 Edo Governorship: Obaseki must come clean on his stewardship – National Accord

President Nana Addo Dankwa Akufo-Addo has, once again, reaffirmed his administration’s support for any private company which was ready to