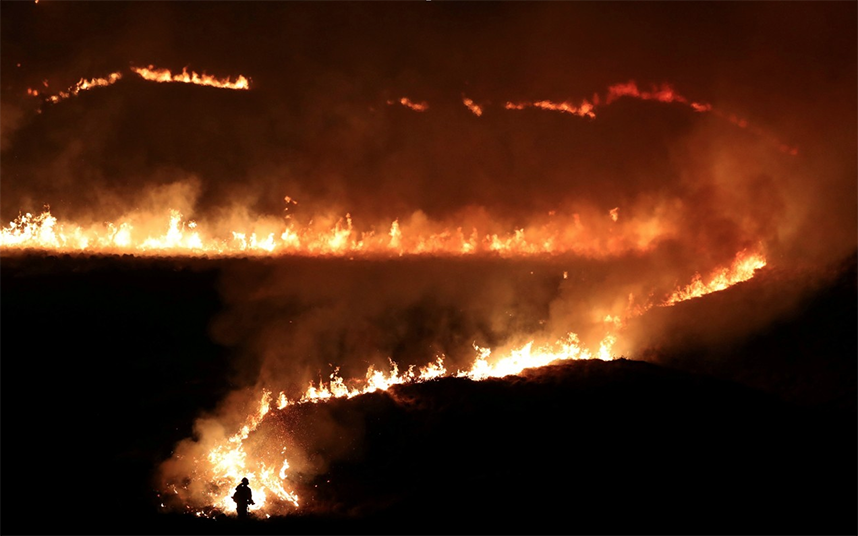 Firefighters have been tackling a large moorland blaze in West Yorkshire.

An area of around 1.5 square kilometres was burning on Saddleworth Moor after Britain saw its hottest winter day on record on Tuesday.

The fire near Marsden could be seen for miles around as crews from West Yorkshire Fire and Rescue Service battled to contain it through the night.

Witnesses described the “terrible” scene of fire coming close to buildings high on the moorland.  One described it as “apocalyptic”.

They included engines from Marsden, Huddersfield and the Kirklees area.

Incident Commander Laura Boocock told the BBC it was “one of the biggest grass fires (she) has ever seen”, but it was “nothing they can’t handle”.

Witness Harry Broughton tweeted: “Never seen anything like this – had a drive up as these things look terrible .. high up on the Pennines between #Saddleworth and #Marsden on the Manc/Yorks border, but close to houses including two pubs. Hope it is contained..”

The fire on Saddleworth came after firefighters had to tackle a large gorse fire on Arthur’s Seat in Edinburgh.

Around 800 square metres of gorse was ablaze on the Salisbury Crags, with the flames visible across the city.

And two large fires started within an hour of each other in the Ashdown Forest in East Sussex earlier.

Britain saw its hottest winter day on record on Tuesday when the mercury hit 21.2C (69.4F) in Kew Gardens, London.

The more they try to pull you down, the higher God will continue to lift you up. ... See MoreSee Less

Saweetie Taps In to Her Mornings With Gratitude, Lemons, and Affirmations