Challenged by main rival, Former Vice President, Atiku Abubakar, incumbent President Muhammadu Buhari had to tango with Seventy One other Candidates which includes the highest proportion of younger aspirants for the most revered Political Position in Nigeria’s Democratic history. With the two major political parties, the ruling All Progressives Congress (APC) and opposition People’s Democratic Party (PDP) boastful of immense support bases from the Northern and Southern parts of the country respectively, victory for either Candidates was predictably wrested in the turnouts and directions of voters from the Middle Belt States of the country.

Behold, the die was cast when the Chairman of Independent National Electoral Commission, Professor Mahmood Yakubu announced about 24hours earlier that voting were to commence by 8:00am on Saturday, 23rd February, 2019.

The early hours of the election day was serene and thick with a lot of anxieties and expectations among Abuja residents and Nigerians at large. It was to be a day we, Nigerian voters would determine who governs us for the next term of Four years. As seen by several million Nigerians, the election could be compared to as a referrandum on the incumbent administration of President Muhammadu Buhari, to either remain or leave.

This election, typically Nigerian, is not without concerns. Having rescheduled the election barely five hours before voting were set to commence, from its initial date of February 16th 2019, to one week later (February 23rd, 2019), the Independent National Electoral Commission gave credence to pessimism among millions of Nigerians. The Head of INEC may have blatantly refused to acknowledge the fact that the Logistics failure of the body is either due to corruption or inefficiency from that department. Should he accept this premise, then, one would beg to ask if extra One Week is enough to cover up for the lapses of over three years of preparations by the Electoral Commission. No doubt, the electorates are bound to smell something fishy thence.

A quick look at the figures shows that out of 84,004,084 registered voters across the country, about 72 million Nigerians collected their Permanent Voters Cards (PVCs), and thus, are eligible to vote. But, the nut-cracking question was, would the 72 million eligible voters exercise their franchise?

Going further, the turn out of voters in this year’s election is remarkably high compared to previous elections in the country. Indeed, it is evident of a renewed sense of Nationalism and the fact that Nigerians are beginning to understand the importance of their votes in determining the Nation’s destiny.

Also noteworthy, is the seemingly non-interferrence  demonstrated by the State throughout the electioneering processes. This, indeed, is a plus to Nigeria’s fledging Democracy. Truth be told, there were several instances where an INEC Officials and ad hoc Staffs alike, had been remanded and are set to be prosecuted for conformity with certain Political parties. This, of course, is a shock reversal from the known hanky panky and hob-nobbings among INEC officials and politicians.

But, aside the many positives, there were as much sad tales. Expectedly, the Nigerian Factor played out throughout the electioneering processes, and the resultant consequences are appalling.

To begin with, Voting did not commenced in over 53% of the polling units across the country as and when due—8:00am. In the city of Abuja where I write from, voting did not begin at LEA Primary School, 3rd Avenue, Gwarinpa until about 12:35 noon. Such delays led to voter apathy in so many parts of the country where voters got tired of waiting, even though, there were extensions of voting time to cover for the loss hours.

In addition, the cases of dysfunctional card readers were too rampant and shameful for the system. Having abolished the use of incident forms, which provided leverage to Card readers’ failure in 2015 election, I had thought that Prof Mahmood’s INEC had found lasting solutions to the clog. Nay, my thoughts and expectations turned out to be futile exercises. Nigerians were once again faced with the embarrassing disenfranchisement caused by Card Reader Failures.

How could an election with a budget of over 250billion naira be faced with such avoidable hitch? Wonder I am to imagine how the last Three and Half years had been spent in preparation for this project!

The frustrations of voters were compounded by pockets of violence unleashed by political thugs in some parts of the country. Inasmuch as I had not expected a hitch-free election (based on past experiences), even though it turned out to be relatively peaceful in several parts of the country; still, the rate of violence and casualties before, on, and after the election day is disheartening.

There were reports of killings in Rivers, Kogi, Kano, Bayelsa, Oyo, Lagos and Delta States of the country. The casualty figures, as estimated by this writer, is not less than Fifty.

Heart broken, young and first time Nigerian Voters (between the ages of 18-20 years) laments bitterly on the paradox of Democracy as a form of Government which has to be sustained with the blood of Citizens in this part of the World.

Looking forward, 2019 General Elections in Nigeria can be adjudged as a gap-bridging exercise in the Nation’s Electoral Processes. However, to achieve near perfection in the future, there is the need for a National Discourse on the subject matter. Starting with, certain clauses in the Electoral Acts need to be revisited. These include but are not limited to; the criteria for fielding political parties, financial discipline among Candidates and their Political Parties, consideration of votes from Nigerians in Diaspora, tougher sanctions on vote buying and rigging among several others. Also, the Independent National Electoral Commission in collaboration with Law Enforcement Agencies should do more in ensuring strict adherence to stipulated regulations. Politicians and the Electorates must be re-conscientized on the essence of playing by the rules. Nigerians should embrace such moves in the spirit of Nationalism.

Meanwhile, now that President Muhammadu Buhari has been re-elected, after polling a total votes of 15,191,847 against his closest rival Atiku Abubakar who had 11,262,978, Nigerians and the World can reflect on this results as a nod for Continuity (for the incumbent administration) by the People. Hence, while congratulating President Muhammadu Buhari on his victory, and the INEC for a Fair and Transparent (but not free election?), I hope that the Electoral body in collaboration with Civil Society Organizations would go back to the drawing board to ensure that the shortcomings of this year’s election are addressed before it is too late.

Instructively, to put an end to the major banes confronting Nigeria’s Electoral system, which of course are votes buying, ballot box snatching, and fuelling of violence, INEC must ensure that perpetrators do not go Scott-free. This should be done by not only targeting and prosecuting the footsoldiers but also their Masters, Sponsors, and Political Parties alike. Inclusive is the dire need for improved Logistics by the Electoral Body in subsequent elections. If Nigeria is not ripe for the use of Card Readers, innovations must be made for more transparent and accommodating mechanisms to checkmate the current scourge of disenfranchisement of her Electorates.

To crown it all, I dream of a Nigeria where Political Office holders are stripped of their portfolios and jailed by the Courts for their involvement in the heinous crimes of vote buying, rigging and sponsored touting during elections. If that be the case, Nigeria’s democracy can be said to have fully attained it’s peak and thus, worthy of emulation as the giant of a Free and Democratic Africa! May the sun rise tomorrow…

_Comrade Muhammed Adoke_ a Writer, Social Commentator, and Activist, is a Media Assistant at Northern Nigeria Initiative For Peace, Unity and Development, Abuja. 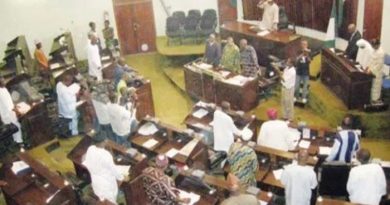