It is my sad duty today to inform you of the political demise of Senator Bukola Abiku Mesujamba Saraki, the Patriarch of Saraki Corruption Dynasty (SCD). Mesujamba Saraki entered his political mortality at 15:20 Nigerian time Saturday, February 23, 2019. The brutal electoral defeat of Mesujamba Saraki, the Kwara native son on Saturday capped one of the longest running fraudulent career of a politician of our time.

His appearance at the Code of Conduct Tribunal (CCT) in the heady days of his false assets  declaration was heralded by a carnival of 50 senators of who’s who in the Senate of Robbers. It was a circus of shame. Except professional mourners, no one is mourning the political death of one of Nigeria’s most detestable and controversial senate presidents.

Mesujamba’s die-hard loyalists, benefactors of his corruption spoils, tribes’ men and women, confused social media bloggers, professional mourners, criers, and of course the 50 thieves from the Senate have all gone crazy, mourning all day and all night, falling over themselves to get all the misery right. “Oh, what an exit!” they cried cried and pleaded “Mesujamba don’t leave us yet, don’t go too soon.” In howling hysterical sorrow, they asked: “Who’s this Mesujamba?” “What kind of God has lived among us?” “How we will ever get by without him?” “He had his moments. He had some style. After all, he’s from the famous SCD.”

Don’t cry for Mesujamba. His political demise has come full circle. He’s gone now. As soon as the smoke of his political funeral clears, we’re all going to see the evil he did for his people over the years. He let his people and nation down. He was supposed to have been invincible like his father the erstwhile patriarch of the SCD. But in the end, he was not. He fell like a lifeless fig tree.

Sing you foolish Nigerians. But you’ve all got it wrong. Enjoy your mourning and cries because your tears will know no end. There are no more tears to shed for your beloved Mesujamba. Your prince is dead – politically. Your king is through. Your king is not coming back to you. For 40 years, his family kept the people of Kwara State in servitude, feeding them with crumbs and dog food. But the star of the corrupt Senate is gone. The glamour has worn thin. I know that’s a pretty bad news for you.

Sing you fools, paid mourners cry your eyes out. He’s not coming back to you! Don’t cry for Mesujamba. Weep for yourselves. The SCD spreads far and wide. He’s deceptively smart – a legacy from his dad. Mesujamba became so powerful, he also became proud. And when his final autopsy  was in, power, greed, pride, arrogance and presumption led to his tragic death. He was stricken with political revenge and died a pauper. He was killed by his own passions and desires. His end proves right the saying that the alternative to discipline is disaster. His life mirrors how a useless life is as good as early death.

Don’t cry for Mesujamba. As a politician, Mesujamba was heartless, cold, calculating, and arrogant. He couldn’t be controlled. You fools mourning and crying for Mesujamba you have been swallowed up by Mesujamba many times. And those who are not have become mad and sick. Mesujamba was dangerous to the sociopolitical and economic health of Kwara and our nation.

Fools don’t cry for Mesujamba. Truth be told, he never loved you. He never served you. He never cared for you. All his life, he lived a wild and mad existence. But he kept his promise of being the prince and the king of corruption. His eyes were larger than his stomach. He broke every political protocol and decency. Stop mourning and stop wailing and stop shaking your heads as if you’re mourning the death of your mother.

Oh you fools, let Mesujamba ride ignominiously to his political sunset. How dare you cry for him? Why are you crying for him? Mesujamba robbed you cold blind of your millions and your livelihood. You all spiraled into poverty. Seemingly, you have not learned your lessons from Mesujamba’s financial slaughter of our banks. He got his fame, power, and pride through your sheepish loyalty. For 40 years the SCD engineered a feverish rampage of our common wealth. He’s been a thorn in your flesh and in our flesh. Those who opposed him are stepped on, cut up, or simply disappear! Oh fools, how can you be so short-sighted and so forgetful?

Fools, you play with the bull and you get the horns! Anyone of you with half a brain should be rejoicing that Mesujamba is no more the Senate President. Under SCD, the Kwara State economy was a wreck. It was buried in gargantuan debt, and suffocated in steep poverty. Well then, Kwara people roll out the drums and dance round the state. Celebrate your liberation and freedom from oppression, poverty, slavery, and bondage. Hold a thanksgiving service and thank your creator that your dark days are over. It’s passover time. Let’s celebrate!

You fools crying for Mesujamba you’re either deaf, dumb, or blind or suffering from an eclectic mix of the three. Oh you peons, stop shedding tears for him. No tears are needed  for his political departure. That’s how and that’s the way Mesujamba should go. For long, he sarcastically mocked our criminal justice system. To be sure, it is the recurring desire of Nigerians to make Mesujamba a classical example of the War on Corruption to purify our body politic of toxic political leaders. But it never happened!

Once upon a time, when wicked King Jehoram of Judah died of divinely inflicted disease no one regretted his passing. He was buried in a place apart from the “royal cemetery” with no mourners or the customary burning of spices in his honor. It was a funeral no one attended. The party is over for Mesujamba. His political end has come. Don’t cry for Mesujamba. Let Mesujamba mourn Mesujamba. Like King Jehoram, no one should attend Mesujamba’s political funeral! 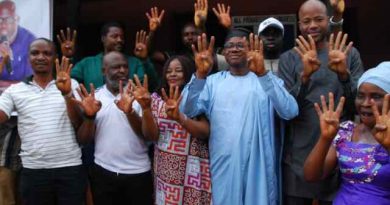 Ashley Yusuf foundation is at the mercy of the poor masses living in a far neighborhood in Sokale L.G.A, Abuja.

Ridge ICU running out of oxygen for covid-19 patients