With the declaration of the Independent National Electoral Commission that the results would be declared in a not too distant future, one can reasonably begin to fear that something is going wrong or is about to. The collation is taking so much time and the toll of violence is rising. In 2015, we already knew who the next President was by Sunday afternoon.

It is not impressive that the elections so far have not reflected free and fair with some areas having experienced blood letting with deaths recorded, massive explosions, electoral disruptions, tribalist threats, burnt ballots and other such irregularities which have marred the ballot with the Senatorial candidate of a registered party even excluded from the ballot paper in Lagos state.

As it is clear now, two options are taking a home run towards the Presidency and they are the incumbent Muhammadu Buhari and his closest rival Atiku Abubakar. Their supporters have insisted that they are both winning in an election where there can be only one winner. Both teams believe strongly that they have the lead and it is certain that whoever loses would be unlikely to accept the results with the conviction with which both teams push the narrative that they are in the lead.

Right from the start of the electioneering, the groundwork of contestable and unacceptable result was laid  with the early morning postponement on February 16, 2019. That postponement already created enough issues for whoever loses to base his faith upon that it was not a free and fair election with the complained low voter turnout yesterday being one of the complains linked to the postponement or the proliferation of sensitive materials which may have been used in polling units where there was disruption.

What we should call into question at this particular time is if Nigeria is Winning. What substantial change does the devil or the deep blue sea represent for the Nigerian state? Is any of the two choices the correct outcome for Nigeria?

What do we see in the next 4 years? Will aged Buhari take us to the Next Level? Will Atiku Get Nigeria Working while also making his friends rich?

What substantial change can occur between 2019 and 2023 if either of the two candidates emerge?

Atiku is Winning, Buhari is Winning. Nigeria may not be winning. 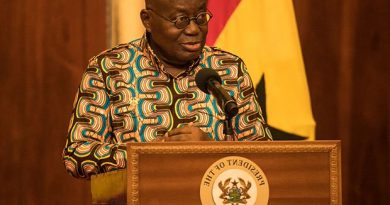 Facebook says it removed 211 accounts in UAE, Nigeria and Egypt

Our duty is to enforce the law, not negotiate with bandits — El-Rufai