Natasha Akpoti, a senatorial candidate for Kogi Central senatorial district contesting on the platform of the Social Democratic Party (SDP), has accused Yahaya Bello, Governor of Kogi State, of preventing her from gaining access into the state ahead of the presidential and National Assembly elections rescheduled for Saturday.

Earlier during the week, she had written a letter to President Muhammadu Buhari, accusing the Governor of planning to assassinate her.

The SDP senatorial candidate stated this in a phone conversation with SaharaReporters on Friday night.

She alleged that she could not go beyond Banda area, just before Lokoja, the capital city of Kogi State, as the security aides of the Governor allegedly led a team of more than 100 policemen, who prevented her from proceeding on her journey.

She said she suspected that the ADC led the roadblock team because he is an officer of higher rank than the policemen in her entourage and it would have been easier for him to order her security officer to stand aside.

Akpoti said she is currently hiding in an undisclosed location.

She said: “The Governor made an illegal roadblock at Bandal by the Naval quarters, just a few minutes from Lokoja. He got over 100 armed men. He got policemen from the government house and state policemen who wore masks. We know the state policemen because they have a newer uniform.

“What they were doing was that they were stopping and searching, but two policemen told me their aim was to arrest me and the plan was that if they had gotten me, they would have disarmed me, taken all my policemen and secretly planted some weapons and ammunitions in my car and then charge me for possession for arms.”

She said immediately she caught whiff of the roadblock, she stopped at Abaji and called the Commissioner of Police.

However, spokesperson of the Kogi State Police Command, told SaharaReporters there was no such road block. 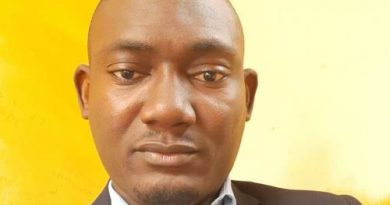 Keyamo vs Lawmakers: Thanks But No Thanks By Ade-Adedeji Adeyera

The National Peace Council says it will not be the mouthpiece of any political party in the country. It comes