* People struggle to afford to travel again to vote Feb. 23

By Abraham Achirga and Paul Carsten

YOLA, Nigeria/ABUJA, Feb 22 (Reuters) – Nigerian teacher Benjamin Shagu flew 500 km (310 miles) from the east of the country to the capital, Abuja, to vote in the presidential election – only for the vote to be delayed for a week, just five hours before polls had been due to open.

“I have left my students for a week. I can’t leave them for another week,” said the English teacher – who travelled from the eastern city of Yola – weighing up the expense and disruption in returning to the city in which he registered to vote.

Many of the country’s 72.8 million eligible voters, having spent considerable sums of money on travel, face the same dilemma.

The delay to the election, now scheduled for Saturday, could depress turnout, according to politicians and civil society groups. That in turn would reduce the mandate of the eventual winner to rule Africa’s most populous country and its biggest economy.

The two main candidates – President Muhammadu Buhari and former Vice President Atiku Abubakar – are also both over 70 years old and have failed to generate significant excitement from a relatively youthful population.

“It disadvantages us because we need the turnout. Our base is the youth population, and they’re the ones who can just easily get turned off from the whole process,” Bukola Saraki, director general of Atiku’s campaign, told Reuters in an interview.

“The momentum was on our side,” he said.

His supporters had been galvanised in the last two elections with a high turnout in his core base in the northwest, she said, the region with the highest number of registered voters.

The main opposition People’s Democratic Party (PDP) typically attracts more support in the southeast, a region where turnout has historically been low, she said.

Yusuf Tuggar, a campaign team member of the ruling All Progressives Congress, said his party would be hit harder because many of its northern supporters live in the south and could not afford to travel home.

“It hurts us more because we have more supporters,” he said.

Turnout in presidential elections has declined steadily since 2003 from nearly 70 percent to just 44 percent in 2015.

That is largely because of growing disenchantment with a political class seen as corrupt and out of touch with a population that includes a high proportion of people living in extreme poverty.

Hassan said that, irrespective of the outcome, lower voter numbers would be dangerous for the winner.

“Sooner or later many people will question the legitimacy of elected representatives, especially when they have not participated in the process,” said Hassan.

Such concerns have led to the announcement of measures aimed at boosting turnout.

The interior ministry said Friday would be a public holiday, to give people time to travel to the polls, while fuel suppliers cut the price of petrol and a trade union that operates bus routes nationwide agreed to provide discounts for trips to voting points.

The hope was that people would overcome the difficulties involved in making a second trek to the polls.

“I need to travel to perform my citizenship of Nigeria,” said student Francisca Esidoy as she boarded a bus in the northern city of Kano, where she lives, to make the 970 kilometre (600 miles) journey to her southeastern home state of Abia.

But others could not be enticed.

Brauna Afraimu, 41, a civil servant based in Yola, said he was too disillusioned to make the 440 kilometre journey to nearby Bauchi state. “All these things will not motivate me to go and vote. I’ve already spent a lot of my resources and time last week,” he said. (Additional reporting by Aaron Ross and Alexis Akwagyiram in Abuja, Percy Dabang in Yola, Kazeem Sanni in Kano; Writing by Alexis Akwagyiram; Editing by James Macharia and Hugh Lawson) 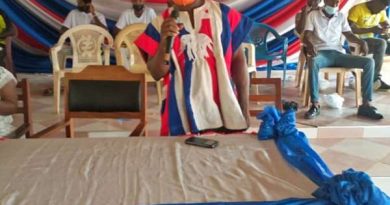