Desmond Elliot, popular Nollywood actor and the lawmaker representing Surulere I Constituency in the Lagos State House of Assembly, has taken to social media to defend his commissioning of a toilet.

The biofil toilet was sponsored by the Australian government and donated by Honourable Ladi Lawanson, Commissioner for Transport, Lagos State.

A post celebrating the inauguration of the toilet on Instagram read: “Sincere thanks and gratitude goes to Hon Com Ladi Lawson for making this Biofil toilet a reality. The Autralian government for sponsoring the project. Bar Iraboh for making it happen. Entire Gbaja community, especially the CDA chairman, Alh Seriki for the land and being an example to us all. The entire surulere. #moretocome.”

However, it appears that more than 24 hours after the toilet was commissioned on Wednesday, Elliot is still defending the project, as many Nigerians have taken to social media to express disappointment with the achievement.

To @mekeymore who wrote: “You are all fools. Public toilet? Is that the best you can do? God will punish you all”, Elliot responded: “I’m sure you’re speaking for yourself. God read about biofil toilet. Ignorant Nigerian.”

Another user, @babademoo wrote: “Where exactly are the pictures of the biofil toilet you have gathered to commission here? #Bunchofdeceitfulpeople,” and the lawmaker responded: “if you can’t believe it’s biofil, why then do you believe it’s a toilet. Shiooo.”

According to www.biofilcom.net, “The BiofilTM Standalone is an all-in-one unit that offers an onsite water closet and digester. With the option of a micro flush seat, the user simply presses a foot peddle to release the waste into a digester housed directly beneath the seat. The unit utilizes the water from each handwashing (as little as 500mL) to flush the toilet for the next user. This unit is ideal for areas with no access to water, this includes construction sites, resettlement communities and low income communities with no access to water. The BiofilTM Standalone consists of a super-structure, a microflush seat, a handwash basin and digester.”

However, some Nigerians on social media have also been quick to come to his defence, insisting he has been involved in other projects. 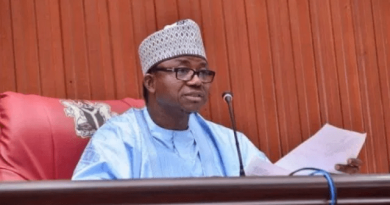 IBEDC begins distribution of free meters to 10,000 households in Osun

My Dear Esan Brothers and Sisters,

Let me start by saying I am a Benin Man and I am a great believer of empowering our youth so they stand on their feet and don't need to scream "Up Chair Up Chair" for any politician or Leader to survive.

News has it that Chief Mike Onolemhemhen was in the United State of America few weeks ago and he addressed an Esan Association in USA.

That Association to me is liken to Edo National Association Worldwide (ENAW) and they hold an Annual of Biannual Event.

The organisers of this event do send Invitations to Edos based in Nigeria to attend this August event and it has created an empowering opportunity for several people. America Visa in any passport is worth more than gold.

Now, I want to ask, did Chief Mike Onolemhemhen facilitated Visa for any Esan youth to accompany him to this August event in USA or he went alone?

I sincerely love Minister Mike but we need to start asking the right questions. When he was Minister, I can attest to the fact that he did very well so I will support a Man like Mike for greater and higher responsibility.

Let's imagine if he went with 5 Youths from your fold, can you imagine the economic benefits that means to many other Esan Youths?

See, take 20k, 50k 100k can not help nay youth in this country anymore....you will always be looking for who to give you.

I know some elements will come out to attack me because to them, I am asking difficult questions but my hope is that this gets to Minister Mike and when next this opportunity comes up, even if na one Esan youth him fit help, I am satisfied.

Please let's ponder on this.
Note: I love Mr. Mike and I will stand tall for him any Day and any time. ... See MoreSee Less

If every body travel out of the state, who will vote Esan Agenda?

Enabulele, please get your facts right, Mike did not organise any event in America, people there used the opportunity of being around to organize a meet up with him on the state and development of Esan land. When the video comes out, you will understand better.

This post is misleading please go get your facts. Mike Onolomenmen is not the organizer of that meeting just as Peter Oghina has said, and again, Mike Onolomenmen helped a lot his people from Uromi and some are grateful while some become ungrateful to him but the truth is, chief mike Onolomenmen is the highest human development builder as long as Uromi is concerned.

It's not something, you people have to let bother us or the entire UROMI youth. It's the same distractor that is at play. The guilty ara afraid what is trying to say how many people has Mike help? For you to know he is a very mopic minded person, empowering somebody by giving visa to US, that is to tell us how little he his in thinking. Must he carry microphone to announce he has help this or that. The truth of the matter is they hate what they don't know..keep raising Brother.

I think he went on a private visit but seized the opportunity to address them or they saw the opportunity to meet him. All the same, I like your reason. It is good thinking and advocacy which all our privileged one must take seriously.

A/R: Just as we did to Mahama in 2016, We’ll kick out NPP over unpaid legacy arrears — Aggrieved teachers

Are Trump’s followers being conned? No — they gave him $100 million because they love him