The Presidency has denied multiple claims that Vice President Yemi Osinbajo resigned on Wednesday in protest of repeated sidelining from major activities in the government of President Muhammadu Buhari.

It had been claimed that Osinbajo resigned on Wednesday and that it toook the intervention of Bola Tinubu, National Leader of the All progressives Congress (APC), for the Vice President to rescind his decision.

Osinbajo is known to be unhappy with attempts by Buhari’s most powerful allies to undermine him in this government, and it was said things reached the tipping point for him when he was excluded from the President’s crucial meeting with security chiefs on Wednesday — just three days before the rescheduled presidential and national assembly elections.

However, when SaharaReporters contacted Laolu Akande, Senior Special Assistant to the Vice President on Media and Publicty, he denied it emphatically.

“Complete fabrication; it never happened,” he exclaimed. “The VP was in Lagos and Yola yesterday. There was no such thing; absolutely no such thing.”

Akande said there was no way Osinbajo would have resigned over the non-invitation to Wednesday’s security meeting, as he couldn’t be part of it all the time.

“The VP has met with security chiefs many times, including this week,” Akande added. “The VP dooes not have to attend every security meeting. I spoke with him and I can confirm it is not true. This is evil and a fabrication to cause confusion.”

The Vice President himself denied it while addressing a forum on Thursday morning, saying: “There are deliberate propaganda. Today, they’ve been spreading some information around that I’ve resigned. They said I’ve resigned; they said I didn’t attend the security meeting yesterday.

“I was in my office… What time do I have? Must I attend every meeting? Can’t the President hold a meeting with security chiefs without me? They said I was so angry that they didn’t bring me to that security meeting — I was excluded — so I resigned.” 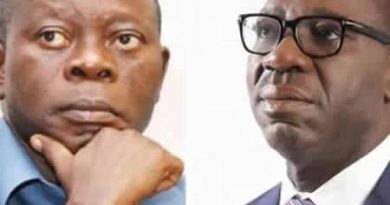 NAHCON: Joining the Fight Against COVID-19

By this time on Sunday, I will see what you will be posting. I here say ur ogar dey Abuja for DSS facility, I beg is it true?

There is one thing that irritate me from the contributors of Uromi voice. They never come out with constructive argument, rather they will abusing and insulting people any how.

They are our heroes for sticking with truth

They are The Gurus AND Pioneers among ESAN SONS and DAUGHTERS. WE are very Proud of THEM

Just be truthful for once

Who are you if I may ask?

People repost hearsay and rumors. Until an information has been confirmed it is sensible to desist from posting it so as not look shallow, petty, ignorant and stupid.

Do you think the esan are fools?

OBASEKI AND SHAIBU VANGUARD UK SOLIDLY HAPPY WITH THIS STRUCTURE ON GROUND.

This is wre they are deceiving the public

If not be Godwin me I nor go vote

Edo my state is a pace setter. Edo people are doing well. National will learn from Edo

God bless you my great owanlen

The former sub-chief of Foase Charles Manu is said to have stolen GH¢20,000.00, from a teacher, who wanted to buy

Okada Business Will Keep Booming If Roads Are Not Expanded – Researcher