Eunice Atuejide, presidential candidate of the National Interest Party (NIP), has withdrawn from the race for Nigeria’s number one seat.

A statement by Atuejide, who also doubles as the National Chairman of NIP, on Wednesday, noted that the party would pitch its tent with Atiku Abubakar, presidential candidate of the Peoples Democratic Party (PDP).

She said although she could not defend the PDP “for giving bad leadership from 1999 to 2015”, she would advise Nigerians to vote the PDP back into power on February 23, 2019.

The statement read in part: “When I set out on this journey in 2016, I promised myself one thing — to always put Nigerians first! I invested so much into bringing together all the alternative candidates and when that failed, I invested even more into my race for Presidency. I pursued my bid for the Presidency like my life depended on becoming the President of the Federal Republic of Nigeria in 2019 and I have no regrets whatsoever.

“Indeed, no institution in the entire world could teach me the things I learned racing for the Presidency in Nigeria in 2018/2019, particularly as I started out being an overly idealistic young woman determined to save her country from demise overnight. The experience so far is a compulsory element in my political development and exposure to the electioneering process in Nigeria, so I am grateful.

“My race for the Presidency was programmed to end on 16th February 2019, and it ended on that day. Therefore, the Presidential Election proposed to hold on 23rd February 2019 due to the last minute postponement on the part of the Independent National Electoral Commission (INEC) does not involve me. In fact, the race is only between the incumbent President Muhammadu Buhari and Alhaji Atiku Abubakar. Therefore, every well-meaning Nigerian, particularly those whose party logos are on the ballot sheets should pick a side. Whatever we do on Saturday 23rd February, we will be voting either Atiku or Buhari, i.e. either PDP or APC for the 2019 Presidency.

“I cannot defend the PDP for giving us bad leadership from 1999 to 2015, yet I cannot help but blame the APC for doing a much worse job from 2015 to 2019. Plus whether we call them PDP, APC, PPA, ANN, YPP or NIP, we are all the same people moving from one political platform to the other in search of a place to speak out and be heard, or a place to come to power to serve our people, or a place to run free with our desire to steal our country dry.

“To my mind, the political party platform is not the real issue nonetheless, it’s either Alhaji Atiku Abubakar under the PDP or President Buhari under the APC this time. I make bold to state unequivocally that I stand with Atiku under the PDP this time.”

She went on to list reasons she picked Atiku, which include his choice of Peter Obi as running mate.

Minimum Wage: No Worker In Lagos Can Live With N30,000 -Ex-governorship Candidate 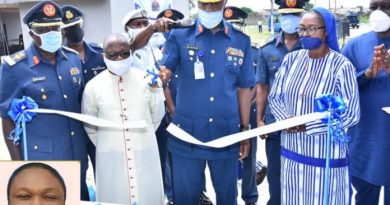 IS THIS THE NEXT LEVEL?

I have deliberately refrained from commenting on the maladministration in Nigeria but it's so difficult to keep to that promise because of the nonsense we are subjected to daily.

The other day,the Governor of Edo State without kowtowing to the whims and caprice of the Czar in Abuja was bold enough to paint the current state of the Nigerian economy which some of us already know.

Rather than applaud his boldness in speaking the truth in these harrowing times in Nigeria, all shades of characters whose administrative and managerial abilities are to say the least wantonly abysmal, are begging the question.

Can we now appreciate why we are in the mess we are now as a country?

The Buhari government has a herculean task to battle with. There is no more time to waste.Six years into an administration is enough to engender real positive change.

Nigeria is being confronted with two choices: immediate fix or bubble burst!

Armed robbers, kidnappers, ritual murderers and cultists have subjected the entire citizenry to perpetual fear and trepidation. So many bad things have descended on the land, and to borrow from Achebe, the country is no longer at ease.

Fortunately, and that is the redeeming feature, Nigeria is awash with some of the best brains and minds in the world.

But will the country beg them to constitute a most formidable Economic Team?

Will Nigeria invite the best political engineers to help sort out the rot in our political structure?

Something as simple as setting up a Special Tribunal to deal with the known past looters and the current ones who brought Nigeria to her knees is not being done.

Vultures are allowed to continue to taunt the rest of us.

Can we now see why there are so many furrowed frowned faces in our streets and on our roads?

As Rawlings journeys home to his maker

Generational Tension And Children Up In Arms By Azu Ishiekwene