* Delay may lead to disputed result

LAGOS, Feb 18 (Reuters) – The naira weakened on the forward market on Monday and Nigerian stocks fell as investors worried that delaying elections for a week could lead to a contested result, fuelling uncertainty, analysts said.

Nigeria’s electoral commission over the weekend postponed for one week a presidential election, hours before polls were due to open. It cited logistical reasons and denied political pressure had played any part.

The one-year non-deliverable naira forward opened at a quote of 401 per dollar, compared with 397 in the previous session. Stocks dropped 2.51 percent to a one-week low. They had climbed past a three-month high on Friday.

“There is some frustration on behalf of investors who have had concerns about this election for the better part of the past year and are ultimately hoping to simply put it behind them,” said Christopher Dielmann, a senior economist at Exotix Capital.

Investors had started to pick up shares to position for a post-election rally, assuming that the election would pass without violence or other problems. That boosted dollar liquidity on the currency market.

The delay hit Nigeria’s dollar-denominated bond yields and could affect demand at a government naira debt auction this week.

“Some investors might still want to wait for the results of the election to gauge risks, such as a possible contestation of the result, which the postponing arguably now has given more grounds for,” said Cobus de Hart, a senior economist at South Africa’s NKC African Economics.

Nigeria has a history of election delays after postponing the 2011 and 2015 votes. President Muhammadu Buhari was meeting with senior members of his party on Monday over the postponement and has urged voters to stay calm.

“The economic consequences of this decision will be felt significantly, as what was supposed to be a smooth process is now mired in lengthened uncertainty and controversy, thereby shaking investor confidence and somewhat eroding the renewed interest from both foreign and domestic investors,” analysts at Vetiva Capital wrote in a note.

“We expect the postponement to directly lead to a reversal in the market with jittery investors quickly withdrawing from the market while others wait on the sidelines.” (Reporting by Chijioke Ohuocha, additional reporting by Marc Jones in London; editing by Larry King) 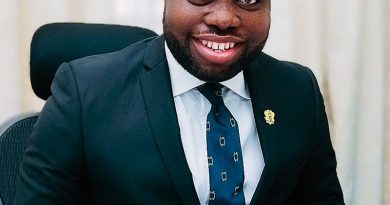 Is King Solomon your father?

In an effort to further strengthen the proactive measures to address the spread of the global Covid 19 pandemic, The Executive Chairman, Igueben Local Govt., Hon (Bldr) Dr. Josie Ogedegbe (JP) on Tuesday 26/1/2021 inaugurated a special task force to enforce restriction orders aimed at curtailing the Covid-19 second wave in the area.

Inaugurating the committee, Hon. Ogedegbe said the government was not particularly happy about the way Covid 19 protocols was being defied. He explained that the inauguration had become necessary to stop the spread of the pandemic.

The terms of reference according to the the Local Govt Boss, include to ensure that all private and public schools in the state are in compliance with the Edo State government directive and there is no gathering of more than 50 persons anywhere in the local government area LGA.

The task force is also to make sure that all public transport carries the required number of people and all market men and women practise hand washing in their markets and shops. Adding that, burials, weddings, political meetings, church services and other congregations that are not more than 30% at a given period of one hour.

Hon Ogedegbe emphasized that there would be mobile court to sanction offenders.

Others are representatives of the, Nigerian Security and Civil Defence Corps, Christian Association of Nigeria CAN, Muslim Community, market men and women and other ethnic nationalities.

Inspector General of Police, Mohammed Adamu has said that it is illegal for vigilante groups to carry arms.-News
***But it's legal for Fulani Herdsmen to carry arms. Buhari Govt is the problem. ... See MoreSee Less

Adamu is clannish and we know he is serving the interest of the Fulanis rather than the collective interest of Nigerians! Security is breached in Nigeria only when the Fulani's live is involved or threatened! All other lives - to him are cheap and and do not matter!!

Nollywood actress and wife of singer, Banky W, Adesua Etomi, is an everyday beauty to behold no wonder Banky W,

COVID-19 has cost $28trn; time to prepare for next epidemic — Bill Gates