I am a disillusioned Nigerian wondering exactly what has gone wrong with the citizens of my country, particularly members of my generation. I have thought and thought really hard, yet answers of all sorts have eluded me, leaving me with no alternative but to cry out to you for this urgent help. I have come, please do hear me out.

For more than half a century, the citizens of my country have been voting for the same thieving rulers who are well older than our country. Throughout the period of their reign, these criminal rulers have brought nothing to our country except starvation, poverty, mass illiteracy, preventable deaths, mass privatisation of public wealth, oppression, etc. For instance, for more than half a century, HALF A CENTURY O, these rulers have not been able to fix electricity in my country, something that countries elsewhere in the world have fixed and even forgotten that it once was a problem. The eventual result is that darkness has hovered over our country for close to sixty years – a period during which our country has been like a forest in the dead of night!

Dear World, whenever the citizens of my country are presented with an opportunity to reclaim their land from their visionless ancestors, do you know what they do? You probably don’t, but I shall tell you. Since the country is in total blackout, citizens of my country buy petrol into their generator sets (if they have one), charge their phones therefrom and then go to the internet to attack other citizens for daring to demand for freedom from our ancestors! After more than half a century, HALF A CENTURY O, the citizens of my country still believe that our old rulers who continue to amass public wealth for themselves at the detriment of millions of citizens will, perhaps through some divine or miraculous intervention, become the caring leaders that we have always dreamed about. But that is not even the main point. During election period, when the citizens of my country ought to reclaim their country from their ancestors, do you know what happens? Our ancestors gather our people in a stadium or any open venue and distribute to them garri, groundnut, onions, sachet water, salt, groundnut oil, rice, seasoning cubes, campaign shirts and caps, sachet tomatoes, N100 worth of recharge cards, eggs, doughnuts, etc without telling them how they intend to run their country. The citizens of my country collect these items and return home feeling ecstatic and subsequently shut their ears against all logical advice that negate the re-election of these criminals. On the day of the election, the citizens of my country throng to their polling units and vote in line with the ‘gifts’ they were given, not the ideas they heard. When, a year later or less, things go awry, the citizens of my country shift the blame to God, accusing Him of giving power to an incompetent and criminal politician.

Dear World, I do not intend to conceal anything within the reach of my memory because I have cried so much for help and my eyes have turned into a desert. Here in my country, Nigeria, our people pay two different bills for electricity alone. They pay for generating their own electricity as individuals and also pay to the national agency that is supposedly responsible for the distribution of electricity. But the national agency does not supply electricity to anybody, it supplies darkness and compels the people to pay for staying in the dark. How do citizens of my country react to this? They clap, they cheer and they defend!

Dear World, whilst growing up back home with my father in those distant times, I often heard the elders of my community repeating the saying, which is loosely translated into English thus:

“Resistance is the natural path that leads to victory and freedom”

But the citizens of my country, particularly members of my generation, have no relationship with resistance. They are synonymous with a dustbin, swallowing and embracing everything that is thrown at them. Push them hard to the wall and they will quietly melt into it and then appear at the other side. No resistance!

Dear World, members of my generation, primary victims of bad leadership, do not protest against unemployment and anti-people policies. They applaud mediocrity, defend bad government policies and handsomely reward the theft of public wealth.

Dear World, as I pen this letter to you, the public hospitals in my country have no drugs, no syringe, no beds for patients. In the same vein, pupils in our public schools sit on bare floors, floors that have no cement plastered on them. In fact, most schools have no proper roof sheets so that when it rains, water drench our children and destroy their books. You see? Our ancestors have spent more than half a century in power yet they have not provided good schools and a functional healthcare system, after HALF A CENTURY O! The young citizens of my country, who often raise their shoulders and proudly sing praises about the sophisticated education they acquired, believe that only members of the old, visionless and analogue generation can lead our country. Oh, World, not only have these failed ancestors kidnapped the destinies of the young people of my country, they seem to have also kidnapped their brain and lock it in a bottle.

Dear World, my eyes can shed no tear, only my heart bleeds right now, and it bleeds with unusual profusion. I am saddened by the realisation that these old men and women, most of whom have no genuine WAEC certificates, are far more intelligent than the young and so-called “educated” citizens of my country. Forgive me, dear World, but I have asked myself if there exist any justifiable reason to acquire academic knowledge when one who is without it can comfortably hoodwink those who claim to be well-schooled.

Dear World, do you even know that our ancestors and oppressors have devised ways of keeping themselves in power till they die? This is it: they created two political parties with the acronym APC and PDP. The plan is that when the citizens of my country get disappointed with say, APC, they will have no alternative but to turn to the other political party, PDP.

Dear World, the extent of my heartbreak is indescribable!  Herein lies my major frustration and the cardinal reason for staying awake to pen this missive to you. You cannot possibly imagine the painstaking task that comes with convincing the citizens of my country to make them believe that they are clearly being scammed by the same criminal ancestors of 58 years. It is impossible, in spite of several manifestations in a period of twenty years, to convince members of my generation that these two political parties (APC/PDP) are a set of twins from the same womb. For instance, towards the fall of 2018, when it became obvious that one of their political parties known as APC would be defeated at the 2019 polls, keys actors in that party began to switch to their sister party to consolidate their self-serving interests. Yet, the young people of my country, whose future these sharks were re-grouping to devour, cheered them as they switched camps with ease. Believe me, dear World, members of my generation are a walking television set. You only need a remote control to confirm this.

Dear World, one of the tragedies of my country is that young people so despise members of their own generation that they prefer to remain bag carriers to old and visionless rulers who have unapologetically ruined our country and its people for more than half a century, HALF A CENTURY O! So when a member of their own generation, imbued with courage and great vision, steps out and seeks support to salvage the country from the old generation, they laugh loudly at him, mock him, inundate him with invectives for daring to say that he can run our country better than the old and disastrous rulers. In the end, they tell him to go and begin from leading kindergarten children and then return after sixty or seventy years to begin his ambition from the lowest political position – councillorship!

Dear World, just recently a member of my generation informed me that she was going to vote for the incumbent despot called Buhari. Though she admitted that this despot is a disaster, she said she was going to vote for him because he has diastema between his incisors, just like she does! But that is not all, dear World. Another member of my generation published on his Facebook account the other day, saying: “Atiku may indeed be a thief no doubt, but he is our thief and we must give him our support even if he is caught robbing a bank”. Can you see for yourselves the criteria for choosing a leader in my country?

Dear World, do honestly tell me, could it be that the old political gangsters in my country may have sprayed a brain-damaging chemical into the Nigerian airspace which the young people of my country may have inadvertently inhaled, resulting in their awkward and imbecilic thinking?

Dear World, flowing from the above, I shall be enlisting your support to salvage members of my generation and other brainwashed citizens of my country from this apparent bondage and slavery. Please, gather for us all the professional that you have in your countries: pastors, imams, prophets, prophetesses, psychologists, medical doctors, chief priests of the highest shrines, spell breakers, etc. Gather for us anything or anyone you think can resolve a problem or break a spell that is more than half a century old!

Considering the urgency of this call, I shall be expecting a swift reaction to this letter, please. 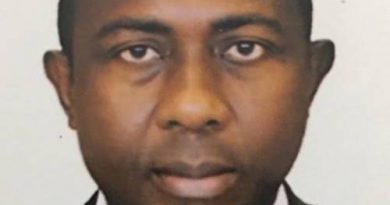 If Chopper Crash Was Fatal, Kogi Govt Would’ve Been In Trouble, Says Osinbajo