The youth in any nation represent the future of that nation because they play a very vital and crucial role in the development of their nation in all ramifications and have always been the major key actor to any of the activities in the country.

Sadly, various RACs were looking like displaced settlements with no adequate shelter, poor security, no water and other basics. Many took a lot of risk, journeying through the cold night, sleeping in the classrooms, on bare floors, many fought the ‘mosquitoes infestation’ war. Corps members displayed ‘patriotism’ on their own part to carry out the assignment with all sense of diligence while INEC reciprocated by treating corps members as “slaves”.

Few weeks ago, the management of INEC in collaboration with NYSC repeatedly assured that the welfare of corps members had been adequately factored into the welfare and security arrangement for administering the 2019 elections but the ridiculous situation and heart-rending images which was widely seen few days ago scornfully depicted the faux pas, unreadiness of the commission and the unfair treatment melted out to corps members.

Just like the case of corps members, a lot has been said about the appalling state of welfarism of Nigerian workers in general. Rather than improve or get better, the situation seems to be getting worse. The dignity for which corps members are known for in various communities has been eroded and the Nigerian authorities seems to be uninterested.

Using the employer-employee analogy as an example to illustrate the whole scenario, it should be of note that treating employees fairly in the workplace is not just a moral responsibility, it is highly necessary to ensure maximum company growth. So therefore, when an employee is treated ‘unfairly’, it results in decreased employee ‘morale’. Low morale results in decreased employee ‘productivity’.

While the paid 19,800 monthly allowance of a pittance still remains a conundrum, the invaluable services that corps members provide to the country is such that the government cannot truly afford to pay for it. Nigerians are left to wonder if the government has any iota of care left for the plight of the corps members scattered across the country serving the nation under the sun and in the rain as instructed and mandated.

There should be dignity in labour and dignity of labour. Corps members shouldn’t have to suffer serving their country. Sadly, the silence of some candidates and stakeholders on how corps members were treated seems pathetic. It shows that they’ve only been concerned about their chances of winning the election.

Apart from working in inclement environments, corps members actually deserve a raise in the elections stipends to meet their basic needs and complement their various efforts. As a kind advice, the NYSC should stop allowing corps members to be used as adhoc staff if there is ‘zero’ or no provision for their welfare and accommodation.

Meanwhile, the Director General of National Youth Service Corps (NYSC) and the Corps Welfare and Inspectorate Department in charge of INEC as a matter of urgency should consider a review of the Memorandum of Understanding the scheme signed with the Independent National Electoral Commission (INEC) on the participation of corps members in the electoral process.

Despite the over N140 billion budget by Independent National Electoral Commission, (INEC) for the 2019 elections, INEC had 4 years to plan for this election, yet the reality has dawned on them, it is crystal clear that the commission has displayed incompetence on its own part to ensure proper logistics and welfare are put in place.

Corps members have shown determination to serve their fatherland, they’ve have collectively resolved to conduct free, fair and credible polls hence INEC and other concerned agencies must commensurate their efforts with good welfarism, this can help in boosting the morale of corps members in the discharge of their duties.

It’s highly imperative to stress that ‘Corps members are not slaves’ – the concerned and respective agencies must as a matter of urgency before the 2019 rescheduled General and the state elections respectively re-modify a reasonable welfare package to restore confidence and erase the grimaces on the faces of corps members.

We need to learn from yesterday and live with hope for a better tomorrow – the current situation shows that INEC has tactically wasted another opportunity to showcase its readiness for a system which guarantees hitch-free elections in Nigeria especially with respect to inadequate preparation, delay in deployment of equipments, poor staff welfare and poor mobilisation of logistics.

Alao Abiodun is a Journalist, He can be reached via email – [email protected] Tweets – @Kingbiodun_ 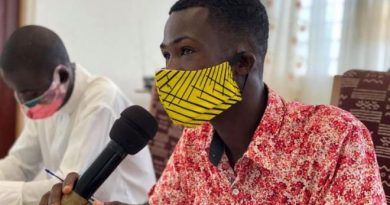