“No, no, no. We cannot continue! We cannot Proceed. Mr. Chairman, you have been compromised”- Elder Orubebe

The introductory quote of this article was uttered at a similar election period. Unlike the present matter however, the election had ended and strange things such as a Professor not being able to read his own hand writing had just occurred.

Within a fully lighted hall, a torch light had to be procured before the figures could be read by the same Professor who wrote it “by myself”. The concerns Elder Orubebe expressed at that collation center 4 years ago may not have meant anything then but they surely do now.

The  Nigerian senate approved the sum of 189billion naira for what has still turned postponed. As at now, it is still unclear if the conduct of the election later might even be more catastrophic than it has already been. It is clear still that despite such a huge sum of taxpayer money going into the election, the Electoral Commission INEC has shown early signs of incompetence.

The INEC chairman Prof. Yakubu Mahmood now reels out as his reasons for postponing the election and they are not things he could not have envisaged. Everything Prof. Mahmood gives as a reason asides the excuse of weather and fire outbreak in INEC offices (which he even claimed to have solved by getting spare Smart Card Readers from other states to make up for those that burnt in Anambra), the other excuses the Chairman now gives are things he should have reasonably forseen acting in his capacity.

It says a lot to the international community that a nation where an important event such as her national election is being postponed at the eve of the event when great personal sacrifice and effort had gone into it especially on the part of corpers undergoing their NYSC programme.

It is impossible not to notice this same lackadaisical attitude in virtually all other institutions in this country. Without regard for people, sudden actions and decisions are taken and people are waved away without any sense of importance given to their effort or individual sacrifices.

In Nigeria, following a waste of people’s time and effort through energy sapping ventures. Leadership tends to go ahead as if nothing happened and refuse to offer due explanation to the Nigerian people. It is too frequent that people do not get as much as an apology and the INEC chairman has still not issued any form of public statement acknowledging the amount that went into transport, lodging, feeding and other such that people incurred to ensure they can vote.

The financial implications of this to the country are not even favorable as economic activities have been greatly affected in the time taken towards preparation for the election.

Away from INEC, there is the issue of how Nigerians have learnt too much adaptation if there is any such thing as too much adaptation. One would expect massive rage following the postponement but rather there is an attempt on Twitter to be the one with the most comic tweet caption for such a bitter national episode that brings shame to the entire country in the international community. All sorts of jokes and satires are being thrown around in a bid to trend by social media icons.

There is lacking now the tough frown that will ensure such does not repeat itself nationally. A walk this morning through a market in Osun state revealed how quickly Nigerians have adapted and moved on with the announcement.

In no time, the “unshockable” nature of Nigerians has made it seem like a normal thing and the Saturday has continued a normal Saturday with no trace of what was supposed to be an Election Day where movement is restricted.

The “unshockable” nature of Nigerians is manifested in how quickly life has gone back to normal. Markets are open. Okada men out. Public vehicles are moving in large numbers indicating there is a market for transportation and more people are going out and coming in. In fact, interstate vehicles have started calling passengers. You would think everyone was prepared already for the postponement.  But no they weren’t, Nigeria woke up to the announcement everywhere in this country and they have responded by moving on with their lives.

All shops are open in the market where I did this survey and activity is ongoing like a normal Saturday. Even food vendors have cooked so fast this morning and are already hawking.

In mere seconds, Nigeria has risen above the disappointment and we have moved on like we have learnt to do. Only few dots of people can be seen conversing about the issue. The numbers in the heated public discussion that started at the newspaper stand in the morning has reduced too and people are leaving the place to engage in more productive tasks.

This episode reflects a lot that is recurrent in Nigeria. Lack of planning such that our Super Eagles, the national football team have even travelled before without their soccer boots for a tournament and had to send someone to bring the correct boots for the players to use moments to the start of the competition.

Our people have died at poorly coordinated recruitment exercises especially the unforgettable Immigration matter under the Jonathan administration. Our examination questions have leaked before the examination held such that the Presidency had to intervene. Light has gone off during a major FIFA lower age tournament we were hosting beaming total darkness to the world that was watching. It is not specific to this issue and this is not the first time Nigeria will cause herself this type of embarrassment.

There constant recurrence of impunity in Nigeria and the attendant disregard for what people think or feel and the sacrifices they have made. In fact, has an entire election not been cancelled in this country to the whim and caprices of just one Nigerian after millions have voted their choice?

Moving forward, our people take it as it is. Nobody wants to bell the cat. The rage begins and ends on radio, Twitter, Facebook and articles such as this one that will proliferate the Internet. Nigerians are yet to really frown on this national problem of impunity.

Koye-Ladele Mofehintoluwa is a student of Obafemi Awolowo University. He writes for several reputable print and online media. He is a member of several volunteer organizations and human rights bodies. He can be reached on [email protected] or on Twitter @Koye_tolu. 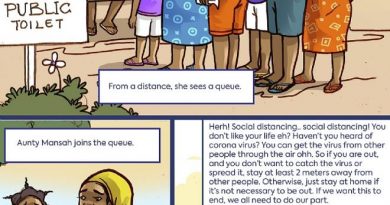