Natasha Akpoti, a senatorial candidate for Kogi Central Senatorial District, seeking to contest on the platform of the Social Democratic Party (SDP), says Yahaya Bello, Governor of Kogi State, wants to “assassinate” her.

She stated this in a letter addressed to President Muhammadu Buhari entitled ‘Governor Yahaya Bello Wants to Kill Me’.

According to Akpoti, the reason the Governor wants to assassinate her is that she “dared to step out to give expression to my ambition to represent my Senatorial zone in this election”.

She urged the President to call the Governor to order, as many of her supporters had been killed.

THE LETTER IN FULL:

As Nigerians head for the polls, I am constrained to draw your attention urgently to the naked and arbitrary show of power, orchestrated murders and the embarrassment Governor Yahaya Bello has become through various atrocities in Kogi State which led your party, the All Progressives Congress (APC), to an unprecedented embarrassment in the state.

In clear and unambiguous terms, Mr. President, Governor Yahaya Bello, has perfected plans to assassinate me for daring to step out to give expression to my ambition to represent my senatorial zone in this election. This did not start today. As a matter of fact, on Friday, 17th of August 2018, Governor Yahaya Bello threatened me in the presence of three of his closest aides; Mr. Jibril Momoh (Accountant General of Kogi State), Mr. Kabiru Onyene (Special Adviser on Domestic Matters) and Mr. Abdullahi Bello, a.k.a. Dollar (Chairman, APC Kogi state) to “abandon my political ambition or face dire consequences”.

This ordinarily would have passed without much worry. Unfortunately, many other recent developments have made it crucial for me to cry out that you kindly save my soul.

Just yesterday Mr. President, two of my supporters were killed at my campaign. At this campaign, it was an organic crowd of genuinely loving people. I was immersed and buried in the love and embrace of very impoverished people who desired a paradigm shift. Some of these people paid the supreme price yesterday from the brutal hands of Governor Bello’s thugs! Their pictures are here.

In only a few weeks that my campaign gained momentum morphing into a movement for the liberalization of Kogi Central, some of my other supporters that have been murdered are Mr. Ojo Enesi, Youth leader of my Campaign Organization in Obeiba, Ihima of Okehi Local Government Area in Kogi state. He was dragged out of his house at about 12:30am on the night of Saturday, the 12th of January 2019 and brutally murdered by a gang of APC thugs led by one Ojo Inna who pulled the trigger on late Enesi.

This was followed by the battery, stabbing and butchering of 8 of my supporters by known APC thugs at about 9am on Friday, the 11th of February 2019 during a door-to-door campaign at Obeiba in Ihima, Okehi Local Government Area. This is besides those whose property have been damaged and those who have been abducted.

The spate of attacks continued on the 1st of February 2019 after one of my youth leaders in the Fulani community, Usman Abubakar, was abducted under the instigation of the Okehi Sole Administrator, Mr. Abdulraheem Ohiare, who on the orders.  This particular unforced and reckless error would have sparked an ethnic clash between the Fulani and Ebira communities in Kogi Central but for the prompt and timely intervention of the Kogi Army Commander, Major General Njoku.

Usman was released on the 12th of February after spending 12 days in a politically financed detention cell, all in a supposed democratic nation.

The names of many victims not mentioned here, to save space and your precious time but who have suffered vicious attacks are well documented and have been reported to the Nigeria Police even as they have continued unabated.

And as if the physical acts of violence were not enough, I have been at the receiving end of slanders and defamation on different occasions in the hands of Bello’s agents including and not limited to his Chief of Staff, Edward Onoja.

This is besides stoking the fire of religion which was watched by a shocked Nigerian audience on a live AIT programme, Democracy Today on the 4th of February 2019. That day, Kingsley Fanwo, DG to Governor Bello declared me persona non grata for elective post because according to him, I was not a Muslim and I “did not have a proper family!” I am at a loss Mr. President, when gender or being a single mother became the disqualifier for aspiring to lead the people.

The worrisome part, Mr. President, is the talk of town in the ears of well meaning citizens of Kogi State, that Governor Bello’s brutal tactics is boosted by his boasts that he derives support from you as his ‘Political Godfather’. This has left many wondering if this was possibly the source of Yahaya Bello’s power drunkenness and executive rascality since he assumed office. The APC machinery in the state is being used by his executives to groom thugs who kill, maim, destroy properties, kidnap and slander members of opposition parties in the guise of compelling an all-round APC victory in Kogi State. In each of this, Governor Yahaya Bello drops your name as his overall objective to deliver votes to!

Dear President, I am glad to recall vividly that on the 30th of August 2018, I attended a summit tagged the ‘Women Political Aspirants Advocacy’ organized by your wife, Her Excellency, Hajiya Aisha Buhari, where you spoke affirmatively towards the support of female candidates vying for different elective positions irrespective of their political platforms.

Mr. President, mine is “A call to service by my people”.

While this might sound like a belabored cliché commonly used by many politicians to hoodwink voters, the verifiable truth on ground is that my people have found purposeful leadership in me demonstrated painstakingly through years of consistent track record of robust advocacy and strategic galvanizing of the populace to hold on to the faith that the restoration of the Ajaokuta Steel Rolling Mill to rev back to life in optimal capacity utilization was soon to be a reality. The citizens of the state are excitedly awaiting the employment this would bring their way and the food that would bring on their now famished homes.

May I also inform you Mr. President that I have also strengthened the capacity of various communities through the instruments of various social entrepreneurship projects I had undertaken for the betterment of the society. These and many more are the evidential credentials costing Governor Yahaya Bello sleepless nights. This was my arrival on the scene with a practised step built and unflinchingly driven by a passion for the grassroots and a complete departure from an accidental, inordinate and focus-lacking ambition.

This is a carefully thought-out decision backed by divine mandate to rescue our people from oppressive and repressive regimes which unfortunately, Governor Yahaya Bello now perfectly represents and illustrates.

As a self-imposed Emperor, Mr. President, Yahaya Bello is not a democratic Governor and has dealt a huge blow and shame upon the crop of youth who ordinarily ought to have found in him an exemplary rationale for venturing into politics.

Mr. President, my only crime against GYB is my brand of people-oriented politics and advocacy, especially my relentless agitation for a legitimate resuscitation of the Ajaokuta Steel Company.

Mr. President, I accepted the call to serve hoping to drive the campaign for genuine change on the platform of the All Progressives Congress in the State.

I pleaded with Governor Bello to provide a level playing field for free and democratic primaries which will make it possible for the best candidate to emerge as the party’s candidate.

My belief was anchored on a conscious understanding that this would deepen our democracy and position the party for victory if the people’s wish was respected.

Unfortunately, this was not to be.

Rather than allowing the voice of the people to prevail, GYB threatened to crush anyone who stood on his way to impose his preferred candidate whom he hoped to exercise control over.
As a true progressive, I had no option but to seek to answer the call of my people using the platform of the Social Democratic Party.

I am conscious of Yahaya Bello’s fear and why he wants to employ every savage cruelty to silence the voice of opposition in the state. It is not my fault that his political influence suffered a dwindling fortune; this is an injury inflicted by Yahaya Bello upon himself owing to his narcissistic demeanour and lack of proper grasp of power as a call to responsibility rather than a juvenile trigger of pump-actions, Bello can already sense the imminent and inevitable defeat of his APC candidate for Kogi Central Senatorial seat come February 16, 2019 to me, Barrister Natasha Hadiza Akpoti, the Senatorial candidate of Social Democratic Party (SDP).

Bello therefore, having lost face with the people has grown into a fit of panic based majorly on how does he explain a loss to you after all his deceitful boast of a robust political base.

Mr. President,  Yahaya Bello has confronted me to name my price and I have turned him down; Yahaya Bello has described himself as the ‘Brutal Putin of Nigeria’ and I had wished him luck. Yahaya Bello has told me Tafawa Balewa was loved by the people and was still killed and same could befall me. In all of these, I have remained strong and undeterred.

By killing and maiming my supporters, Mr. President, Yahaya Bello is writing a script in complete antithesis of your declarations that Nigerian citizens should be allowed to vote for candidates of their choice.

From the foregoing Mr. President, I call upon you not as a single mother or as a non-Muslim, part of the “crimes” Yahaya Bello has accused me of. But I am calling upon you as Natasha Hadiza Akpoti, a Nigerian who has led millions of Nigerians on the advocacy to reposition Kogi and to develop Nigeria, and who is constitutionally allowed to contest elective position, that you please use your good offices to ensure my votes count and to save me and save the lives of my teeming supporters from the murderous thugs being financed by Governor Yahaya Bello.

Please accept Sir the warm assurances of my kindest regards. 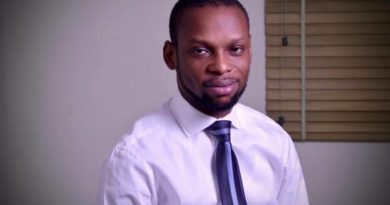 South Africans Are Killing Nigerians, Buhari Is Laughing With Their President By ‘Fisayo Soyombo