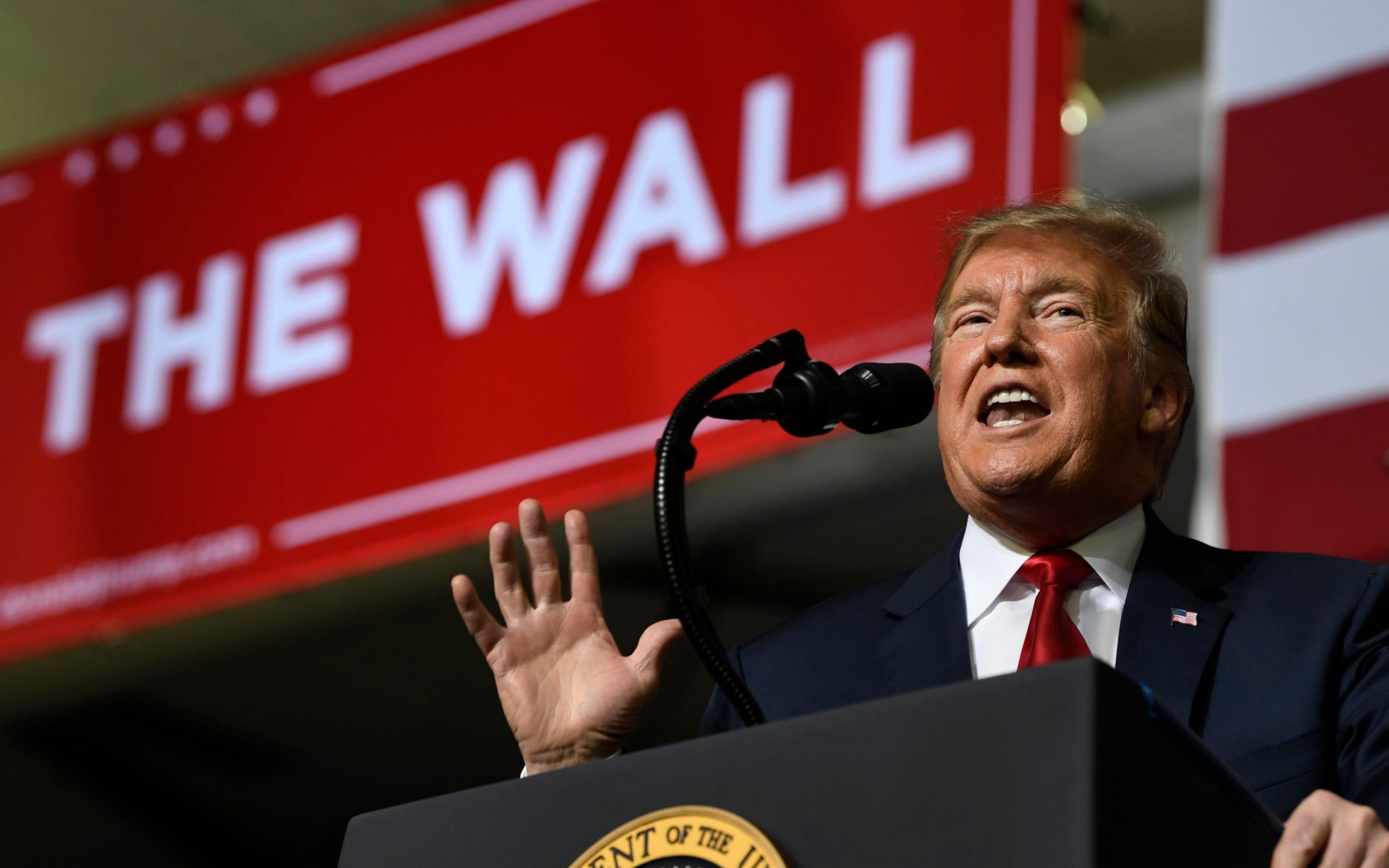 Donald Trump will declare a national emergency to find extra funds to build his Mexico border wall, the most senior Republican in the US Senate announced on Thursday, setting up the prospect of a new court battle.

Mitch McConnell, the Senate leader, said Mr Trump had pledged to sign a compromise deal that would provide more than $1 billion for barriers along the border but would also go one step further.

The announcement, made on the floor of the Senate as Mr McConnell was seeking to secure votes for the compromise package, came as a surprise and triggered a backlash from Democrats, civil rights activists and even some Republicans.

“Declaring a national emergency would be a lawless act, a gross abuse of the power of the presidency and a desperate attempt to distract from the fact that President Trump broke his core promise to have Mexico pay for his wall,” House Speaker Nancy Pelosi and Senate Minority Leader Chuck Schumer said in a statement.

Mr Trump had long floated the idea of declaring a national emergency, which would give him extra powers to unilaterally move around funds, as a way of circumventing Congress and ensuring he could deliver his campaign promise to build a Mexico border wall.

However the prospect of a lengthy battle in America’s courts – a legal challenge is all but inevitable – and vocal opposition from scores of Republican senators was thought to have convinced Mr Trump not to go down that path.

Even Mr McConnell had criticised the idea publicly, saying last month: “I don’t think much of that idea.”

But Mr Trump had come under criticism from leading right-wing US figures over a compromise deal that had been struck between Republican and Democrat congressmen this week.

The US president had demanded $5.7 billion for more than 200 miles of wall along the US-Mexico border. That demand had led to a 35-day government shutdown, the longest in US history, before it reopened for three weeks of talks.

But the new agreement included just $1.375 billion for 55 miles of new border barriers. Furthermore the barrier would be fencing rather than a concrete wall, as Mr Trump had once envisioned.

Sean Hannity, the Fox News presenter who is close to the president, had dubbed the agreement a “garbage compromise”. Mark Meadows, the Republican congressman who leads the influential Freedom Caucus, had also been critical.

The US Senate overwhelmingly passed the compromise spending bill on Thursday before the House of Representatives followed suit later in the day, with a vote of 300 to 128. Mr Trump must sign the bill by midnight on Friday to avoid yet another government shutdown.

By signing the bill and declaring a national emergency, Mr Trump would both avoid another shutdown – which he risked getting the blame for – and be able to show his supporters that he is still building the border wall.

Nancy Pelosi, the Democrat House speaker, said she may launch a legal challenge and warned the move would create “great unease and dismay” among her party.

“It is not an emergency, what is happening at the border,” Ms Pelosi said, calling the claim an “illusion”.

She insisted that the constitution gave the “power of the purse” to Congress, appearing to question whether Mr Trump was overstepping his powers.

Mr Trump has repeatedly stated he will look to other federal sources to fund his wall, noting on Wednesday that the administration has access to “a lot of money” being repurposed from existing federal funds to cover unmet wall construction costs.

But some Republicans have been warning that an emergency declaration would set a potentially problematic precedent.

“I have concerns about the precedent that could be set with the use of emergency action to re-appropriate funds,” veteran Republican Senator Chuck Grassley said in a statement.

“Accordingly, I will study the president’s declaration closely.”

National emergencies have been declared 58 times since the laws were reformed in 1976, according to the Brennan Center for Justice, but none of those occasions was over spending which Congress would not grant.

The move theoretically opens up at least 123 different powers that a US president could use, according to experts. But each one has a tight legal definition which Mr Trump would have to meet.

There has been speculation that the Trump administration has been looking at two particular powers linked to military construction. But in both cases the government would have to be prove why the border wall is needed for national defence.

Lindsey Graham, the Republican senator and close confidante of the president, said: “He has all the legal authority in the world to do this and I will stand behind him.”

Sarah Sanders, the White House press secretary, said “we’re very prepared” when asked about the possibility of a legal challenge but added that she did not expect one.

So, Is Hand Cream with SPF Really Necessary?