More than ever before, the stakes this time are high. Like everywhere in the world except in Africa, political battles are almost always preceded by intellectual warfare.

In Nigeria, political discourse amongst upwardly mobile political minds is always riddled with poverty of logic and deified ignorance especially in times like this. It is always difficult, if not impossible, to engage productively in intellectual repartee with them. There is always a god who bosses over sharp rational hollowness.

I often find myself in political banters, not as a learned pundit or intellectual hell-raiser, but as a humble student of history and rationalism who always find himself keeping quiet in many of those banters only to be badly hit by void. Truly, there is a crisis of intellectual initiative in contemporary Nigeria.

One of such banters I found myself happened recently in the ancient city of Ibadan. It was on the issues that defined the candidacy of the politically savvy Alhaji Atiku Abubakar and that of the lanky and spartan General, Muhammadu Buhari. The badinage became a theatre of nonsense and as usual, yours sincerely was on mute mode.

There cannot be vacuum in any political firmament, it is always cloaked with transactional handshake, world over. It is like the popular aphorism that there is no smoke without fire. Both Atiku and Buhari are products of their own choices.

Unfortunately, the issues that are expected to shape campaigns found themselves conveniently taking the backseat. When the din of political commotion has receded, when tempers have cooled, when frayed nerves have calmed considerably, we will have to resume the dialogue, if not for our own sake but for the sake of our children, for the sake of posterity and for the sake of a nation in dire need of direction.

In the build up to the 2015 elections, yours sincerely described Buhari as a grandpa of necessity at the most virulent time after trying to be born in three different eras. I wrote about how wisdom shaped Buhari while his popularity was spreading like wild illumination to lighten up the dark mood of the country. I had thought at the time that what was needed to prevent us from crashing through the world like a falling stone was his wisdom.

I wrote further that: “wisdom is the vessel unto which he poured himself. It gave him shape, structure. It harnessed him. It contained him. His love. His madness. His hope. This is Buhari, whom the world has suddenly come to see as a grandpa of necessity.”

Are these descriptions still true about Buhari? No, not in his political wisdom which was made evident in Abeokuta when there was a rain of stones in the breezy enclaves of Olumo rock.

President Buhari’s failings are evidently stubborn. Apart from his insularism and his simplistic and mass appeal approach to economic management, he is also infused with a provincialism that has alarmed the very essence of the country’s nationhood. His adherents have argued that his narrow-mindedness can be traced to the political exigencies of the time. He seems to have become a complex abstraction electorally unaffected by his failings.

In politically divided and ethnically fractured nations where zero-sum politics is the name of the game, the struggle for power is often seen as a struggle for the soul of contending nationalities. While Buhari’s candidacy has a cloak of northern hegemony dominance, Atiku’s candidacy is seen as southern push to advance the cause of the minority group. No wonder then that democratic contests are framed as a battle for the survival of the ethnic group in a hostile environment rather than a struggle for office. In such circumstances, there would be a need for a leader who can rally nationalities to a common cause of nationhood. Inclusiveness is the name of the game. President Buhari isn’t present here.

However, Buhari is history in the making. He has trodden where angels dread, for instance as far as to the red wired castles of judges and got away with it. No matter is failings, President Buhari has succeeded in pitching a sizable mass of Nigerians against elitism. In three and half years, he has shown consistency in what he stands for – he wants to be remembered as the President who gave corruption a good fight while whipping the society into line. Excuse the none methodical approach. The streets seem to prefer this behavioural reconfiguration.

His supporters don’t pander to elitist demonstration or struggle. To them, Muhammadu Buhari has become a religion, a deified figure with unmatched electoral value who buys nothing from them but sells his spartanism. They see this as an exemplary trait.

Unlike Buhari, Atiku’s history and association are haunting him. His nomination as the flagbearer of his party revved up his popularity but suffered setback with the Dubai holidays. The former vice president has struggled unsuccessfully to give sufficient traction to his bid. Questions bordering on his ethical rectitude in both private and public life are drowning him.

To the streets, Atiku does not come across as inspiring, dodgy and elitist. But his supporters have argued that he is more mentally alert and cosmopolitan, and is even more tolerant, urbane and inclusive. The challenge is that he has been unable to project his ideals and personality as brilliantly and effectively as his candidacy demands. His stance on his friends’ entitlement to wealth accumulation and amnesty for corrupt officials have only lent credence to his baggage.

On the final analysis, this is a fragile nation on its knees, taking baby steps out its economic woes. Buhari has led the country during the most perilous period defined by scarcity of resources and ethnic agitations on one side, and error of judgement on his side. With lean resources, it will amount to grand self-deception if what is happening to infrastructural recovery is treated with a wave of the hand. There is a strange political will to press on with fund recovery, naming and shaming of looters, which is unpopular among the elites. He has trudged on in tough times.

Atiku has led the country in a period of buoyancy. There is little or no evidence of his toughness in austere period. With a running mate who sees nothing wrong in investing state funds in a family business and with a collective belief that offering amnesty to looters is an anti-corruption wizardry, it would be difficult to argue that the Atiku ticket can stand the test of scarcity.

But more importantly is a paradigm shift in political hegemony that 2023 promises. 2023 will be a defining season for the future of the country. The generational shift in 2023 is as vital as the independence of the country. It would mark the end of the old order and offer a fresh start of a new order.

Buhari’s re-election offers the shortest route to the promises of 2023. Atiku’s election would delay this transition. Therefore, this is no time to experiment, even though we are stuck with two Septuagenarians. One inspires confidence of a much-expected shift in the shortest of time, the other offers reinforcement of the old order. From the foregoing, Buhari becomes a necessary ‘evil’.

Having walked barefooted with history, the vote-weary electorates would have a choice to make. But one thing is sure, it is going to be an election where the common man is king!

Obajeun Jonah Ayodele writes from Lagos. He is on twitter via @Obajeun 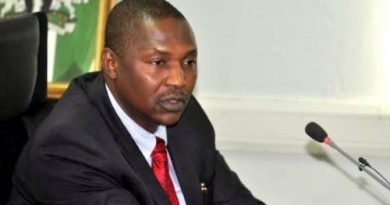 Corruption And The Real Hush-daddies By Sydney Usman Godwin

When it comes to style, one thing that sets Toni Tones apart is her penchant for not following trends. Known