Different types of governments have come and gone in the history of mankind and nations the world over. During these times, when the chips were down, visionary leaders and exceptional members of the body politic have risen to the occasion to recall mankind and nations from the path of impending doom.

I am inclined to think, that at this point in our national history, majority of the citizens are aware of the inhumane social, economic and political realities under which we all are presently grappling to live. According to statistics, 91.16million Nigerians are now living in extreme poverty and six people are falling into poverty every minute. This alone is indicative of a nation on the verge of catastrophic doom. Even worse, several thousands of Nigerians have lost their lives to terrorism across the country, just as several millions have been displaced as a result.

In addition to these, child mortality rate is worsening, under-five deaths are growing worrisomely, democratic institutions are crumbling, records of human rights abuses are rapidly growing, clampdowns on free speech and press freedom have become the order of the day. These are dangerous signs of imminent doom.

In times past, when great nations were threatened with Nigeria’s present unlivable realities, they were either rescued by exceptional leaders or by the peoples of those nations. Although progress and prosperity is often everlasting with the latter and transient with the former, inclusive growth and widespread prosperity are often achieved when both work together conscientiously.

This time, Nigeria, too, has reached her turning point. And, it is of utmost importance that we the people collectively agree to reorder our steps, review our past, and embrace a national vision for the future, and more importantly, embrace the general will (the will of people combined) as against the private will; for it is clear, that Nigeria is presently entrapped  in the snares of elite-conspiracy and the selfish will of the few; and for her to burgeon, this must change.

Again and again, it has been proven that when nations advance the general will in their odyssey of nation-building, there is often an unprecedented wave of a cohesive and long-lasting progress and prosperity. And as the saying goes; it is better to walk in company than in solitary.

In less than 24hours, Nigerians will stroll to the polls to decide the fate of our dear nation for another four years. This act of civic responsibility is not as crucial as the motive driving it. For when the motive is wrong a favorable result cannot be guaranteed. When the means is defective the end cannot be rosy. In fine, we need to ask ourselves; Are we pleased with the administration of the present leadership? Can we trust them with the future of our nation? For often times, we are dangerously caught in the urgency of the now that we forget the coming times.

The poverty that we see today, the hopelessness populating the atmosphere, the insecurity and starvation, the darkness and backwardness, the joblessness and the rest – they all can go away with a single decision: a clearly defined terms of agreement between we the people and those seeking our votes. It is called a Social Contract.

With this social contract, voters’ confidence and public will to demand accountability is a certitude. And, unlike the infamous vote-buying that comes with the trappings of ephemeral gains during elections, albeit for a few; the social compact promises a long-lasting gain – in education, infrastructure, security, vibrant economy, and so on – for the collective.

The very beginning of a reformed democratic process is the decision of the enlightened body politic to engender accountable democracy through the ownership of the democratic process. This ownership is guaranteed when you employ the strategy of a social contract. It is simple logic; you cannot influence what you have zero stake in.

Adebayo Raphael is the National Secretary of the OurMumuDonDo Movement. He writes from Abuja and can be reached on Twitter via @Asorosobioro. 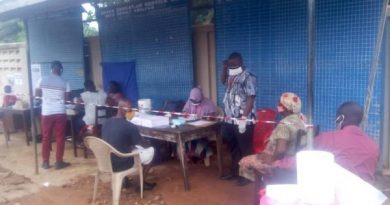 I saw a failed man as soon as I saw oshobaba took over his campaign .