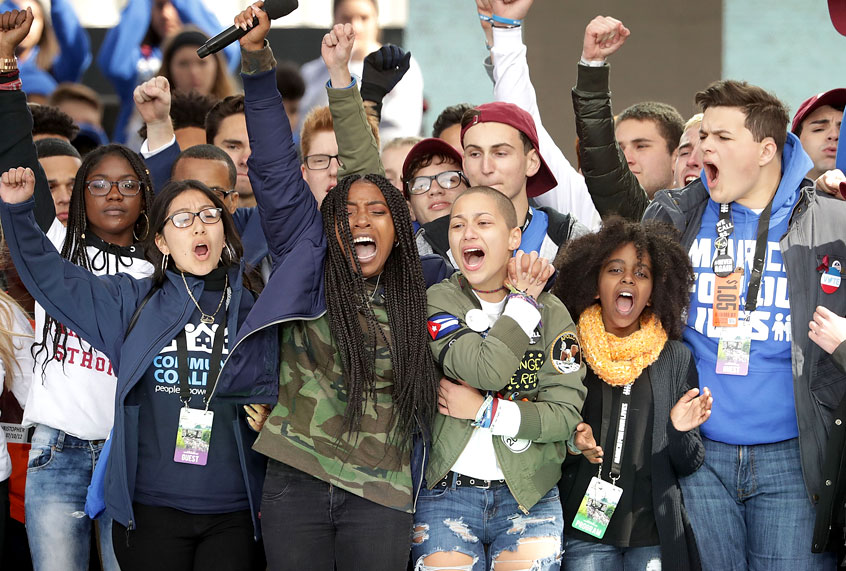 One year ago, a gunman entered Stoneman Douglass High School in Parkland, Florida, killing 17 people in a matter of minutes. In the immediate aftermath, the vast majority of Americans assumed that the response would protract the unfortunate refrain that has come to define any public shooting in the country. Thoughts and prayers. No meaningful action.

This response, however, was different. For a simple, but profound reason. Young people became political and refused to let the issue die.  The young people in Parkland, and young people across the country organized, marched, called, wrote, and ultimately, in the 2018 midterms, voted at unprecedented levels.  Young people have not solved the gun control issue. But they have changed the contours of the debate.

In this particularly dark moment in our democracy, it is not a 2020 presidential candidate that will save us. It is not a report from Robert Mueller. It is, as it has been throughout our history, our young people.

As we enter 2019, the clamors concerning the imminent demise of our democracy ring throughout the country, from all citizens in all parties. In the midst of the longest government shutdown in our country’s history, a tumultuous stock market, an administration that continually flaunts its abdication of constitutional laws and norms, and a pending 2020 presidential cycle that will last almost two years unabated with countless candidates, it’s easy to be defeatist about politics right now.

At the same time that this dysfunction paralyzes our collective citizenry, hope exists. An estimated 31 percent of 18-29 year olds voted in the 2018 midterms, one of the highest rates since the voting age was lowered to 18 in 1971. An unprecedented number of young people have entered this new Congress, and local elected offices across the country.  Beyond the polls, young people have started and led social movements across the country. From #BlackLivesMatter to #MeToo to the environmental protests at Standing Rock, young people are dispelling the notion that they are a generation of apathetic individuals and demonstrating the potential of envisioning a more diverse, accepting, and functioning democracy.

This lesson — that young people can help build a better democracy — is not new or particularly profound: our country’s democracy, founded by white landowners, is one of continuous exclusion and eventual inclusion.  Young people, through their unique ability to be simultaneously idealistic in envisioning a better democracy, and irreverent in accepting nothing less, always push us towards a more inclusive democracy. Our nation’s history is the history of young African Americans refusing to get up from the lunch counter until they were served; it is the history of young LGBTQ activists in the streets marching for marriage equality; it is even the history of young colonialists, most under the age of 35, drafting up a Declaration of Independence for a new country.

Our current moment is no different. A year after Parkland, the youth activists have inspired the country through their relentless activism and ability to call out politicians on their BS as they carry the mantle of gun activism forward. While tangible success, as with any issue in our democracy, has been slow, it is indisputable that the young people have changed the calculus of gun control advocacy in this country. They are refusing to go away.

The lessons from this youth activism, however, cannot stop in Parkland. These young people demonstrate the power and necessity of youth voice in our politics. But there are too many young people who are still not involved. Thirty-one percent turnout is good but is not cause for complete celebration. It is our collective responsibility to ensure all young people are taught to engage politically, and we are elevating their stories in an equitable manner.

It has become another cliché in the Trump era to note the demise of civics education. Indeed, while previous generations had as many as four semesters of civics before graduating high school, today’s students are lucky if they receive one.  When civics is taught, it is often seen as the most boring class in school: learning how a bill becomes a law and the obligations of the three branches of government, and then taking a test.  Civics is not seen as relevant to their lives, but becomes a stagnant, boring concept.

Listen to the Parkland students, however, and it is clear that an effective, relevant civics education helped lead to their unique activism. In her speech days after the shooting, Emma Gonzalez explicitly thanked her AP government teacher, Jeffrey Foster, “for teaching us everything we learned.” One of the other Parkland students noted that writing a 50-page AP paper on gun control had enabled her to make her case to media outlets in the days after the shooting. The civics that the Parkland students received was not just about branches of government: it related to the issues that occurred in their everyday lives. Democracy became relevant.

Effective civics education can work, and it can push the dialogue in our country forward.  But even when it is taught, it is not taught equitably. It does not diminish the efforts of the students to acknowledge that Stoneman Douglas is an upper-middle-class majority-white school. The students have been prepared to hold power through their classes and an environment that has continually told them that their voices do matter. Census data shows that the median household income in the city is just over $128,000 and 84 percent is white. Given the racial and economic oppression that has defined American history, the fact that these students accumulated power so quickly is not happenstance. This power accumulation is how American democracy has too often worked.

It is not random that media outlets were quicker to cover these students than young people, largely of color, largely from lower-income schools, who had been active on gun control in places like Chicago and Baltimore. Likewise, it is also not random that wealthier students are much more likely to receive an effective, relevant civics education, leading to what researchers have termed the “civic empowerment gap.”

These are undoubtedly dark days in our democracy.  A more effective, relevant, and equitable civics education will not solve all of our republic’s woes.  But if there’s anything that history shows us, it’s that change always starts with our young people.  Let’s give them a chance to show us a better way.

Who should cover stories about sexual violence?