Wole Elegbede, the Publicity Secretary of the pro-Amosun All Progressives Congress (APC) faction in Ogun State, has blamed the APC national leadership for the violent disruption of the rally in Abeokuta, the Ogun State capital, on Monday.

The APC rally came to an abrupt end on Monday, when some party supporters pelted President Muhammadu Buhari and other party leaders with various objects, when they attempted to endorse Dapo Abiodun as the APC governorship candidate.

Speaking to The Punch newspaper, Elegbede said the Ogun State chapter of the APC, under the leadership of Derin  Adebiyi would not like to reply anyone, “but what happened involved the APC supporters in the state”.

He went further to say that “some supporters are aggrieved over the emergence of Dapo Abiodun as the governorship candidate, while some like it.”

“As you can see, all the APC supporters agreed to vote for Buhari. What really happened could be traced to the emergence of Dapo Abiodun as the Governorship candidate

“Our APC supporters are happy with President Muhammadu Buhari and are ready to vote for him in the forthcoming election.”

When asked whether his faction of the APC was happy with the ugly development or not, he said: “No dedicated member of the party will be happy with such development. What happened was caused by the leadership at the national level. 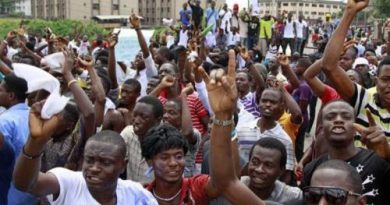 Let Edo entertainment come back to limelight that is my mission ... See MoreSee Less

Esan this, Esan that! They made so much noise on media as tho they will give Obaseki 95% votes in Edo Central. One clown even said APC will not get a single vote in his Local Government.

Their performance for PDP in the zone was completely poor. They couldn't even give PDP 60% votes.

This shameless goat is back again

Have you come back from your hiding. People are looking for you ooo

Dis born troway still dey talk, u should be ashamed of yourself, I pity for the parent dat gave birth to an empty brain like u.

JAS I AM FROM OREDO....WE OREDO VOTED PDP..MAKING IT 43 THOUSAND PLUS VOTE FOR PDP........OSHIOMOLE SHOULD CRY BLOOD

Are you still talking? Are you not ashame of your self

Pls tell us the party that won Esan land? Go hide your face for supporting APC criminals like Tinubullion van.

KABAKA AND IZE IYAMU LOST THEIR UNIT TO PDP....SHAME

What of you that said APC will win 3 LG in Esan? How many Una come win? You that could not even deliver your polling unit even with 5k bribe is still talking. Mtchwwwww

You are finally awake. I am not from Esan but the Esan people did well. Mention one LGA in esanland that your APC won

Continue to cry you people as fail completely with you so call Godfather's oshiobaby n tinubu , remember Edo nor be Lagos oh

JAS I beg nor talk again.

U are a mumu person

IZE IYAMU IS THE FIRST MAN IN NIGERIA HISTORY TO LOOSE AN ELECTION BOTH IN APC AND PDP.. POI HAS MADE HISTORY

U are too meagre and ordinary. Mincing words with u is demeaning.

Go and hide your defeat in shame you are just a stupid clown.

THANKGOD U ARE BACK FRM COMA...

Akoko Edo wen you for come, how many votes una take win PDP? You non see the margin wen we take win APC for UROMI.

The most important thing is Edo central deliver

your principal should be ashamed of himself he was defeated in his LG.

Philip Shuaibu who controls the Obaseki's government is not in agreement with those calling for Esan man or woman to be Governor in 2024.

You are the most confused boy in ize iyamu camp, why not take some rest just the way others do now?

Phillip Shuaibu is a complete failure. How do you describe a man who couldnt win his own polling unit, talkless of winning his ward?

I don't know why you're crying more than the bereaved

JAS ehn, you’re pained. Soon nobody go agree make you support am, yours is support and lose.

Let me tell you the gospel truth. Power will either remain in Edo South or move to Edo North.
JAS ... See MoreSee Less

That was the innitial plan. But God has digressed you and the architect of the plan

That's such a cheap trick you try to play on the PDP family, where are smarter than that. Our focus is to make this new government work, and let the people decide again in 2024. Power to the people.

You are a failure all the time

Are you a fool? I have never in my life seen someone as foolish and arrogant like u. What do you know about politics? You are a really jobless and frustrated human being.

You just failed and you are embarking on another failed mission . Sorry for you Mr failure

That na ur headache. We have successfully dislodged your godfather. PERIOD.

Whether you have been using John Asushei as pseudonym or not, bcos you have been unrepentantly wishing Edo Central evil, it never be well with you and evil will never depart from your life. Ehie gbi ise owebho.

Y una dey reply to dis bastard post, cnt u see he is a bastard, he has domestic problem he swept his brain wit d dirt in his ouse dis morni nd placed dem on d trash he should go pick up his brain clean it up wit Hypo lets see if he will still have somtin meaningful to say, 90% of his life is gone d remain 10 na e remain so wey e tak dey post nonsense.

Always crying.... After all your predictions on September 19 and nothing happened. You better take time to rethink

Just keep quiet ,,or else Edo State will be denied Sleep

You've started again! Same thing your Oshopikin did that caused the down fall of APC is what you're attempting now. For your information, Edo people aren't daft at all, they'll do the needful (Esan agenda) when it's time. Mark my words before you make another mistake!

You’ve never says any truth, your permutations are always wrong. Elder Omon Enojie once wrote whoever you support lose and that just played out again.

Jas at least you will console yourself with something. When we get to the bridge we will cross it

Power shift is in Esan Agenda. Agenda setting is the beginning of any policy formulation. There must be agenda first. Get the true meaning of agenda setting.

They only left to where they belong to.

"Power Shift" is an item in the "Esan Agenda". Of the several items in the agenda, power shift is the next burning issue we are bringing forward to the negotiating table among other stake holders in the state. Power Shift has a terminal date. As soon as it is achieved, or not been achieved, the item itself is exhausted. But resurfaces again at an appropriate time to creating awareness to it. Esan Agenda unlike Power Shift, is sacrosanct. It is a life document that contains the hope and aspirations of the Esan people. It's life expectancy is unlimited.

Minister calls for synergy between TCN, IBEDC for improved services