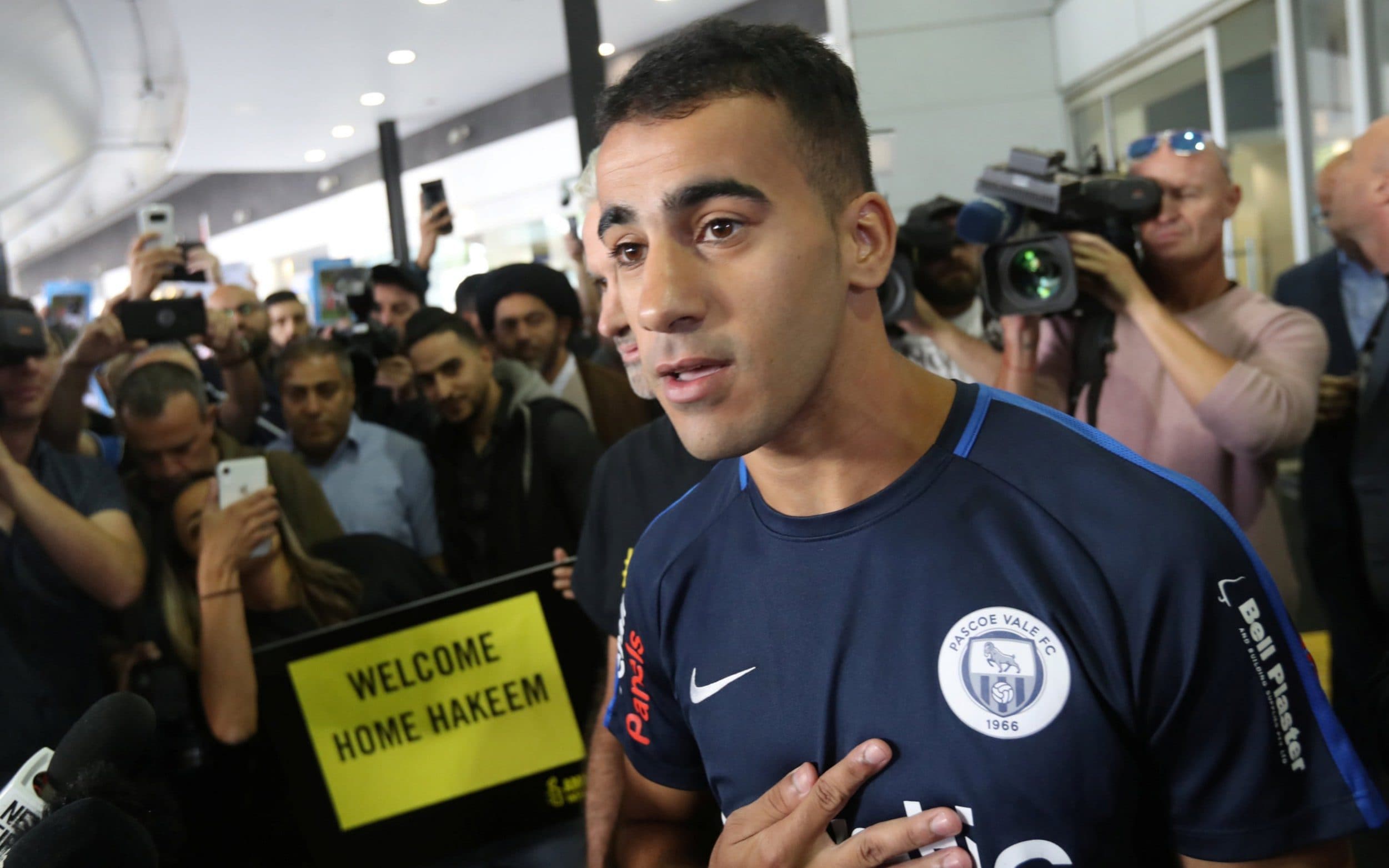 Refugee footballer Hakeem al-Araibi made a triumphant return to Australia Tuesday, ending a two month ordeal that saw him jailed in Thailand and threatened with forced return to his native Bahrain.

A throng of well wishers decked in “SAVE HAKEEM” T-shirts cheered and sang the football anthem “You’ll Never Walk Alone” as they greeted the 25-year-old defender at Melbourne Airport, after an overnight flight to freedom aboard Thai Airways flight 465.

“I want to thank Australia” said a smiling Araibi “this is my country.”

“I don’t have citizenship yet, but my country is Australia. I will die in Australia and I love Australia,” he said.

Araibi was detained on November 27 while on honeymoon at the request of Bahraini authorities who accuse him of offences linked to the 2011 Arab Spring uprisings.

His detention sparked worldwide outcry and a protracted diplomatic dispute between Bahrain, Thailand and Australia that raised questions about the neutrality of Interpol and the writ of Canberra’s refugee protections.

Araibi had expressed fear that he would be tortured and killed if he returned to Bahrain and supporters alleged his prosecution was politically motivated.

“We know all Australians will deeply appreciate the decision, allowing him to return to his wife, family and friends.”

Morrison thanked the Thai authorities, who had earlier left his written appeals for Araibi’s return unanswered, but abruptly dropped extradition proceedings on Monday at Bahrain’s request.

“We have been informed that Bahrain wants to withdraw the (extradition) request… if they don’t want him, we have no reason to keep him here,” Chatchom Akapin, a director-general in the Thai prosecutor’s office, said.

The case had also become a cause celebre in the football world, with stars like Didier Drogba calling for Araibi’s release and FIFA urging the Thai football authorities to intervene.

The international football governing body on Monday thanked Thailand in a statement for “doing the right thing” and said it hoped the athlete “will be able to resume his footballing career soon”.

Former Australian football captain Craig Foster, who led a campaign in the sporting community for Araibi’s freedom, expressed his “deepest gratitude” for the news.

“My thanks go to the wonderful people of Thailand for your support and to the Thai (government) for upholding international law,” Foster posted on Twitter.

While delighted Hakeem is free and will be with his wife today, we are just warming up because this was a fight for the soul of sport and, whilst a blow has been struck, a great battle lies ahead. Thankyou to everyone. An incredibly uplifting win for the human spirit #HakeemSaved pic.twitter.com/BO9mlgvKCa

Sayed Ahmed Alwadaei, of the Bahrain Institute for Rights and Democracy, said the case had brought the plight of others imprisoned in the country to light.

“Two moments captured the world’s attention this month: the photo of footballer Hakeem al-Araibi shackled and barefoot, and the moment of Hakeem breaking the chains and reunited with his beloved wife, friends and the football community in Melbourne.”

Kasit Piromya, a board member of the lobby group ASEAN Parliamentarians for Human Rights, said the case showed the failings of Thailand’s “outdated” laws and policies.

Thailand’s treatment of refugees has been thrust under international scrutiny in recent weeks.

In January, an 18-year-old Saudi woman who ran away from her family arrived in Bangkok’s airport, and armed with a smartphone and a captive Twitter audience managed to outmanoeuvre Thai authorities and gain refuge in Canada following her pleas for asylum from her “abusive” family.

Only last week the Gulf state issued a statement defending its decision to pursue the footballer after he fled while awaiting trial, and he was convicted in absentia in 2014 for damaging a police station.

A statement from Bahrain’s foreign ministry on Monday said it “takes note of the halt in legal proceedings” though it did not confirm it had withdrawn its extradition request.

“The guilty verdict against Mr. Al Araibi remains in place…. (Bahrain) reaffirms its right to pursue all necessary legal actions against (Araibi),” the statement said.

Patients sent home from hospital with no advice on how to cope, watchdog finds

The Christian Council has condemned the chaotic contention among Members of Parliament (MPs) over the election of a Speaker, describing