Five intersecting developments have occurred in this long election cycle that, taken together, and regardless of who wins or loses in Saturday’s presidential elections, can only be good for our fledgling democracy.

1. INCUMBENCY IS DEMYSTIFIED: Nigerians used to fetishize incumbency as though it was an impregnable fortress, and electoral firewall. The last election cycle in 2015 began the process of demystifying incumbency as a guarantor of electoral success. The current election cycle seems to have reinforced that shift. Even some of Buhari’s supporters now concede that he could lose the election. That’s a good thing. Incumbents losing elections is no longer inconceivable. In fact, going by the tenor of the ongoing campaigns, you’d think that Atiku was the incumbent and Buhari the challenger. That’s how decisive the shift from the incumbency-as-protection mindset has been.

2. SECOND TERM IS NOT GUARANTEED: Related to the above development is the fact that it used to be an unwritten principle of Nigerian politics that incumbents can expect to serve two terms in office. Not any more. Just like Jonathan did not secure a second term in part on account of his performance, Buhari may not secure a second term. If he loses, a powerful precedence would have been set or reinforced: that voters have the ultimate say on whether an incumbent deserves a second term and that it is not a given that, once elected, a public officer will serve two or more terms. This can only be good for our democracy because if we go through several electoral cycles where incumbents are denied a second term, perhaps incoming incumbents will fear voters’ wrath and do what is right. They will get the message that you actually have to earn a second term and not assume that it is automatically available to you.

3. PERFORMANCE MATTERS: Continuing and deepening the message sent in 2015 about the electoral consequence of performance in office, this election cycle’s most persistent and far-reaching narrative is competence/incompetence. In this regard, the incumbent’s incompetence has become the main issue in the election, which has become a referendum on his ability go lead and govern. In the past, the ability to cobble together the right regional alliances and to forge the right elite consensuses guaranteed victory in presidential contests. From what is happening in this cycle, that doesn’t seem to be enough. We will see if concerns about performance, competence and ability trump alliances or vice versa. Either way, the discourse of performance has indelibly been introduced into our political space. It will only grow and become more decisive in future electoral cycles.

4. WE NOW HAVE AN OPPOSITION: Whether the PDP wins or not on Saturday, it should be acknowledged that it is nothing short of remarkable that a party that no one wanted to touch with a barge pole in 2015 has so successfully reinvented itself that it could in fact make a stunning return to power four years later. For two years or so after Buhari’s victory in 2015, Nigeria seemed headed for a one-party state, with the PDP crippled by factional troubles stoked in part by the fact that an APC mole, Modu Sheriff, had maneuvered himself into taking over the party’s leadership and would not surrender it. Then came the Supreme Court judgment which sacked Sheriff and paved the way for the election of a new party executive.

Thanks to that Supreme Court judgment and Nyesome Wike’s cash, the PDP was resurrected and got a new life after dissatisfied APC members (re)joined it. The rest is history.

Of course, the party’s ability to rehabilitate itself and to be accepted as a viable alternative to the ruling APC was enhanced by the calamitous administration of President Buhari, a failure so comprehensive and profound that it has made many Nigerians to reminisce nostalgically on the PDP era, something unthinkable in 2015. Whatever the PDP did in power, the APC has eclipsed it multiple folds.

What’s more, by freely poaching the ranks of the APC for new members and by indiscriminately admitting disgruntled members and corruption-plagued members of the PDP, including many who have pending corruption cases in courts, the APC blunted its own accusation that the PDP is a party of corruption. The PDP was able to claim, much to the Nigerian public’s agreement, that the APC had become a refuge for PDP members with ethical baggage. In fact, the revived and resurgent PDP has taken the additional audacious step of now arguing that it is now a clean party, free of corruption, since all its members with corruption accusations and cases and those who fear being charged have joined the APC, leaving behind those with nothing to hide or fear in the PDP. This is, of course, a stretch, but it is indicative of the rehabilitation and swagger of a party written off as dead just two years ago.

Whatever happens on Saturday, at least the fear of a one-party democracy has receded and we now have a vibrant opposition again. If Buhari loses, the APC will remember the Supreme Court judgment sacking Sheriff as a seminal moment (someone said that’s one of the reasons they now hate the Supreme Court; they suspect that Wike bought that judgment). Nigerians will remember the judgment differently: as the event that restored a semblance of democracy by resurrecting a comatose opposition party.

Whatever the outcome of Saturday’s election, the oppositional dynamic that now exists in the Nigerian political space will endure, and that will serve our democracy well.

5. THE THIRD FORCE IS REAL: Whatever you think of the chances of the presidential candidates running outside the APC-PDP party platforms, you cannot discount their unprecedented influence on the debate around the responsibilities of the office of president. They have helped reframe the narrative that being president of Nigeria requires the possession of some esoteric abilities. Young, restless, and impatient, these candidates and their followers have rejected a politics founded on primordial and interest cleavages and on transactional patronage and have instead opened the way to a politics of ideas and problem solving.

The third party candidates have unleashed intellectual and youthful energy into a rather drab contest, enriching the conversation and catalyzing a massive third force movement that now poses a real threat to the rotational hegemony of APC-PDP. Omoyele Sowore and Kingsley Moghalu in particular have captured the youths’ imagination in ways that have made it plausible to think that indeed a third way is possible and that the establishment represented by the two dominant parties can be overthrown electorally.

The two candidates have raised money directly from citizens and have utilized their own funds, bucking the established practice of relying on godfathers and benefactors for campaign finance. They have campaign in traditional rallies and also by making direct approaches to citizens in town hall meetings, street corners, markets, and remote villages — the kind of retail politics that the PDP-APC politicians do not have time for.  They have different socioeconomic visions for the country, but their ideas have been novel and refreshingly insurgent. They offer solutions and ideas that depart radically from the failed approaches of the APC-PDP dyad.

Whatever happens on Saturday, this third party movement is going nowhere and will only grow stronger and resonate farther in preparation for future elections.

Professor Ochonu can be reached at [email protected] 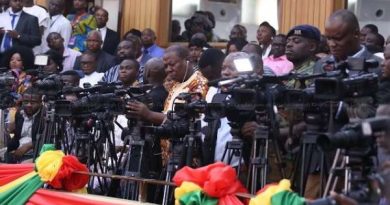 13 drown as vehicle plunges into canal in Philippines