Refugees and internally displaced people topped the agenda at the African Union’s (AU) annual heads of state summit, which ended on Monday – a move welcomed by humanitarians as growing numbers are forcibly uprooted around the world.

African nations have been lauded for adopting a more liberal “open door” policy towards refugees than Western nations, despite being low-income economies.

But refugees are then usually confined to camps in Africa. They cannot access basic public services like health and education and are not allowed to work. Those fleeing within their own country are vulnerable to attacks by armed factions.

“Some African countries are doing a tremendous job in providing safety for neighbours fleeing wars and persecution,” said Yemisrach Kebede, the Norwegian Refugee Council’s (NRC) representative to the AU.

“(But) currently, many displaced people are left without necessary protection and support, both in their home country and in the countries where they seek protection as refugees.”

Over a third of the world’s forcibly displaced people are found in Africa, including some 6.3 million refugees and 14.5 million internally displaced persons, says the AU.

Many have been uprooted due to armed conflict in countries such as the Central African Republic, Nigeria, Somalia and South Sudan. Others have had their lives disrupted due to disasters linked to climate change such as floods or droughts.

Compared to other regions, Africa has a well-developed legal framework, with treaties protecting and providing rights to displaced people and refugees, said the International Federation of Red Cross and Red Crescent Societies’ (IFRC) Jagan Chapagain.

“Yet states often face difficulties to implement and apply such frameworks,” said Chapagain, the IFRC’s Under Secretary General for Programmes and Operations.

“All of those on the move should have access not only to basic services to meet needs like water, food, medical care – but also to protection and to measures that seek to restore their hope and safeguard their dignity.”

The Global Compact on Refugees, for example, was approved by United Nations member states in December and seeks to ease pressures on host countries and provide refugees with access to education and work to help them become self-reliant.

Under the pact, African nations hosting refugees would be able to access funds from Western nations, the private sector and international financial institutions to support those who have been forcibly displaced, aid agencies said.

With aid agencies struggling to raise funds, countries such as Uganda – which hosts over 1 million refugees and allows them freedom of movement and the right to work – have been praised for progressive policies aimed at integration and empowerment. 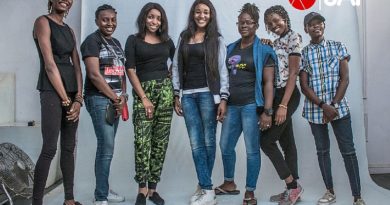 UROMI POLITICS: The Fight Against The Esan North East Chairman To The Extent Of Dragging Him Before EFCC

Mumu you are here again,you are just living a life of shame idiot

My brother go and hug transformer ,Barrister Ojesua is our State Chairman,and there is nothing you and your slave master can do,ooyin!

Where is your traitor Imuse??

PMB Challenged The PDP in Court To Reclaim His Mandate 3 Consecutive Times. He Can't Be Among Those Crooks Threatening Pastor Ize-Iyamu To Drop His Case. ... See MoreSee Less

Angelina Jolie has the pout. Kerry Washington has the sky-high cheekbones. I…have dry, flaky skin. For as long as I

Facebook ‘Supreme Court’ to begin work before US Presidential vote

I have not addressed the press after election — Ize-Iyamu