In six days, Nigerians of voting age will clarify not only whom they are, but whom they wish to be.

Four years ago, I helped bring to the leadership of Nigeria a man I had equally endorsed at the 2011 election: General Muhammadu Buhari, as President.  In 2015, there really wasn’t much of a choice.

This year, there is: Anybody Else.  Anybody But Buhari.  Vice-President Yemi Osinbajo, unintentionally captured the situation a few days ago during a campaign stop in Owerri.

Reaching down to his evangelical side, the pastor told the crowd: “The most important thing is that when the righteous are in power, the people rejoice.”

Then he asked, “Are you rejoicing now?”

The Vice-President seemed to think that he may have been misheard, or that his audience had perhaps got its cue wrong.

He tried again: “Under this government…are you rejoicing?”

Louder came a thunderous tumult, as if the crowd thought Osinbajo was hard of hearing: “NOOOO!!!”

But here is the punchline, and I am going to quote the Vice-President comma by comma in a statement he made as if it were 2015 and he was waxing delirious about the Goodluck Jonathan administration his APC presidential ticket was trying to defeat:

I don’t know who wrote the screenplay of Osinbajo’s Nollywood appearance at that Owerri rally.  Clearly, the answer to his question was supposed to have been a resounding “YES!”

In which case his conclusion, something about righteousness and political power, was supposed to be that Nigerians are happy today because the right people are in power and should be re-elected.

The louder rejection of his proposal the second time appeared to have thrown the vice-president out of his Tradermoni heart and the law professor adlibbed into a verdict against his very purpose.

Now, I believe that Osinbajo, speaking before an audience he understood to be mainly Christians, had hoped to take advantage of their faith.  In which case it is wise to look at the segment of the Holy Book he unwisely—but incompletely—drew from: Proverbs 29:2.

“When the righteous are in authority, the people rejoice: but when the wicked beareth rule, the people mourn,” it says.

It is not surprising that the Vice-President avoided that second part, but his conclusion was unavoidable: Nigerians are suffering because its rulers—whatever they think of themselves—are wicked.

Osinbajo’s testimony against his own cause says almost everything anyone would like to know about where Nigerians find themselves this week as they vote.

Buhari himself continued the effort to market the same theme three days ago, calling on the Pentecostal Fellowship of Nigeria to stand for righteousness and truth, and preach against all forms of corruption, as “only righteousness” can elevate Nigeria.

Mercifully, he was not standing before an incredulous crowd to preach righteousness.  But before Osinbajo spoke, Kaduna State Governor Nasir El-Rufai had inflicted a different kind of righteousness.

I have praised El-Rufai in this column for what seemed to be his clarity of vision, notably in March 2017 when the second of two powerful memos he sent to Buhari, leaked.  The first was in April 2015, before Buhari took his oath of office, and the other in September 2016.

Citing “the progress of our party, our president, our government and our country,” the governor offered Buhari a 30-page, well-reasoned strategic plan in which he challenged the president to revamp the entire apparatus of government so that APC would not leave Nigeria worse than it had met it.

Stressing that the Buhari administration had so far failed to manage the “change” expectations of Nigerians or ‘to deliver even mundane matters of governance’ outside of fighting Boko Haram and corruption, he urged him to “act decisively.”

“Overall, the feeling even among our supporters today is that the APC government is not doing well,” the governor observed.  He encouraged Buhari to consider communicating actively and directly with the Nigerian public to enunciate the government’s plans, strategy and roadmap to take Nigeria out of her economic mess.

For that purpose, he suggested that Buhari use a mechanism “akin to a State of the Union address…preferably in a joint session of the National Assembly,” during which he would explain some perceptions and lay out his vision.

Among others, he pointed out that APC could shape Nigeria’s political culture in [Buhari’s] image through active stakeholders and process engagement, saying, “We are not engaging at all, and [are] taking things and important matters for granted.”

El-Rufai counseled that the institutional weaknesses that enabled corruption to thrive under Jonathan and the persons involved, were still very much in control, “and many are around you.”

He wanted stronger hands and minds closer to the president, describing [former SGF] Babachir Lawal] as “inexperienced, lacking in humility, [and] insensitive and rude to most VIPs,” and Chief of Staff Abba Kyari as “totally clueless.”

El-Rufai then spelled to Buhari the time: “You have both a crisis and opportunity in your hands to turn around our country in the right direction.”

But APC and Buhari’s ineptitude were just fermenting.  They ignored all progressive voices inside and outside the party, and rotted in ambition, focus and performance.  Buhari, for his part, never read any of El-Rufai’s memos: he handed them to the same key officials the governor had criticized, who shredded them and demonized him.

Last week, with days before the election, a key measure of the depth of the Buhari rot emerged: the same el-Rufai appearing on television to threaten the massacre of foreigners who “intervene” to disrupt Buhari’s desperation to remain in office.

It was a strange response to international expressions of concern about the elections being free and fair.  Ambition and power clearly overrunning good judgement, el-Rufai threw away every benefit of the doubt.

But he illustrates what faces voters in Saturday’s ballot: the mind-boggling reality that a government that was enthroned with such overwhelming support is baying for blood for re-election.

But Buhari deserves a heavy defeat this week because as el-Rufai had himself predicted, he and his party have in real terms made things considerably worse for Nigeria.

Sadly, Buhari has been fully exposed as fickle of conviction, frail of body and fragile of mind.  To say that he will rise beyond himself to inspire and elevate Nigeria is to bathe our children in sewage.

The truth is that the very deficiencies identified by el-Rufai in 2016 were not symptoms but chronic diseases that have now mutated, with APC politicians now contradicting everything they said in 2015.  This has nothing to do with PDP, but everything to do with Buhari’s character and poverty as a man.

In the real world, when there is an infectious disease, you flee. This week, Nigerians should free themselves by voting for Nigeria.  That means against Buhari. 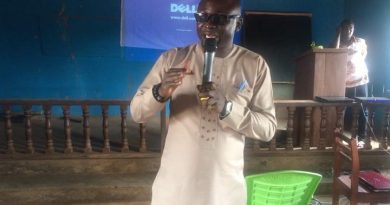 2019 elections: INEC to arraign varsity lecturers over malpractices in A-Ibom

Former National Chairman of APC, Comrade Adams Oshiomole captured while voting for PDP in today's Edo gubernatorial election.
He is APC at night but PDP in the day🤣🤣 ... See MoreSee Less

The facemask makes me to blv is not d old election

Even in his dream he won't try it

Hahha are you serious

Nemesis at at work

Headmistress of Nsawam Senior High School (SHS), Nsawam, Eastern Region, Madam Gladys Asiedu, has made a passionate appeal to the