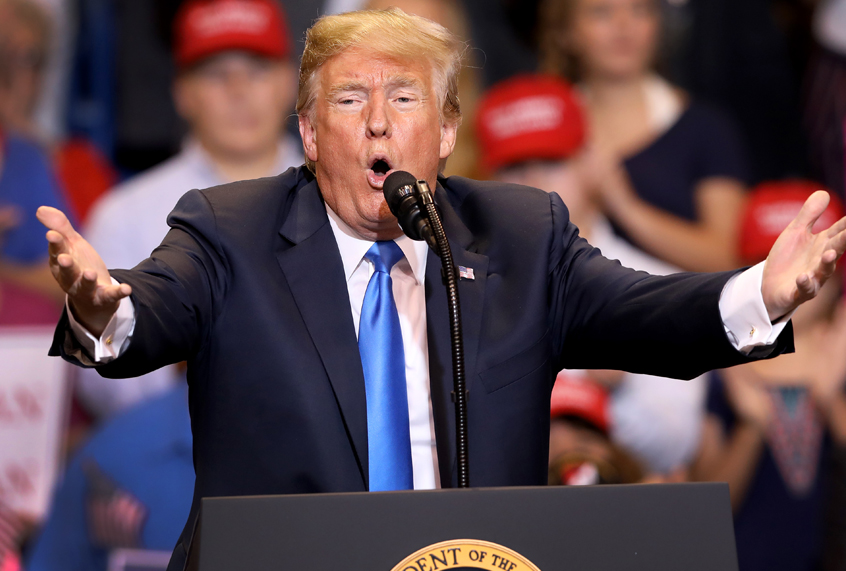 I’m sure everyone will be relieved to know that the long three-month drought is over. President Trump is getting back in the saddle and will be giving his first rally of 2019 on Monday. Feel the magic!

He’ll be visiting El Paso, Texas, the border city he erroneously claimed in the State of the Union was one of the most dangerous cities in the country until they put up a “wall” (which is actually a fence.) In reality, it was one of the safest cities in the country before the fence and remains one of the safest today. But he’s going to go there and tell his local fans that they can believe him or they can believe their lyin’ eyes. Local officials don’t seem inclined to go along.

That lie about El Paso wasn’t the only one he told about immigration in his dull address last week. During his long disquisition on the horrors of illegal immigration he ad-libbed:

Legal immigrants enrich our nation and strengthen our society in countless ways. I want people to come into our country in the largest numbers ever, but they have to come in legally.

The prepared speech did not include that part about the largest numbers ever. And for good reason. Even the part about “I want people to come into our country” wasn’t true, much less the declaration that he wants more immigrants than ever before.

The Trump administration’s policies on illegal immigration are well known. He wants to hire thousands of more border cops and build a big wall to stop it. But the president’s policies are anything but welcoming to legal immigrants either. According to USA Today:

His administration has granted fewer visas, approved fewer refugees, ordered the removal of hundreds of thousands of legal residents whose home countries have been hit by war and natural disasters and pushed Congress to pass laws to dramatically cut the entire legal immigration system.

The Cato Institute, a libertarian think tank often sympathetic to Republicans, characterized the Trump immigration reforms as  “the most severe restriction on legal immigrants since the 1920s.”

The Trump Organization’s policies, however, have been much more forgiving. We now know that even as the president has been grotesquely characterizing unauthorized immigrants as rapists and criminals who endangering all our lives, it turns out that his hotels and golf courses have been knowingly employing undocumented workers for decades (just like every other service business in the country.)

The Washington Post sent a reporter down to Costa Rica to check in with some people who worked for Trump properties over the years. One is quoted as saying of Mar-a-Lago, “Many of us helped him get what he has today. This golf course was built by illegals.”

It isn’t just groundskeepers and maids Trump has hired over the years at his properties. Recall that in 2017 a judge unsealed a court settlement from 1998 in which Trump had paid more than $1.3 million stemming from his illegal hiring of undocumented workers to build Trump Tower back in 1980. This is a long-standing Trump practice.

He isn’t alone in this, of course. But he is certainly the only one to run for office demonizing his own employees as rapists and murderers. Why he isn’t asked about this at every press availability is a mystery.

On Sunday the president was tweeting about the Democratic budget conferees having supposedly sabotaged the negotiation because they “want a cap on convicted violent felons to be held in detention!” This isn’t true, of course. It’s the opposite. They are trying to force the government to prioritize the detention of violent felons over kids and refugees by limiting the size of the camps they are building to house people near the border. So Trump is obviously being kept apprised of the talks and can’t help but talk about it.

He also tweeted out a bizarre new alternative immigration “fact”  that had everyone scratching their heads:

First of all, Trump is letting his little white slip show with this one.  Since nobody said anything about illegal immigration, he obviously puts all of Latin America in the category of “shithole countries” full of people the U.S. doesn’t want.  Presumably he wouldn’t be so distressed if those nice Norwegians all wanted to come to America. It wasn’t long ago that Americans were proud of the fact that so many people from other countries wanted to come here.

The “open borders” trope is just nonsense. If Democrats believed in open borders they wouldn’t be approving billions for border security to solve a nonexistent crisis Trump has invented for political purposes. If he keeps this up they won’t have much to lose by putting that money to work doing something useful.

Finally, this isn’t a poll. It’s from a blog post from Gallup’s chairman, Jim Clifton, who is apparently a right-wing kook looking for attention from people of similar mind like Breitbart — which dutifully blared out headlines like: “Gallup: Five Million Latin Americans Coming to U.S. in Next 12 Months!”

Here’s a good question about caravans: How many more are coming?

A whopping 27% said “yes.” So this means roughly 120 million would like to migrate somewhere. The next question Gallup asked was, “Where would you like to move?”
Of those who want to leave their Latin American country permanently, 35% said they want to go to the United States. The Gallup analytics estimate is that 42 million want to come to the U.S.

But the Gallup story to which he refers made clear that most people who state a desire to migrate rarely actually do it. In fact, in the countries they surveyed, only around 2 percent of respondents said they were planning to do it. Even among those, most won’t follow through.

Steve M at NMMNB helpfully pointed out that many Americans say they want to migrate too. That number is up from 10 percent during the Obama years to 16 percent today. That adds up to about 52 million people. Yet only about 9 million Americans actually live abroad.

People say they’d like to move to another country all the time. It doesn’t mean they’re likely to do it. In the case of the migrant “caravans,” we have a humanitarian crisis in Central America that’s driving people to seek asylum in the U.S. The vast majority of them are just seeking safety and some kind of security. They certainly aren’t coming here for the warm welcome and generous hospitality.

Do you know that the air that comes out of pot while cooking is called Airport...?🤸🤸🤸😂😂 ... See MoreSee Less

Sence no go kill u

Donald Trump rallies the troops in Phoenix: Unfortunately, that’s not a metaphor