In today’s dynamic world of prosecuting wars, a good offense is said to be the best defense. Being on the offensive whenever it is applied to any endeavour –including military combat –is hinged on the elevation of proactivity above passive attitude. Undoubtedly, being proactive brings the fight to the opponent, and ultimately culminates in hindering the ability of the opponent to mount any attack. Although debatable, the reverse is the case if one is laid back.

Boko Haram, arguably Nigeria’s greatest headache has been around for a decade without shying away from consuming 27,000 people and destroying their livelihoods in the process.

The casualties have grown in the past few years. For instance, a UN report says thousands of women and girls were abducted in the last two years while it is estimated that close to 300 children have been used as human bombs. Contentiously, these attacks have grown in the past year or two when government was busy claiming it has technically defeated Boko Haram and seems to have reduced its offensive against the insurgents.

Many politicians, analysts and scholars within and without Nigeria have agreed and disagreed on the possible reasons for the emergence of Boko Haram and its continued relevance and capacity to launch attacks within Nigeria’s territory. Truly, Boko Haram crisis can be explained from different perspectives but as with most complex crises as this, these explanations are inexhaustible as more facts and scenarios present themselves quite often. Research has however shown that a number of vital pull and push factors of the crisis in Nigeria are largely economic and social in nature.

That is why the recently concluded Second Regional Protection Dialogue (RPD2) hosted by the Nigerian Government and organised by the United Nations High Commissioner for Refugees (UNHCR) in Abuja could not have come at a better time.

The RPD2 came on the heels of the first which took place over 2 years ago and led to the adoption of an action plan called Abuja Declaration by countries within the Lake Chad Basin. It also afforded relevant UN agencies and Lake Chad Basin governments to take stock of progress made in the implementation of Abuja Declaration, examine challenges faced and proffer the way forward.

The Dialogue which culminated into the simultaneous launching of a three-year Humanitarian Response Strategy (HRS) from 2019 to 2021 and Nigerian Regional Refugees Response Plan (RRRP) from 2019 to 2020 is seeking the total sum of $983 million for implementation of the two plans. Of this amount, $840 million is needed to implement the HRS while $135 million is required for the RRRP to provide food, water, shelter and protection to IDPs and refugees, the UN says.

If there is any take home from these plans, it would seem that more than ever before and with the cooperation of relevant humanitarian actors there is a renewed attempt to explore the nexus between economic and social aftermaths of the crises in the region by decisively attending to the nucleus of prevailing conditions that may have brought Nigeria down this road.

Understanding the vicious nature of war –especially the type Nigeria and other LCB countries are contending with –and finding every opportunity to starve the enemies of instruments of war by cutting down on human supply and sympathizersto Boko Haram’s ideology could not have been better addressed in the newly launched plans. This move by UN and its partners, applauded by President Buhari who was represented by Vice President Yemi Osinbajo at the unveiling of the strategy documents serves Nigeria with another moment of retrospection.

“I must say that the current rate of return of these IDPs and refugees is encouraging; and this is due to improving security in many areas that were once out of bounds. Let me also specially commend the United Nations High Commission for Refugees (UNHCR) and other development partners for their efforts in ensuring the safe return of the IDP and Refugees.

“Our challenge now is to ensure that this improving security extends to the other areas in which we have witnessed recent unfortunate setbacks,’’ Osinbajo said.

The need to wake up to the reality that Boko Haram’s capacity to launch attacks is still very much potent, that there is need for all hands to be on deck and recommit to the speedy implementation of all the objectives of RPD2 has arguably never been so apt.

Time is however of the essence. Accordingly, the sum of $50 million is urgently required to implement a 90-day plan to address the needs of those newly displaced in the past few weeks, says Edem Worsonu, Head of Office, United Nations Office for the Coordination of Humanitarian Affairs (OCHA).

“We are about to launch a ninety-day plan within this plan, seeking for $50 million right now within the 840 million to assist new arrivals who have moved recently from insecurity.

We also call on the Nigerian private sector and the government, so that we can join hands and deliver the assistance to the people. But we call for urgent funding for people in need right now,’’ Worsonu said.

Herein lies the challenge. Not unknown to Worsonu and other humanitarian actors is the issue of funding. While donors should be commended for their continued support in ameliorating the sufferings of the people in north east Nigeria and the entire LCB, more still needs to be done. For instance, an estimated 6.2 million people worst-hit by Boko Haram crisis in Borno, Yobe and Adamawa states, the same number of people in 2018 are being targeted with less budget due to the assessed needs and the realistic capacity to deliver aid.  This year’s budget which is around $250 million less than the previous year represents about 36 per cent of the total funds realised from donors in 2018.

If there is anything as important as time, it is the decision by humanitarian actors to be wholly committed to implementing the objectives of the second dialogue to the latter not only as policy document but as arguably the greatest non-military offensive against Boko Haram in a long while. 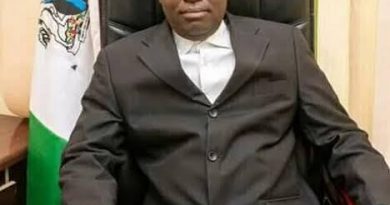 The Director of Finance at the University of Mines and Technology, Jonathan Sakoe, has been surcharged by the Public Accounts