It is no longer news that President Muhammad  Buhari is neither mentally nor physically strong enough even to run his own life. So in essence, the destiny of about 200million of us lies not in the hands of the man we elected but in the hands of a few men to whom the President himself is but a puppet hardly in charge of even his own thoughts.

Now here are the implications,

Seeing as the President can neither read even the things he noted down with his own hands, nor understand a simple instruction of “press the button” without having it typed boldly for him as we saw during his commissioning of oil drill two days ago, it is safe, reasonable and even logical to assert that as it stands now, we really don’t have a President in the real sense of the word.

How will such a President know what he is signing?

How safe are you in the hands of a President who is incapable of doing anything on his own without being guided like a baby with special need?

How safe are you in the hands of men who would use a helpless old man in the manner President Buhari is being used currently?

If you are Yoruba and somehow, you think to vote for Buhari because of the promise of 2023 presidency, please think again. A Cabal that refused to allow Professor Osinbajo just to act as President while Buhari was ill, is this the same Cabal you are hoping will hand you the Presidency in 2023 WHEN THEY WOULD NO LONGER NEED YOU FOR ANYTHING? Of what use are you to them when they will have finished their second term and no longer need your vote? A Cabal that “trashed” Tinubu immediately after the last election and attacked Ile-Ife handcuffing Obas and parading them simply for defending their land against Hausa/Fulani invasion at a time they still need your vote for a 2nd term, is this the people you think will honour a mere unwritten agreement after they might have gotten all they want from you?

If you are Igbo from the Indigenous People of Biafra (IPOB) and you are hoping to boycott this election and codedly help Buhari win a 2nd term because somehow, you think chaos and murderous indiscretions of the Cabal will precipitate the dissolution of Nigeria from which Biafra will rise, I regret to inform you that you couldn’t have been more wrong. Yes, a second term for the Cabal puppeteering Buhari will yield nothing but blood and sorrow but the victim won’t be the Cabal. The victims will be ordinary Nigerians including you. In fact, it can be argued that you will be among the worst hit. Don’t forget, in the eye of the unjust government, you are still a terrorist group, banned from holding rally, meeting or any form of demonstration. If this government returns, you need no prophet to know that you will be treated to a fate far worse than death. And, the United Nations (UN) won’t come to your aide. If the death of over 3 million Biafrans and the self-immolation of Bruce Mayrock in front of the UN building didn’t get the attention of the world body 5 decades ago, it is unreasonable to think the same UN will rush to intervene in an internal affair of a sovereign State because of the death of less than that figure. Again, you won’t even get the sympathy of other Nigerians who would then see you as the enemy who used the boycott to help their common oppressors get an undeserved 2nd term.

Do not alienate yourself and behave like our Pharaoh even when you are meant to be our Moses. Please do not boycott this election for whatever reason. We are yet to recover from the mistake that was the boycott of 2006 population census. We saw the vanity of election boycott during the last Anambra governorship poll.

In the name of whatever you believe in, I urge you to agitate to remain alive first before agitating for Biafra. Remember, the dead has no need for an independent Nation.

There should be a time when we show solidarity to a man who means a whole lot to us as Igbo youths but there must never be a time when we do that at the expense of the common good of the same people we claim to want to liberate.

Igbo businesses have been dealt a deadly blow by the demonic policies of this govt. Millions have lost their jobs. Hundreds of thousands have lost their lives. Do not side with our Oppressor by boycotting this Presidential election. If you do, Ndigbo will respond disproportionately. As a people, I can tell you that the Igbo have no absolute loyalty to any man, not even their gods. The moment you stand against their interest, they treat you like the enemy, regardless of what you’ve done for them in the past.

Ndigbo calls you their own, do not bear a hand in our death.

It is just three (3) days to the end of the Permanent Voters Card (PVC) collection exercise, please go out there and collect your PVC today, not tomorrow and ensure your family and friends do the same. Tell your neighbour. Announce it in your religious gathering. This election is Make or Mar for every Nigerian. It is not about PDP versus APC. It is not even about Muhammad Buhari versus Atiku Abubakar. It is about our right to draw breathe like every living soul. It is about our right not to have our right to life be determined on the basis of our religious affiliation or ethnic stock. It is about our right to live with dignity and have a President we will not develop emergency high blood pressure each time he is to speak in public because we fear he might mistake President Donald Trump for Nelson Mandela.

Get your PVC and exercise your right to vote. 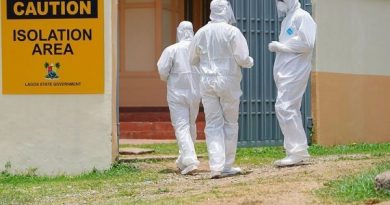 Let's see how all that will play out

My guy, the portal uploading won’t let anyone rig, fill result sheet, all agents sign sheet, upload online while you have a copy

No such wonders in Edo State election.

Na inec do the vote? Did they not count votes n record results in each poll unit? Are there not parties' agents who certified n signed? Wouldn't they give report to their parties? Don't they have copies of the results?

Forget, obaseki don win e don win, if APC get plan be dem for not dey buy one vote for 5k today and we still fuck Dem up.

Staffs, both teaching and non-teaching of the University of Agriculture and Environmental Studies (UCAEs) are complaining about the delay in