President Muhammadu Buhari on Tuesday made another gaffe, something fast becoming a trademark of the presidential campaign rally of the All Progressives Congress (APC).

Speaking in Ekiti State during the day’s campaign rally, the President said he assumed office in 20o5 — the latest in a string of gaffes that include inventing the word ‘governotorial’, handing the party’s flag to someone entirely different from the recipient, saying he came to office on May 19, 2015, and mixing up the years during which he was Petroleum Minister.

“Distinguished ladies and gentlemen, there is hardly anything new that I can tell you,” Buhari said on Tuesday.

“I am very pleased the Vice President is here and the Chairman of the National Economic Commission [sic] has told you in detail what we are doing, especially that affects your state. I assure you what the Minister of Transportation said — Amaechi — because he’s in charge, he told you what we’re doing about the railways from Lagos to Kano through the states along the Nile; that we’re very conscious of the promises we made when came in 2005.”

Video of I Came Into Office In 2005, Says Buhari

At the end of his speech after another presidential campaign rally in Warri, Delta State, on January 17, Buhari was to hand over the party’s flag to the Delta State governorship candidate of the party. However, he said: “I am handing over this flag of honour to our presidential candidate.”

When the man to his left corrected him, saying “gubernatorial”, Buhari responded with “to our senatorial candidate”.

Also, speaking on January 16 at the presidential campaign rally of the All Progressives Congress (APC) in Lokoja, capital of Kogi State, Buhari had told the crowd: “I assure you that I am very aware of your appreciation of the efforts for what we were able to deliver since came in 19th of May, 2015.”

Again, on January 17, while speaking in Warri, Buhari had said he was Petroleum Minister from 1978 to 1979.

“I am impressed by what previous speakers have said, especially the Minister of State for Petroleum who told you what we have been able to do in Delta State, because he happens to come from here and he happens to be my Junior Minister as Minister of petroleum Resources,” he told the audience.

“Since 1984, or 78 to 79 when I was the Minister, I never lost interest in the petroleum industry. I am acutely aware of your influence because God has placed you on top of this national asset. I hope you will understand and appreciate the favour God has done to you in favour of the rest of Nigerians.

“I am trying to remind you to please reflect very seriously: where were we when we came in 2015, where are we now? What were we able to achieve with the resources available to us. I assure you, under this leadership, is to serve Nigeria.”

However, this is untrue. As Head of State, General Olusegun Obasanjo appointed Buhari as the Federal Commissioner (now known as Minister) for Petroleum and Natural Resources between March 1976 and June 1978. When the Nigerian National Petroleum Corporation (NNPC) was created in 1977, Buhari was also appointed as its Chairman; he held this position until 1978.

How SARS went off course, own POS machines for easy ‘transaction’ 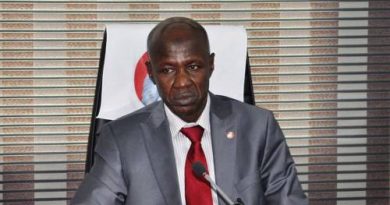