For many persons, this period is a critical time that will define many things for Nigeria.

So we won’t be forgetting easily, the general election is around the corner,  a ritual we perform every four years.

Today, I have tried to reflect on the different angles surrounding the election. In Churches and Mosques, prayers are ongoing about the Unity of Nigeria, in the creeks, Militants have warned that any attempt to rob the region off any shine by the virtue of the election will be stiffly resisted. IPOB has announced referendum for February 16, 2019.

Investors are very careful at this moment, the European Union have come out to condemn justice Onnoghen suspension, the United States and United Kingdom has towed the same line.

The average man on the street has started debating the legality of collecting money for votes while some say it is national cake.

With thirteen days left to the general election, trains have become very free and constructions are springing up.

In the name of our dear native land, I should emphasize and again urge everyone to understand that though tribe and tongue may differ, before, during and after, we must remain in brotherhood.

What do you say about a country with rich human resource and population that has a rich culture and richly blessed.

Many events are taking place right now that even some have threatened to break-up but we must begin to go beyond words for the election to start orientating everyone on why the election needs to be peaceful.

Every parent must call their wards and enlighten them on why peace is essential,  why Democracy is the best and why they should not risk their lives for little amount of money.

Nigeria must not be giant of Africa by population alone but by every intellectualism available and organization in doing things.

I must also in this piece urge the Independent National Electoral Commission to shun all activities that may irk the masses and lead them to the streets.

I remember after the 2015 general elections when the incumbent as at then, Goodluck Jonathan lost to President Muhammadu Buhari, he conceded defeat and has remained a man of honor till date,  the candidate who ends up not emerging from this general election should either approach a competent court of law or concede to losing the elections , any candidate can only contest elections if there is Nigeria.

The future of Nigeria is now, people must be able to carry out their duties of voting without any intimidation.

The instances of the Osun and Ekiti states election where observers, journalists and independent eyewitnesses alleged foul play must be stopped.

Many persons have called the Osun and Ekiti state elections street election, Nigeria may not survive a street election even if Osun state managed to survive.

The pride of our forefathers must be retained, in the name of our dear native land, I seek that everyone sees Nigeria as his or her concern. This election may go on as the most interesting one since 1999, but let us not take it beyond the borders of interesting so our efforts as a  country will amount to nothing.

As we go to the polls, I am very hopeful that we will all serve our fatherland with love, strength and Faith. 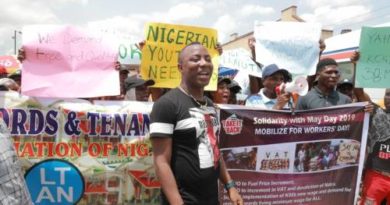