BEIJING, Feb 1 (Reuters) – An executive at China’s state-owned Sinochem Group will head the China operations of global seed and agrichemicals firm Syngenta, owned by China National Chemical Corp (ChemChina) which has been reportedly in merger talks with Sinochem.

The current president of Sinochem Agriculture, Qin Hengde, will be “retained” to oversee Syngenta’s China business, said Andrew McConville, a Syngenta spokesman based in Basel, Switzerland.

Qin will replace Syngenta’s Regional Director for China Andrew Guthrie who is retiring at the end of March, said McConville.

The move was announced internally on Jan. 24, he said.

Reuters has reported since 2016 that Sinochem and ChemChina have been discussing a merger which would be worth well over $100 billion though company executives have denied it. Last July, Chinese financial publication Caixin reported that the companies would merge though a Sinochem spokesman at the time declined to comment.

A spokesman with Sinochem’s agriculture division declined to comment on the matter, but said there is a special task force within Sinochem working on personnel changes.

“There’s no change in ownership of operations of Syngenta in China,” said McConville. (Reporting by Dominique Patton in BEIJING and Chen Aizhu in SINGAPORE; editing by Christian Schmollinger) 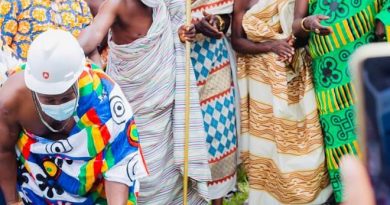 Coming Up Soon, The First Picture Of Heaven’s Gate By Rudolf Ogoo Okonkwo