NIGERIA The naira NGN= is seen stable next week after it eased slightly as foreign inflows slowed earlier this week following rising uncertainty ahead of presidential elections on Feb. 16, traders said. The naira traded between 362.50 and 363 on Thursday, weaker than 362 per dollar, where it had been quoted for more than a week, traders said, citing a slowdown in foreign inflows at the start of the week.

President Muhammadu Buhari suspended the country’s chief judge last Friday weeks ahead of election, causing investors to pause inflows temporarily. This week investors have shrugged off the action and are focusing on the ease of repatriating profits. KENYA The Kenyan shilling KES= is seen firm against the dollar in the coming week due to dollar supply from offshore investors buying government debt and securities at the Nairobi securities exchange matching demand from manufacturers and oil importers buying dollars to meet end month obligations, traders said.

Commercial banks quoted the shilling at 100.65/85 per dollar, compared with 101.10/30 at last Thursday’s close. “Dollar inflows in the stock market, securities, fixed income, there is a lot of dollars in the market…given its the last day of the month, normally we see a lot of demand but with this supply, I don’t expect weakness from our currency,” said a senior trader from one commercial bank. UGANDA The Ugandan shilling is seen trading firmer as inflows from commodity exporters and non-governmental organisations (NGOs) offer support. At 1103 GMT commercial banks quoted the shilling at 3,665/3,675, compared to last Thursday’s close of 3,675/3,685. “I would expect the shilling to trade toward the stronger side because NGO and commodity sector inflows around end of month are usually substantial,” said a trader from a leading commercial bank. The shilling, he said, would likely oscillate between 3,650-3,680 over the next one week. TANZANIA The Tanzanian Shilling is expected to depreciate next week due to high demand for dollars mainly driven by the manufacturing and energy sectors. Commercial banks quoted the shilling at 2,370/2,385 against the dollar compared with last Thursday’s close of 2,307/2,317.

“There is high demand for dollars and the supply is limited. There are no major sources of inflows for dollars … The interbank activities are almost dead,” said a senior trader at one commercial bank.

The shilling, he said, would likely depreciate to around 2,400 against the dollar.

ZAMBIA The kwacha is expected to remain range-bound in the coming week due to positive market sentiment arising from the currency’s recent stability. At 1035 GMT on Thursday, commercial banks quoted the currency of Africa’s second-largest copper producer at 11.9000 per dollar from a close of 11.9400 a week ago.

“For as long as dollars poured into the market are met by demand, this balance will persist,” the Zambian branch of South Africa’s First National Bank (FNB) said. (Reporting by Chijioke Ohuocha, John Ndiso, Elias Biryabarema, Nuzulack Dausen and Chris Mfula; Compiled by Maggie Fick, editing by Ed Osmond) 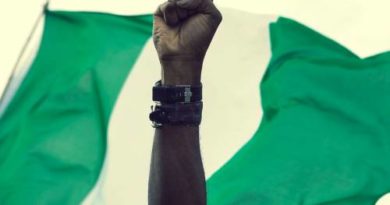 Between The Bad Guys And The Good Guys, Who Wins? By Ayo Moses

PDP has alleged that there is apprehension in the APC over the possible disqualification of Osagie Ize-Iyamu.

Kola Ologbondiyan, the spokesperson for the PDP said there is trouble in Ize-Iyamu’s campaign.

Ologbondiyan claimed that governors on the platform of the APC have abandoned Ize-Iyamu over his nomination issues.
#Legitnews
#IvTom ... See MoreSee Less

You are living a pipe dream. POI is coming

PDP is a piety Nawahoooo

Stop misinforming the public because of ur hatred for APC. A bag of rice is not N42,000 but N41,900.
APC HAS DESTROYED NIGERIA.VOTE 4 OBASEKI ... See MoreSee Less

I'M neither for PDP nor APC ,I'm for the better man for the job
OBASEKI!!! ... See MoreSee Less

You are my kind of person

OBASEKI is PDP PDP is OBASEKI they are inseparable. with OBASEKI/PDP good to go.

Talking of the better man, that is the indefatigable, the erudite the man whose time have come. Pastor Ize-Iyamu. POI is coming

Talking of better man, he can never be Obaseki who got admission to UI through the back door!. That is not the kind of leader we want for our youths to emulate!. Only God knows what and other crimes he has committed that has yet to be known to us !.He is certainly a corrupt man !.

Trump treated the pandemic as “The Apprentice: COVID Edition”: It’s blowing up in his face