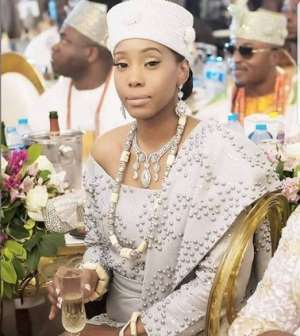 As usual, the swag king will not stop showering his wife love at its peak. The Oluwo of Iwo land always have a way of showing the world his swag.

Recently, he took to his instagram page to celebrate his wife and also enlighten people about respect for women.

He wrote, “Queen Chanel of Iwoland soooo fresh sooooo clean, The beauty and pride of African Royalty…. The only African Queen with the Crown to showcase how our Great Progenitor Oduduwa crowned Olokun his Queen (Yeyemoso) this is to bring back our beautiful forgotten history to our children. NB: please don’t listen to detractors that are peddling lies that this is desecrating our culture!! Our great father Oduduwa loved and respected his Queens and he crowned them, not like today that people who don’t know history try to scare you ! The only crown a king won’t put on a Queen is Aree or isenbaye crown… #Ade lafin mo Oba, ki lafin mo Olori ???? The Crown is the symbol of a king …. what is the symbol of a Queen ??? Oduduwa brought love and taught us to respect women. Please ask any first class ancient king one question…. Did Oduduwa crowned his wife Olokun ?? You can also Google Ori Olokun (head of Olokun) you will see the Crown on her head, Our culture and tradition is beautiful not scary ! Show our culture with love as a king and love the people and they will love you back…. scare them as a king with our culture and tradition and they will be scared of you and the result today is…. our children as taken after a culture that shows more love !!!!”

What Can Buhari Do Differently In His Second Coming? By Ogochukwu Paul

You may wish to go to court to testify...partners in crime.

A deadly virus for that matter