The African Action Congress (AAC) has given its verdict on the series of ‘The Candidates’, a presidential town hall co-production between Daria Media and the Nigerian Television Authority (NTA), with support from the MacArthur Foundation.

Anchored by Kadaria Ahmed over the past four Wednesdays in January, presidential and vice-presidential candidates of the Young Progressives Party (YPP), All Progressives Congress (APC), African Action Congress (AAC) and the Peoples Democratic Party (PDP) have all featured on the programme.

A statement by Dr. Malcolm Fabiyi, Director-General of the Sowore 2019 Campaign, issued on Thursday, noted that “there was one winner from the series and that was Omoyele Sowore, presidential candidate of the African Action Congress”.

The statement continued: “Although Buhari and Atiku have artfully dodged a frontal debate with Sowore, ‘The Candidates’ placed all the candidates on the same platform, with the same interviewer. And for two hours, Nigerians had the opportunity to hear the presidential and vice presidential candidates of the four leading political parties in the country talk about their plans and programmes for Nigeria, as well as answer questions about their past. The town hall series was revealing. Nigerians have now had an opportunity to weigh their candidates for the highest offices in the land.

“Buhari demonstrated a worrying cluelessness about many of the goings on in the country.  He frequently had to be prompted by his Vice President, as he failed to hear or comprehend most of the questions asked. Buhari seemed neither mentally present nor interested in Nigeria. The APC has no ideas for how to steer Nigeria away from the crippling problems of insecurity, power sector failures, growing unemployment, farmer-herdsmen conflicts and lack of affordable healthcare access that continues to plague Nigeria. One could almost be moved to sympathy for Buhari after his catatonic performance, if it weren’t for the vicious wickedness that is the intention of foisting a second term that would extend and double our misery, on Nigerians.

“Kingsley Moghalu and his running mate demonstrated that their ideas were as dated as those of the establishment they seek to replace. There were no bold plans to create jobs or to light up NIGERIA. There were no clear policy positions on how to address the challenges of insecurity and corruption. The town hall session also revealed the glaring lack of preparation of his vice presidential candidate. Suffice to say that his policies and heavy reliance on his previous stint as the deputy governor – a position that makes him complicit and responsible for a lot of the financial rot that Nigeria faces today – reveal him as being part and parcel of the establishment.

“Atiku and Obi proved yesterday, that all of our fears that electing the PDP would simply replace one layer of corruption with another more complex and pernicious one, were true.  Atiku could not satisfactorily explain his part ownership of a company that did extensive business with the Ports Authority when he was still in the Nigerian Customs service. He could not explain the money laundering indictments and allegations made by the US Senate Homeland Security Committee. Peter Obi squirmed and faltered as he attempted to convince Nigerians that he was doing Anambra state a favour when he invested billions of the state’s money in a venture in which his family’s NEXT International Nigeria, was a major shareholder. It is now clear that Atiku and Peter Obi complement themselves well. They are two vultures with the same corrupt feathers. They had no clear plans for any of Nigeria’s most pressing issues. They were clear on one point though – they were willing to offer amnesty to all corrupt persons.

“We are thankful that despite the attempts to prevent Nigerians from seeing and contrasting Sowore with Buhari, Atiku and others on the national stage, the NTA – Daria Media Town Hall series provided objective points of contrast. Sowore demonstrated a masterful grasp of Nigeria’s issues. He showed amazing clarity in his vision for the country. Nigerians were able to learn first-hand that Sowore has been involved in the fight to move Nigeria forward for 30 years. Nigerians saw the courage of his plans and the strength of his conviction. Nigerians were reminded that he is the only candidate that committed to increasing power by 17,000 MW, doubling Nigeria’s road network from 200,000 km to 400,000 km, boosting our rail system from 3,700 km to 8,000 km, creating 5 million new jobs, paying workers a living wage of 100,000 Naira and creating an enabling environment for businesses to thrive.

“Nigerians also got to see that in Dr Rabiu Rufai, Sowore has a running mate who equally understands Nigeria’s challenges and has the intellect, integrity and political will to be a strong partner in the task of positively transforming Nigeria.”

AAC went on to urge Nigerians to make a clear choice on the nation’s leadership, stating that “Nigerians now know what their options are. We have seen all of those offering themselves for the leadership of our nation. The choice is clear. There is only one team that can move Nigeria forward, and that is the Sowore-Rufai team of the African Action Congress!” 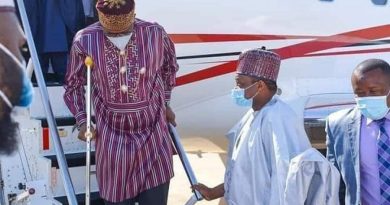 Amaechi Suffers Hairline Fracture, Walks With the Use of Crutches – Legit.ng

No FSARS personnel will be issued firearms henceforth ― Edgal

Preasure mounts on Chief Imam to sack his spokesperson