Jan 29 (Reuters) – British shares ended a five-day losing streak on Tuesday as investors sought safety stocks amid worries about the U.S.-China trade spat and ahead of a parliamentary vote on Brexit.

Prime Minister Theresa May called on Britain’s lawmakers to send a message to the European Union that they would support her plans to renegotiate the Brexit divorce deal.

The midcaps were on course for their biggest monthly gain in five and a half years, with the main index on course for its best month since last May.

London stocks outperformed their euro zone peers, which were pressured by a series of U.S. corporate profit warnings overnight and after the United States announced criminal charges against Huawei days before trade talks.

Retail stocks, led by a 5.7 percent jump in British American Tobacco after a rating upgrade, climbed to levels not seen since late November and were the biggest support to the main index.

Defensive stocks seen as a safer bet during uncertain times, including utilities, also provided a boost.

The UK parliament will vote later on Tuesday on what changes lawmakers want May to seek to her Brexit deal with Brussels, in another attempt to give structure to the country’s exit from the EU.

“Today’s vote is by no means the end of the Brexit saga. In fact, it will open the door to further debate and discussion,” said London Capital Group analyst Jasper Lawler.

Against the trend, fund supermarket Hargreaves Lansdown stumbled 6.3 percent on its worst daily performance since May 2017 after reporting a drop in assets under administration.

“Ultimately traders have an almost blind belief that there isn’t going to be a no-deal (Brexit) scenario even though that is a very real possibility.”

Parliament has been in deadlock since voting down May’s Brexit plan, agreed after months of negotiation with the EU.

“I think we are in a similar situation to how the FTSE 100 and the pound behaved in the run-up to the (membership) referendum in June 2016 where the markets weren’t really correctly pricing in certain possibilities,” added Madden.

Gains in midcaps were restricted with Royal Mail – a former FTSE 100 constituent – slumping 13.3 percent to a life low on a downbeat trading update and PZ Cussons tumbling 15 percent to 9-1/2-year low after a profit alert.

Domino’s Pizza slipped 8.7 percent after guiding to profit at low end of the consensus range. 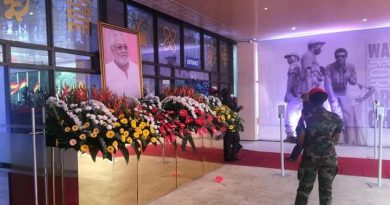 As Rawlings journeys home to his maker

Saraki: It’s Unfortunate That After 22 Months In The Senate, A Man Like Tinubu Still Lacks Understanding

An Accra Circuit Court has adjourned to August 31, the case of Mohammed Aminu Bonkanu, who allegedly collected over GH¢1.